Though policies are in place, Bharat Forge says that attitudes need to change too
A FORCE Report

Yelahanka: With ‘Atmanirbhar Bharat’ becoming the theme song for Aero India 2021, it was only natural that the issue come up in all discussions at the show. In the morning packed with meetings with representatives of its potential customers (Indian armed forces) and one with Rosoboronexport for a naval gun, president and CEO, Bharat Forge Defence and Aerospace, Rajinder Bhatia squeezed in a few minutes to talk about the importance of self-reliance and Bharat Forge’s role in realisation of this vision.

“It is true that procurement policy has evolved in the last two years. There is more clarity and focus, but the acquisition cycle needs to be shortened,” he told FORCE in an exclusive interaction. “Hence, while the policy directive is in place, the implementation remains tardy. Basically, we need a change in attitude with regards to framing of qualitative requirements, trials and evaluation process. With the advance in technology, it is no longer necessary to base evaluation purely on physical trials. Physical trials should only be one part of evaluation. Other part should be through simulation. And the user must also have confidence in manufacturers’ certification.”

According to Bhatia, the long acquisition process not only leads to cost escalation, but also forces the services to induct systems which are nearing obsolescence.

On Bharat Forge’s programmes, he said that the company has interests in all the three domains of land, air and sea. Of these, land remains its strong point, given Bharat Forge’s success with artillery systems. However, this year, it is focussing on protected vehicles called Kalyani M4. An armoured personnel carrier, Kalyani M4 has the capacity to withstand 50kg blast on its sides and 14kg in the undercarriage. Last year the vehicle completed successful trials in Ladakh and is on order by the Indian Army.

Bharat Forge intends to pitch the vehicle to the central armed police forces (CAPF) as well. The outreach to the CAPFs will also include a sniper rifle and a dual technology mine detection system which combines ground penetrating radar with magnetic sensors.

Also present at the show is its aerospace portfolio led by small gas turbine aero engines, which are ideal for ‘small unmanned aerial vehicles,’ said Bhatia. The company is also quite optimistic about its joint venture with Rafael Advanced Defence Systems, under which it is looking forward to building some part of the Derby MkIII missile in India. Though currently aimed at the Indian armed forces, eventually Bhatia is hopeful of being able to export the missile from India to ‘friendly foreign countries.’ 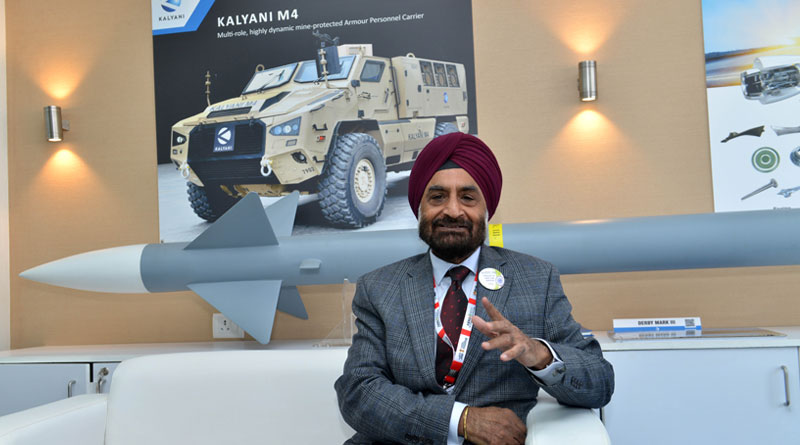 Though policies are in place, Bharat Forge says that attitudes need to change too

With ‘Atmanirbhar Bharat’ becoming the theme song for Aero India 2021, it was only natural that the issue come up in all discussions at the show