London, Apr 10 (ANI): A mystery cameraman has filmed two fighter jets whizzing over the M5, chasing, what looked like a UFO.

The 30-second clip is believed to have been taken from a West Midlands service station car park.

"This is one of the best videos I've seen. It could be a new drone - that might explain the military jets," the Sun quoted expert Nick Pope, who probed UFO sightings for the MoD.

"But you don't normally test-fly secret projects in daylight. Alternatively, this could be the real thing - a UFO in our airspace and military aircraft scrambled to intercept, probably due to it being tracked on radar," he added.

The MoD did not comment on the alleged sighting, but confirmed it would scramble jets to meet an air threat.

"We are not aware of any reports of unidentified aircraft near the M5," said West Midlands Police. (ANI)
A

Is this REALLY a UFO being chased down the M5 by RAF fighter jets? 'Video footage' captured at a service station

Footage of two fighter jets chasing what appears to be a UFO has emerged.
The 30-second clip, thought to be shot from a West Midlands service station park, reveals the saucer-shaped craft zipping over the M5, with the two jets in its wake.
Former Ministry of Defence UFO expert Nick Pope told The Sun: ‘This is one of the best videos I’ve seen. 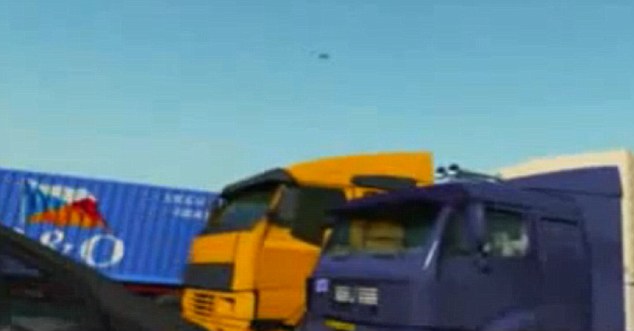 Mystery: The saucer-shaped object is seen hovering in the sky above HGVs on the M5

Pursuit: Two military jets arrive on the scene - hot on the trail of the mystery object

The real thing? The orb hangs in the sky, prompting UFO expert Nick Pope to claim it is one of the best sightings he has ever seen

‘It could be a new drone – that might explain the military jets.
‘But you don’t normally test-fly secret projects in daylight. Alternatively, this could be the real thing – a UFO in our airspace and military aircraft scrambled to intercept, probably due to it being tracked on radar.’The MOD confirmed it would dispatch fighter jets to combat any air threat but would not comment on the footage, which was shot by an unidentified cameraman.

Last edited by a moderator: May 10, 2015
You must log in or register to reply here.
Similar threads
How Did India Manage to Build an Advanced Fighter Jet Like the Tejas?
AFTER JF-17 FIGHTER, CHINESE J-11B JET COULD BE NEXT ON PAKISTAN’S SHOPPING LIST
China's first stealth jet looks an awful lot like the US's first stealth fighter — here's how the J-20 and the F-22 stack up
Pakistan Sets Eyes on China’s New J-35 Fighter Jet That Takes on America’s Best F-35
Share:
Facebook Twitter Reddit WhatsApp Link