New Delhi : Puppetry has been vital to traditional performing arts in India and abroad, having laid the foundation of visual and cinematic arts. Now a 15-day puppet festival has brought 10 groups from places as diverse as Iran, Taiwan, Afghanistan and the US under one roof for Indian audiences.

Ishara International Puppet Festival is showcasing the contemporary genres of puppetry around the world and the way the tradition has evolved over time.

Conceived in 2001 by the Ishara Puppet Theatre Trust led by noted puppet theatre exponent Dadi Pudumjee, it is produced by Teamworks. It is hosting 10 international groups and two troupes from the country this year.

"This year, the festival is all set to spread the magic of puppetry in India with groups and artists from US, Germany, Iran, Taiwan, Afghanistan, Israel, Australia, Italy, Bulgaria and Ireland, besides the Indian puppet theatres," Pudumjee said.

"It focuses on new contemporary work from India and abroad as a platform to further multimedia arts in the country."

The festival spread across the capital and NCR opened Wednesday at the Epicentre, a culture hub in Gurgaon with a show, "Hamara Circus" by Md. Shamim's Kutch Kutch Theatre. Shamim tried to recreate "the circus of survival that human beings have to play out everyday".

The circus was complete with dancers, jugglers, clowns and all other entertainers - in acts that people put on to stay in the game, Shamim, a young puppeteer, said explaining his project."

The festival will unveil in the capital Feb 3 with a performance of "A Life in Her Day", a US production featuring leading comedienne Hilary Chaplain at the India Habitat Centre.

A hilarious, rib-tickling, one-woman show, Chaplain creates magic by clowning around and transforming ordinary items like a lamp post and paper towels into human objects.

The theatre narrates the story of a quirky, single woman, who meets a man, falls in love, gets married, goes on a Hawaiian honeymoon and has a baby - all in a day!

"The festival this year is more innovative in technique. The theatres are using a wide range of new mediums like paper cuts, everyday objects and shadow puppets in their projects...India has a strong tradition of puppetry. A few groups have assimilated contemporary techniques while many are improvising on materal within their mosaic of religion, myths and trdaitions of performing arts," Pudumjee told IANS.

Pudumjee, one of the modern puppet theatre pioneers in India, said "in several cities, puppeteers have revived old traditions which have disappeared in a format in a renaissance like form".

An important performance at the festival is "Bozak-e-Chini" (The Goat and the Wolf), a rendition of an Afghan fairy tale by the Parwaz Puppet Theatre Feb 7 in the capital.

Directed by Abdul Haq Haqjoo, the ancient children's fable is about a goat, and her three children, who live in a jungle. One day she has to leave her children alone, but before leaving she warns them of the dangers of opening the door to strangers.

Despite her warnings, a greedy wolf that joins forces with a cunning fox, a jackal and a raven, manages to trick the three kids for dinner. The brave mother goat takes on the villains, before the king of all animals, the Lion, delivers his verdict.

"This is our second performance in India...The first one was in 2010 at the National School of Drama where we had showcased Bozak-e-Chini. We are excited that we will get a chance to show it again here," said Ahmad, a member of the Parwaz Puppet Theatre group.

Another highlight of the festival is the "The Earth & The Universe" from Iran Feb 5 in the capital. Performed by Yas-e-Tamam Theater Group and directed by Zahra Khyali Sabri, it is themed on seven stories of life, faith, freedom, miracles, biblical characters and anecdotes from the 13th century Sufi poet Rumi's much loved book "Masnavi".

The Germany-based Matthias Kuchta German-India collaboration will stage "Sanjay & His Master" directed by Pudumjee Feb 4. Sanjay, a young man, leaves home and becomes a musician in Varanasi under the famous court-musician Ananda. He falls in love with his teacher's daughter Nandita. Then the king decides he needs only one musician in his court. So Sanjay and his master have to compete in a concert.

Adapted from an old Buddhist tale, it comments on finding one's place in the world. The Indo-German puppet-music-theatre-project brings Western and India artists together.

The festival will he held Feb 3-13 at the India Habitat Centre and Feb 5-15 at Epicentre.

The show is in Delhi
www.IsharaPuppets.com ---- Calender

Puppetry was very much in vogue when I was a child.

Nothing to beat a good puppet show! 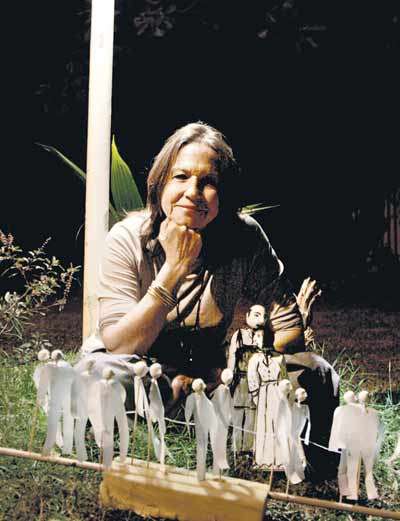