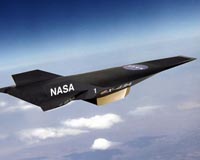 by Staff Writers
Columbus OH (SPX) May 01, 2009
When a jet is flying faster than the speed of sound, one small mistake can tear it apart. And when the jet is so experimental that it must fly unmanned, only a computer control system can pilot it.

Ohio State University engineers have designed control system software that can do just that - by adapting to changing conditions during a flight.

Government agencies have been developing faster-than-sound vehicles for decades. The latest supersonic combustion ramjets - called scramjets - burn air for fuel, and could one day carry people to space or around the world in a matter of hours.

The recent success of NASA's X-43 hypersonic jet has spurred research into the control systems for these vehicles, said Lisa Fiorentini, doctoral student in electrical and computer engineering at Ohio State University.

She and associate professor Andrea Serrani are developing a new control system in collaboration with the U.S. Air Force Research Laboratory (ARFL) at Wright-Patterson Air Force Base in Ohio.

In the current issue of the Journal of Guidance, Control, and Dynamics, they report that their controller performed flawlessly in computer simulations of flight maneuvers.

The controller both guides the jet along its trajectory and keeps it stable during a flight, Fiorentini explained. Sensors measure factors such as altitude, velocity, and acceleration, and the controller calculates whether any adjustments need to be made to keep the jet stable and on course. Then actuators carry out the controller's commands - for instance, throttling up the engine if the jet needs to accelerate.

"Because these vehicles are unmanned right now, we have to prepare everything ahead of time - anticipate every possible in-flight event," she said.

"And the controller has to work really fast. At 10 times the speed of sound, if you lose just one second, the jet has gone far, far off course."

What sets the Ohio State control system apart, Serrani explained, is that it allows for flexibility: it adapts to changing conditions during a flight.

"The truly remarkable feature of our approach is that we consider a realistic, physics-based vehicle model within our stability analysis, using a highly sophisticated controller," he said.

"Since we are working with Wright-Patterson, we have access to the most sophisticated model available for this aircraft," she said.

The Ohio State engineers derived equations that describe a scramjet's flight dynamics and behavior. Then, given the vehicle model by their partners at Wright-Paterson, they created a set of algorithms that could ultimately be built into a scramjet's on-board computer.

Today's experimental scramjets are not merely supersonic - meaning they fly faster than the speed of sound, or Mach 1 - but hypersonic, meaning they fly at Mach 5 or faster. The most recent X-43 flight in 2004 neared a speed of Mach 10 (Mach 9.8, or 7,546 miles per hour).

Scramjets are shaped to scoop oxygen from the atmosphere during flight in order to ignite the hydrogen fuel already on board. This eliminates the need for heavy external oxygen tanks, and enables scramjets to carry more cargo than a typical rocket.

NASA had explored scramjets as a successor to the Space Shuttle for trips to the International Space Station. The X-43 project closed in 2004, as the space agency shifted its priorities toward a return to the Moon.

But the technology is still under development in military and commercial sectors. Scramjets could deliver missiles to mobile targets; they could also carry people halfway around the world in less than an hour.

For this study, the engineers simulated two flight situations. In the first, simpler case, the scramjet had to climb from a level flight to 13,000 feet in a little less than six minutes. In a second, more complicated maneuver, it had to start at a few degrees off-kilter from a level flight, and then climb 25,000 feet in about four minutes.

In both simulations, researchers recorded the controller's tracking errors as the jet executed its maneuver. Then they compared the results to simulations using a controller they had developed previously - one that did not have adaptive capabilities built in.

For the more complex maneuver, the non-adaptive controller failed - the simulated jet spun out of control and crashed in less than four seconds. The new adaptive controller was able to guide the jet to its new altitude without incident.

The Ohio State and AFRL engineers are continuing to refine the controller. The next improvement will add some safety limits, Fiorentini said. Scramjets need to maintain the right amount of airflow to the engine, she explained, and if they rise too fast, the engine may stall in mid-air.

nice find lethal force,what is the status of our own scramjet,any new news?


in 2001 first Scramjet test in Australia was failed, really a good news after that.

This is a link of an old report from FuturePundit, which tells about the X-43A scramjet's successful test in 2004.