Soldiers deployed across the Zimbabwe capital Harare and seized the state broadcaster on Wednesday after 93-year-old President Robert Mugabe's ruling ZANU-PF party accused the head of the military of treason, prompting frenzied speculation of a coup.

Just 24 hours after military chief General Constantino Chiwenga threatened to intervene to end a purge of his allies in Mugabe's ZANU-PF, a Reuters reporter saw armoured personnel carriers on main roads around the capital.

Is this going to end up like the last coup in Turkey that ended up a ploy by the regime to eradicate all internal opposition?

Armand2REP said:
Is this going to end up like the last coup in Turkey that ended up a ploy by the regime to eradicate all internal opposition?
Click to expand...

Armand2REP said:
Is this going to end up like the last coup in Turkey that ended up a ploy by the regime to eradicate all internal opposition?
Click to expand...

Zimbabwe: 'This is not a military takeover' - army official denies coup in address to nation 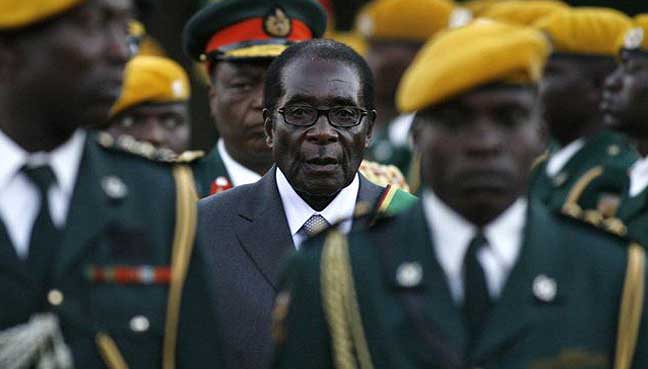 From Rhodesia to Zimbabwe

April 18, 1980: Rhodesia gains independence after 90 years as a British colony, taking new name Zimbabwe. The 1972-1979 war of independence between nationalist blacks and the minority white regime led by Ian Smith has left 27,000 dead.

February 17, 1982: Nkomo, accused of plotting a coup, is dismissed. Armed resistance in his stronghold of Matabeleland is met with bloody government repression. At least 20,000 die.

February, 2000: Start of a violent campaign of seizure of white farms by squatters and pro-Mugabe war veterans.

More than 4,000 of the 4,500 white farmers are stripped of their land, with the support of the regime, with the official goal of correcting inequalities dating back to the colonial era.

March 2002: Mugabe is re-elected president in a poll marred by violence and widely denounced as rigged. Western sanctions are imposed.

March, 2008: ZANU-PF is defeated by tMorgan Tsvangirai’s Movement for Democratic Change (MDC) in parliamentary polls. Tsvangirai wins the first-round presidential vote, but withdraws from the second round, citing violence against his supporters. Mugabe is inaugurated for a new term.

August 2013: Mugabe is declared re-elected in July 31 elections with 61 percent of the vote, against Tsvangirai’s 34 percent.

Tsvangirai describes the election as a “huge farce” and “null and void”.

The EU, however, starts normalising relations with Zimbabwe, lifting most of its sanctions.

He then seeks to quell infighting over his successor by purging his foes.

April 14, 2016: MDC gathers more than 2,000 demonstrators in Harare in the biggest march organised for a decade against Mugabe.

November 6: Mugabe fires Vice President Emmerson Mnangagwa, long considered his probable successor, who has close ties to the military and the powerful independence war veterans. He flees the country.

November 14: Several tanks are seen by witnesses moving near Harare.

November 15: Military announces that Mugabe “and his family are safe and sound.” Declares it is only “targeting criminals around him who are committing crimes” and insists this is not a military takeover. Military vehicles block road outside parliament and are deployed near ZANU-PF offices.

Mugabe’s reign is over ! Stunning news for all the African continent and a message for all the younger african dictators . Hopefully.

Most people in the country have not known a time without Mugabe, who has been at the epicentre of public life since coming to power in 1980 on the country's independence from Britain.

The nation was left stunned after the ailing leader was confined to his residence late Tuesday as soldiers took up positions at strategic points across Harare and senior officers commandeered state television.

And though nothing has been heard from Mugabe or his wife Grace directly since the start of the army operation, many Zimbabweans are hopeful that the crisis will mark the beginning of a more prosperous future.

"Our economic situation has deteriorated every day -- no employment, no jobs," Tafadzwa Masango, a 35-year-old unemployed man, told AFP.

"We hope for a better Zimbabwe after the Mugabe era. We feel very happy. It is now his time to go."

Harare's residents have largely ignored the military presence on the streets and continued commuting, socialising and working much as normal, while analysts speculated that Mugabe and the army could be negotiating a transition.

Derek Matyszak, an analyst at the Pretoria-based Institute for Security Studies, said he expects Mugabe and the military are thrashing out a handover to a new head of state.

"I think Mugabe can still stay in the country. I think they would like to present him as a liberation icon and accord him due respect.

"The difficulty, and this has always been the difficulty for the Mugabe family, is guaranteeing Grace Mugabe's safety... on the demise of Robert."

The international community will also be watching the next phase of the crisis closely.

On Wednesday the African Union issued an unusually terse statement that said the situation on the ground "seems like a coup" and called on the military to pull back and respect the constitution.

Britain, Zimbabwe's colonial ruler until independence, called for calm and warned against handing power to an unelected leader.

"Nobody wants simply to see the transition from one unelected tyrant to the next," said British foreign minister Boris Johnson.

Zimbabwe's army was set on a collision course with Mugabe last week when he abruptly fired his vice president Emmerson Mnangagwa -- a lynchpin of the defence and security establishment.

Mnangagwa, 75, was previously one of Mugabe's most loyal lieutenants, having worked alongside him for decades.

But he fled to South Africa following his dismissal and published a scathing five-page rebuke of Mugabe's leadership and Grace's political ambition.

Army chief General Constantino Chiwenga gave an unprecedented press conference on Monday, flanked by dozens of officers, and warned Mugabe that he would intervene if the president continued to purge the ruling ZANU-PF party.

Mnangagwa has been embroiled in a long-running feud with Mugabe's wife Grace, 52.

Both were seen as leading contenders to replace Mugabe but Mnangagwa had the tacit support of the armed forces, which viewed Grace -- a political novice -- with derision.

In a sign that the military was purging the first lady's backers, a Grace loyalist widely reported to have been detained by the army appeared on state TV late Wednesday.

Kudzai Chipanga, leader of the ZANU-PF's youth league, apologised for criticising Chiwenga following the general's threat to intervene against Mugabe.

"I kindly request General Chiwenga to please accept my apologies on behalf of the youth league and myself. We are still young people, we are still growing up. We learn from our mistakes," said Chipanga, who shifted uneasily as he read the statement.

Some real time travelling there