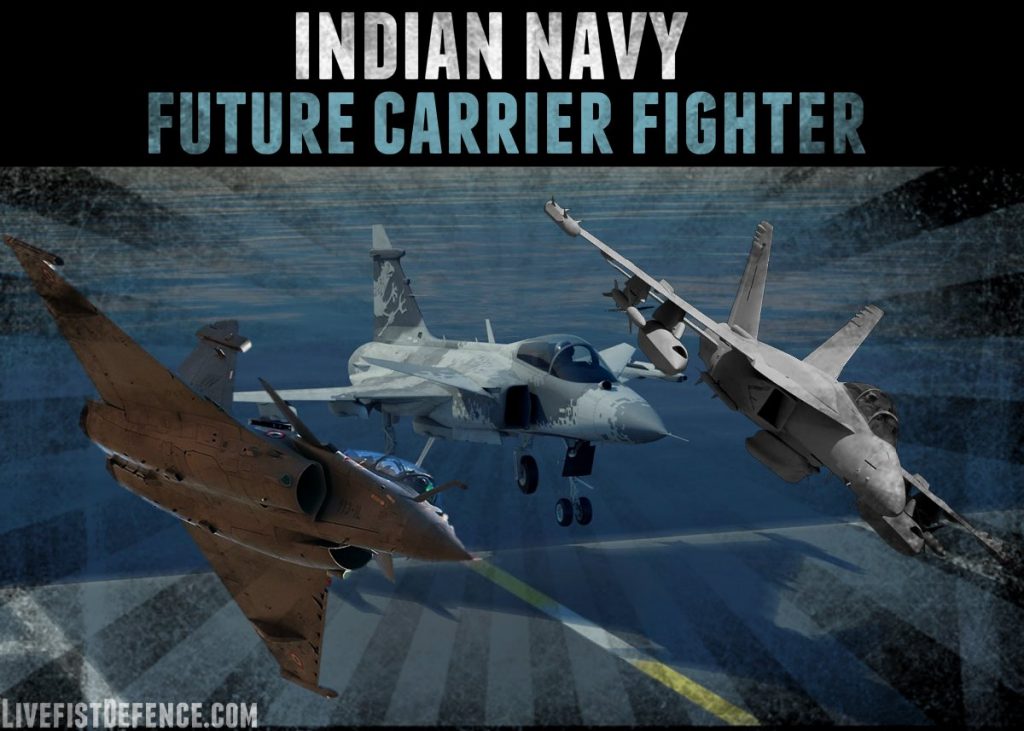 If the doomed six-way M-MRCA contest was fierce, expect a great deal of blood in the next two jet fighter competitions: a Make in India single engine fighter face-off between Saab’s Gripen E & LockheedMartin’s F-16 Block 70 and the Indian Navy’s future carrier fighter contest, that, like the former, has narrowed down to a straight two-horse race (the Indian defence minister made it clear yesterday that the navy was only interested in twin-engine platforms) with the only two operational aircraft of their kind: Boeing’s F/A-18 Super Hornet and the Rafale M.

While Saab and LockheedMartin get set for a serious battle to build their jets in India, it is the latter, the naval fighter contest, that has the capacity to dictate what could be India’s largest ever fighter acquisition — dwarfing the M-MRCA at every conceivable level. It isn’t difficult to fathom the power that resides in the Indian Navy’s decision, but Livefist understands that it is this acquisition that provides the only solid guidance on which the Indian Air Force could choose its next twin-engine jet too. We break down the state of play.

First off, both Boeing and Dassault have four months left to respond to the Indian Navy’s request for information. The RFI published by the navy recently was unusually long and with more questions than it has ever asked before on a preliminary enquiry. ‘This is an RFI that you could call a mini-RFP in many ways,’ quips a Dassault Aviation executive. ‘It’s very detailed. The Indian Navy knows what they want.’

Livefist can confirm that both companies have been formally informed that the requirement for a twin-engine Make in India fighter will be floated once the Indian MoD finalises and announces its strategic partnership policy (Minister Parrikar yesterday suggested there was only ‘5% work left’). Both companies also concur that the deal will be to supple well over 150 jets to the Indian Air Force and Indian Navy, and a focus to export to the global market. It is the option to build for the Indian Navy too (57 fighters) that gives Boeing and Dassault near exclusive rights to the competition, and could guide how it plays out if the project really gets off the ground (and now, most bets are off until it actually happens).

Dassault starts with an immediate type advantage with its 36 jet deal with the Indian Air Force. Boeing recognises the advantage, but isn’t overly concerned. Top executives said they had a five-way backhand to the perceived Rafale type advantage: One, that the US and France have very different cost structures (implying Boeing could have a much more competitive deal). Two, that 36 isn’t a large number and that the Rafale could be given a specialised strategic role. Three, and this is significant, the fact that the Super Hornet exists in only one type for both navies and air forces, and therefore offers its own degree of commonality if chosen by the Indian Air Force as well as the Indian Navy. ‘The Rafale M is slightly different from the air force Rafale variants. The Super Hornet is exactly the same jet for both operators,’ a Boeing executive tells Livefist. Four, and this has been reported before, Boeing says it will be replying to the Indian Navy’s RFI mentioning that it has done some simulation modelling and is close to proving that the Super Hornet is fully capable of STOBAR operations off a ski-jump. (Note, Boeing said the same during the M-MRCA when the Indian Navy was evaluating the MiG-29K — it said Super Hornets could operate off the Vikramaditya’s angled deck). Finally, five, Boeing flashes President Donald Trump’s interest in the F/A-18 — and solid future customers — as proof that the Super Hornet is far from being a sunset fighter. They hope the Advanced Super Hornet programme only underscores that future intent.

But let’s be clear. Dassault won’t be a spring chicken in this fight, and are more than aware of the stakes. They’ve managed to more than wet their beaks with the 36 jet deal, but are very hungry for what the kind of deal they didn’t manage to close. The lessons they learnt on cost competitiveness will be back as they face off against the American giant. Dassault’s CEO Eric Trapper is visiting the Aero India show this year. Senior executives on his team say the 36 jet deal provides Dassault with a solid foot in the door that should ideally guide the two big decisions on the twin engine Make in India deal as well as the Indian Navy’s future fighter contract. ‘You have reserved one type, and it is a formidable multirole jet. Why would you want to look at another? Doesn’t the Indian Air Force have enough inventory problems?,’ says a Dassault executive, with only a touch of irony (the M-MMRCA was the result of the twin decisions of the Indian Air Force declining to simply purchase more Mirage 2000s, and Dassault’s decision to replace its Mirage 2000 bid with the Rafale). Dassault envisions a fleet over over 200 Rafales in operation in India — 57 with the Indian Navy and the rest with the Indian Air Force, all of them built in India. But Dassault is clear — there’s no ‘Make in India’, if it can’t build at least 200 jets here.

Both Boeing and Dassault can be expected to pull out even more stops to see their type chosen by the Indian Navy, given that is there that the limits really come into play, forcibly narrowing the field on the IAF’s prospective twin engine requirement.

What about the Eurofighter Typhoon and MiG-35? Do they have a finger in this at all? Unlikely. The Typhoon’s defeat in the ultimately abortive M-MRCA has meant they’ve found it near impossible to make a credible comeback. The Typhoon’s lack of a naval variant (other than a very preliminary concept) pushes it well off the table should the air force-navy contracting become truly a united effort. The MiG-35, interestingly, has made a visible comeback at the Aero India show this year, but has been merely watching from the sidelines. The MiG-35 for the IAF twin engine line and MiG-29Ks for the Indian Navy is possible in theory, but given the Indian Navy’s insistence on looking out for new fighters, theory is likely where those jets will remain in India.
http://www.livefistdefence.com/2017...ngine-jet-bid-after-strat-partner-policy.html

Mamata is as bad as Lalu was for Bihar.

I fail to understand why we ain't giving a look at the SU-35? MiGs have always sucked big time due to lack of spares and their exorbitant cost if and when available, and maintenance issues. 30% availability of the MiG-29Ks is not a happy situation at present.

Mikesingh said:
I fail to understand why we ain't giving a look at the SU-35? MiGs have always sucked big time due to lack of spares and their exorbitant cost if and when available, and maintenance issues. 30% availability of the MiG-29Ks is not a happy situation at present.
Click to expand...

This is because there wont be much a gap remaining between the su-35 and the su-30mki after the proposed Super Sukhoi upgrade.
Another reason why we aren't going for the su-35 is because it is a heavy air dominance platform, a role which is already filled in by the su-30. The airforce is now looking for multi-role jets which can replace the Mig-27 and Jaguar by role.

The su-35's niche is already occupied by the su-30 so the airforce is not considering it.