Europe is seeking to maintain flight opportunities for its astronauts by buying Soyuz spacecraft from Russia.

The European Space Agency (Esa) has asked Moscow if it is possible to increase the production of the craft from four to five a year.
Esa could then buy its own vehicle, perhaps with the Canadians who are also looking for more seat opportunities.
The expected retirement of US shuttles in 2010/11 means fewer humans will be going into space in the coming years.
The venerable Soyuz craft will be the only way of getting to the International Space Station (ISS), certainly in the short term.
Simonetta Di Pippo, the director of human spaceflight at Esa, told BBC News she was hopeful a deal on Soyuz could be put in place for 2013.
"From '13 on, we would like to have at least one European astronaut per year flying and this can be done in various ways. One of the proposals we are putting on the table is to buy a full Soyuz," she said.

Discussions with the Russians on the subject took place at the recent International Aviation and Space Salon, MAKS 2009.
Various technical aspects would need to be studied, including the feasibility of ramping up production at manufacturer Energia and how the additional flight would be accommodated at the station's docking ports.
"The feeling with the Russians was really good," Mrs Di Pippo said. "We had a great meeting and I think in two or three months, we will be able to come out with a firm proposal."
Europe's astronauts are in the middle of an excellent run of opportunity at the moment.
Leopold Eyharts and Hans Schlegel flew to the station with the European Columbus science module in 2008. Christer Fuglesang and Frank De Winne are flying this year, with De Winne set to take command of the ISS in October.
Paolo Nespoli and Roberto Vittori will both launch next year. Vittori is set to fly on what presently looks to be the very last shuttle mission.
And Andre Kuipers has been selected for a six-month tour of the ISS which he will take up at the end of 2011. Beyond Kuipers, the European schedule is empty.
But Europe has just appointed six new candidates to its astronaut corps. Although the rookies must complete at least three years' basic training before even being considered for a mission, Esa has to plan ahead now to find them rides.
Additional 'room'
Mrs Di Pippo also said Esa was close to an agreement with the Americans on adding an extra European "room" to the International Space Station.
The intention is to leave one of the Multi-Purpose Logistics Modules (MPLMs) at the ISS.
The Italian-built MPLMs are the large cylindrical "packing boxes" put in a shuttle's payload bay when the orbiter flies logistics missions to the orbiting platform. They hold about 7-10 tonnes of supplies.
Once in orbit, the pressurised module is picked up by the shuttle's robotic arm and attached to a station docking port. The astronauts then unload its contents.
Normally, the MPLMs return home immediately with the shuttle, but with the orbiter fleet's retirement, the intention now is to leave the module known as Raffaello in space to provide extra volume.
"It's a great idea," said Mrs Di Pippo. "The issue though is that an MPLM was designed to stay in orbit for 15 days, so we would need to reinforce the protection from meteorites and debris. Nasa wants to consider it mainly as a storage compartment."
This role would allow volume to be freed up elsewhere on the station for science activity, principally in Columbus.
Mrs Di Pippo said she expected European engineers to arrive at Nasa's human spaceflight HQ in Houston, Texas, next month to begin the design work on upgrading Raffaello.
The MPLMs were manufactured by Thales Alenia Space (TAS). Its contribution to the orbiting project has been remarkable: more than half of the pressurised volume on the ISS has come from TAS.
Raffaello, however, will not need to return to Italy for the upgrade; the strengthening work can be done in the US.
Mrs Di Pippo said she hoped the idea could proceed under a barter arrangement with the US, whereby the European work would represent an "in kind payment" to replace equivalent cash purchases Esa currently makes for ISS services provided by the Americans.
"The launch is scheduled for September next year so we need to start work right now," said Mrs Di Pippo.
Source
BBC NEWS | Science & Environment | Europe looks to buy Soyuz craft 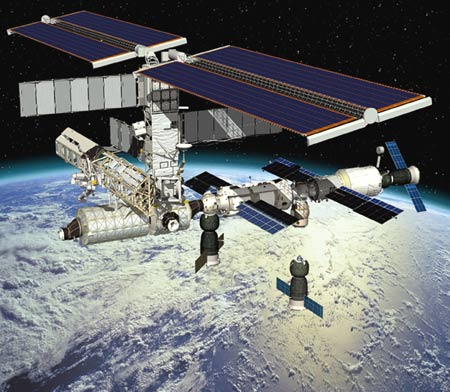