The Bulletin by Andrew Miller at The Oval
August 23, 2009

Amid scenes of delirium unwitnessed in South London since the unforgettable summer of 2005, England's cricketers reclaimed the Ashes on a tumultuous fourth afternoon at The Oval, as Australia's brave resistance - led by a century of incredible mental fortitude from Michael Hussey - was unpicked, wicket by wicket, minute by minute, until, at 5.47pm, and with an expectant crowd willing on the moment of glory, Hussey prodded Graeme Swann to Alastair Cook at short leg to spark the celebrations into life.
At the moment of victory, all of England's players rushed into a huddle on the edge of the square - all except for one, that is. In his moment of Test retirement, Andrew Flintoff's first instinct was to seek out and console the crestfallen centurion Hussey, whose 121 from 263 balls had given his side a hope of salvation, but whose careless running between the wickets during a fraught afternoon session had been the single biggest factor in their demise. By calling for the single that led to the run-out of his captain and resistance-leader Ricky Ponting for 66, Hussey is unlikely to recall this particular innings with any fondness whatsoever.

Inevitably, it was Flintoff who stole the show from the Australians. He could not be the tub-thumping batsman of old in this series, while his bowling - though thunderous at Lord's - faded cruelly as the concerns about his right knee began to mount. But as a presence, and as a man who can make things happen on a cricket field, his spell has scarcely diminished. In a moment that is sure to be replayed for years on end, he gathered a firm clip from Hussey, steadied himself as Ponting hesitated fatally, then unleashed a fast, flat, unerring swing of the arm that plucked out the off stump with Ponting a foot short.

Though the decision went to a replay, Flintoff was in no doubt. He raised his arms in his now-habitual Kodak pose, and waited to be enveloped by his jubilant team-mates. It was a moment eerily reminiscent of Gary Pratt's series-turning shy at Trent Bridge in 2005, when Ponting once again was the fall guy, and it uncorked the tensions in the crowd as surely as the champagne was uncorked in England's dressing-room some three hours later. It brought to an end an unnerving stand of 127, and it shattered Australia's collective will.

Five balls later, their batsman of the series, Michael Clarke ran himself out for a duck after a clip off the pads ricocheted to Andrew Strauss at leg slip, and Australia could not recover their poise. Though Hussey was badly dropped by Paul Collingwood at slip on 55 off Swann, in Swann's next over, Marcus North dragged his back foot out of the crease as he swung at a big ripper, and Matt Prior, having gathered well high to his left, flicked off the bails almost as an afterthought. Their target of 546 had become a distant figment of their imagination, and at 236 for 5, their only remaining hope was to bat out the final four sessions of the series.

Brad Haddin chose pugnacity as the means to reboot Australia's innings, and he signalled his intent with two fours in his first nine balls, including a fizzing cover-drive as James Anderson overpitched. But Anderson might have dismissed him three times in a single over, including a regulation clip to short midwicket that was spilled by the substitute, Graham Onions. As he and Hussey took their seventh-wicket stand to 91, an ever-anxious crowd began to shuffle in their seats. On 34, however, his luck finally ran out, as he advanced down the track to Swann and picked out Strauss with a lofted flick to deep midwicket.

It was to be the game-breaking moment. Strauss, usually the coolest of characters in the field, celebrated euphorically as The Oval erupted once more, and seven balls later, the end truly was nigh. Steve Harmison - hitherto muted on a pitch that did not suit his style - extracted enough life for Mitchell Johnson to fence to second slip, where Collingwood, to his relief and joy, finally held on. Then, when Peter Siddle played around his front pad to lob a simple chance to mid-off, Harmison had his second scalp in the space of 12 balls.

That quickly became three in 13, as Stuart Clark fenced nervily to Cook at short leg, and though Hilfenhaus averted the hat-trick with a stabbed defence straight back down the track, there was no longer any way to stem England's tide of emotion. With Harmison stalking to the crease with a predatory menace unseen in Ashes cricket for four long years, the crowd finally dared to proclaim the Ashes were coming home. Fifteen balls later, they were.

After the ease with which Australia's openers had pushed along at four runs an over on the third evening of the match, England's day of destiny had dawned with more than just a frisson of anxiety in the air. But Swann claimed the initial breakthrough at the end of his second over, tweaking a succession of sharply spinning offbreaks past Simon Katich's edge, before nailing him plumb lbw with the arm-ball.

Swann bounced for joy in the middle of the pitch as a massive roar of relief and ecstasy erupted from the stands, but almost immediately the fervour morphed into a respectful standing ovation for the incoming Ponting, in his 136th Test and almost certainly his last in England after four memorable Ashes tours.

Before he had faced a delivery, however, England had struck again, as Broad this time hurried Shane Watson on off stump and beat the inside-edge of his defensive prod. Watson did not seem best amused at the decision, but replays suggested there was nothing wrong with the appeal at all. For all of Watson's impressive form in five innings at the top of Australia's order, it was nevertheless the fourth time this series he had fallen in such a manner. Food for thought as he works on his new career as an opener.

At 90 for 2 and with a jittery Hussey at the crease, England swarmed onto the offensive, with Swann camping four men around the bat at all times and at one stage sending down 28 dot balls in a row as Hussey prodded and smothered with desperate determination. At the other end, Ponting's eagerness to play the pull was tempered by his wariness of the vagaries of the wicket, although whenever he was tempted, he executed the stroke with the mastery that has made it his calling-card for the past decade.

In the first over after lunch, Ponting laced a first-ball full-toss from Broad through the covers for four, then tickled Swann around the corner to bring up a battling and brilliant half-century from 76 deliveries. Broad subsequently received a warning for running on the pitch to deepen the crowd's growing concerns, who had just seen Collingwood at slip parry a rare Ponting edge with his left boot. But then up popped Flintoff, and once he'd had his say, there was no holding back the inevitable.
1

The Oval: Ending Australian might, England has won the Ashes series defeating the baggy greens by 197 runs.
Click to expand... 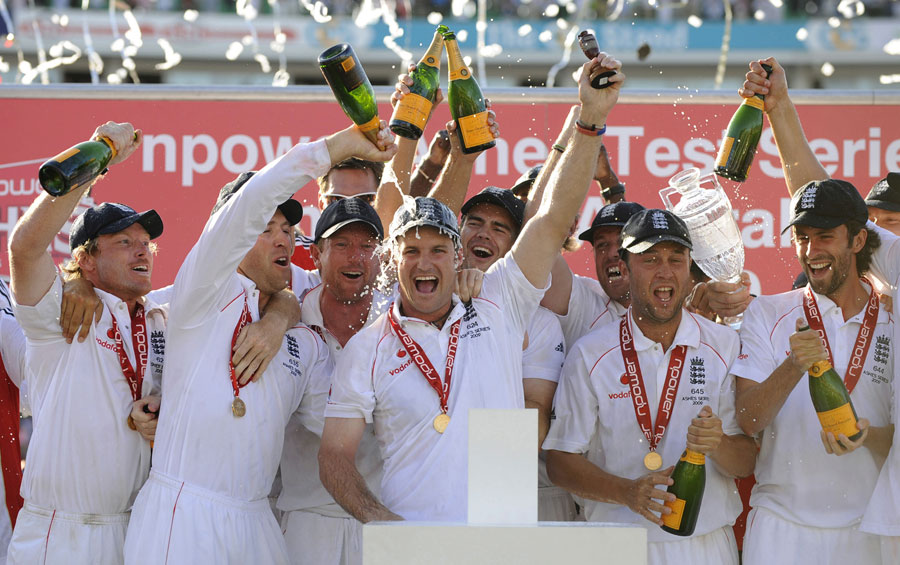 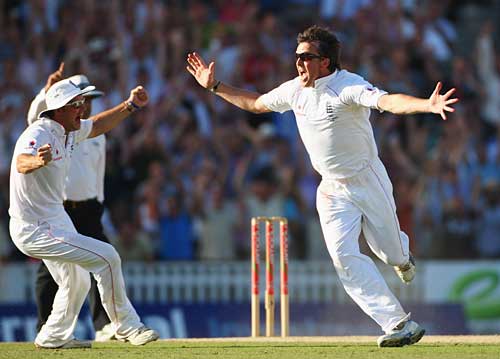