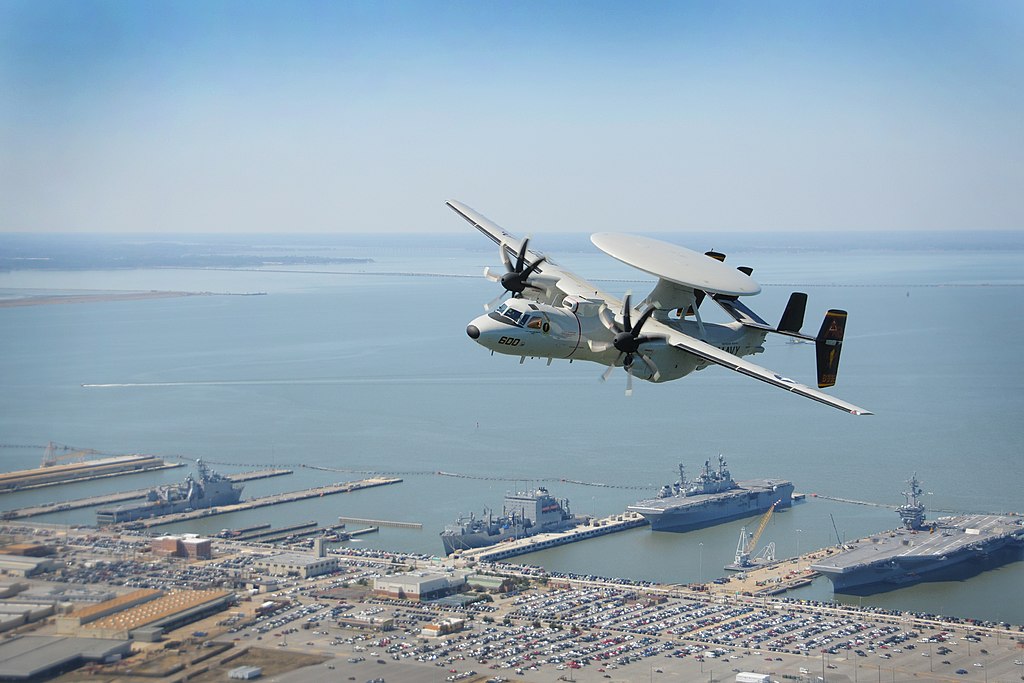 The E-2D’s Lockheed Martin AN/APY-9 UHF-band radar is the central feature of the Advanced Hawkeye. Both friend and foe alike have touted UHF radars as an effective countermeasure to stealth technology. One early public example of that is a paper prepared by Arend Westra that appeared in the National Defense University’s Joint Forces Quarterly academic journal in the fourth-quarter issue of 2009. “It is the physics of longer wavelength and resonance that enables VHF and UHF radar to detect stealth aircraft,” Westra wrote in his article, titled “Radar vs. Stealth.”

UHF-band radars operate at frequencies between 300MHz and 1GHz, which results in wavelengths that are between ten centimeters and one meter long. Typically, due to the physical characteristics of fighter-sized stealth aircraft, they must be optimized to defeat higher frequencies in the Ka, Ku, X, C and parts of the S-bands.

There is a resonance effect that occurs when a feature on an aircraft—such as a tail-fin tip—is less than eight times the size of a particular frequency wavelength. That omnidirectional resonance effect produces a “step change” in an aircraft’s radar cross-section. Effectively, what that means is that small stealth aircraft that do not have the size or weight allowances for two feet or more of radar absorbent material coatings on every surface are forced to make trades as to which frequency bands they are optimized for.

That would include aircraft like the Chengdu J-20, Shenyang J-31, Sukhoi Su-57 PAK-FA and, indeed, the United States’ own Lockheed Martin F-22 Raptor and tri-service F-35 Joint Strike Fighter. Only very large stealth aircraft without protruding empennage surfaces—like the Northrop Grumman B-2 Spirit or the forthcoming Long Range Strike Bomber—can meet the requirement for geometrical optics regime scattering. Effectively, that means the E-2D’s AN/APY-9 radar can see stealth aircraft like the J-20 or J-31.

Pentagon and industry officials concede that low-frequency radars operating in the VHF and UHF bands can detect and even track low-observable aircraft—that’s just physics. But conventional wisdom has always held that such systems cannot generate a “weapons-quality” track—or in other words, are unable to guide a missile onto a target. “Poor resolution in angle and range . . . has historically prevented these radars from providing accurate targeting and fire control,” Westra wrote.

However, electronic scanning and new signal processing techniques have mitigated those shortcomings to an extent. And there are other techniques in development, such as linking multiple low-frequency radars via high-speed data links, which might enable those radars to generate weapons-quality tracks. But industry officials say those technologies are not ready for prime time.

Yet it is possible that the U.S. Navy and Lockheed may have already solved the problem. The service openly talks about the E-2D’s role as the central node of itsNIFC-CA battle network to defeat enemy air and missile threats. Under the NIFC-CA “From the Air” (FTA) construct, the APY-9 radar would act as a sensor to cue Raytheon AIM-120 AMRAAM air-to-air missiles for Boeing F/A-18E/F Super Hornets fighters via the Link-16 data link.

Moreover, the APY-9 would also act as a sensor to guide Raytheon Standard SM-6 missiles launched from Aegis cruisers and destroyers against targets located beyond the ships’ SPY-1 radars’ horizon via the Cooperative Engagement Capability data link under the NIFC-CA “From the Sea” (FTS) construct. In fact, the navy has demonstrated live-fire NIFC-CA missile shots using the E-2D’s radar to guide SM-6 missiles against over-the-horizon shots—which by definition means the APY-9 is generating a weapons quality track.

All of that means that the E-2D—paired with F/A-18E/Fs, F-35Cs or an Aegis cruiser—is the perfect weapon to defeat enemy stealth fighters like the J-20 or J-31. Thus, extending the E-2D mission radius and time of station just helps the Advanced Hawkeye become an even more effective weapon. 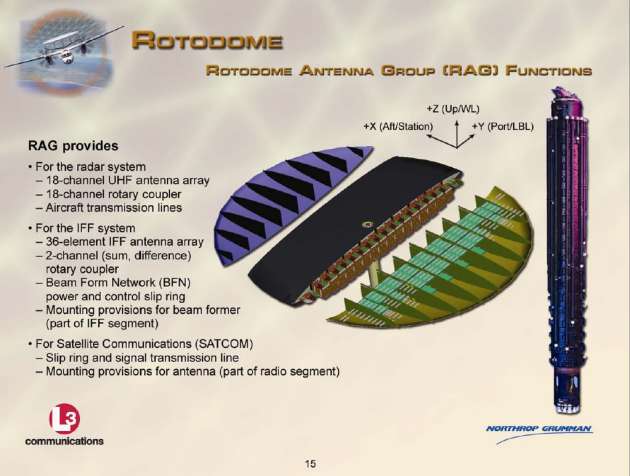 The hybrid design approach for the E-2D radar perhaps typifies how Northrop matched the technology available at contract signing in 2002 and the needs of the mission.

Although mechanically scanned arrays are growing obsolete, technology does not yet exist for a UHF-band (300MHz to 1GHz) electronically scanned array (UESA) to fit within the size and weight limits aboard the Hawkeye airframe. At the time Northrop launched the programme, it was reported that a UESA system would require 27 transmit modules to achieve 360e_SDgr coverage.

Northrop has installed a combination of radar systems in a variable speed rotodome. There is a mechanically scanned L-3 Communications Randtron ADS-18 antenna that sweeps in 360e_SDgr for all radio frequency emissions. In addition, the 18-channel Lockheed Martin APY-9 electronically scanned array scans for airborne objects across an arc up to 90e_SDgr wide.

The rotodome is designed to spin at three different speeds, completing a full revolution either every 10s, 12s or 15s. The crew also has the option to stop the rotodome. This allows the radar to focus all the energy provided by the E-2D's twin 170kVa generators, which can each surge to 225kVa for up to 3h, into a targeted area. Concentrating the beam allows the radar to either find smaller targets closer-in, or pick up larger targets at far greater ranges.

It is this unique combination of mechanical and electronic scanning that allows the E-2D to more than double the range of the previous APS-145 radar on the E-2C. Neither Northrop nor navy officials disclose the range of the APY-9, but it is listed as beyond 300nm (555km) and appears only constrained by the distance to the horizon at the E-2D's mission altitude of 25,000ft.

"As you increase the power, [radar] clutter goes up as much as targets," says Culmo, adding the overland mission is a particular challenge. "If you don't do something to cancel the clutter better, you get nothing from increasing the [radar system's] power."

Unfortunately for China, even before it could field its alleged 5th gen fighters the USN can already defeat it. And soon Japan will start receiving its own E-2Ds.

Northrop Grumman and Lockheed Martin appear to have overcome the traditional limitations of UHF-band radars in the APY-9 by applying a combination of advanced electronic scanning capability together with enormous digital computing power in the form of space/time adaptive processing.

The Navy would not directly address the issue, but service officials did say the APY-9 provides a massive increase in performance over the E-2C Hawkeye 2000’s radar.
Click to expand...

The APY-9 is a unique design in many respects, NAVAIR and Northrop brag that the radar is a “two-generation leap” over the APS-145 in an information booklet the service has been distributing. While externally the radar appears to be no different than the purely mechanically-scanned AN/APS-145—also built by Lockheed Martin–internally it is an another matter entirely.

While the APY-9 does rotate inside the E-2D’s dish-shaped radome to achieve 360-degree coverage, the crew of the aircraft can control the antenna rotation speed to focus on an area of interest according to NAVAIR. Further, the 18-channel passive phased-array ADS-18 antenna has the ability to steer its radar beam electronically. It also incorporates an electronically-scanned identification friend or foe system.

Advanced Airborne Early Warning Surveillance is the normal operating mode for the radar to provide uniform 360-degree, simultaneous air and surface coverage with long-range detection of low radar cross-section targets. The antenna rotates 360 degrees every ten seconds or so when it is operating in this primarily mechanically scanned mode.

The Enhanced Sector Scan mode merges traditional mechanical scanning with steerable electronic scanning to leverage the benefits of both technologies while simultaneously mitigating the shortcomings of either methodology. The antenna rotates mechanically, but the operator can select a specific sector where the rotation of the antenna is slowed to focus on an area.

Enhanced Tracking Sector is a pure electronically scanned mode, where the antenna is geographically stabilized or following a particular target. This mode provides enhanced detection and tracking in a selected sector by stopping the antenna and scanning purely electronically. This mode is particularly useful against low-observable targets due to its rapid track updates.

Completed in early October from the US airframer's facility in St Augustine, Florida, the milestone was announced by the company on 15 November.

It initially ordered a solitary example, doubling its commitment in August 2016. Both aircraft are scheduled to be handed over next year.

https://www.flightglobal.com/news/articles/northrop-flies-first-e-2d-for-japan-443415/
You must log in or register to reply here.
Similar threads
INDIA TO UPGRADE DEFENCE ALONG LAC; IN ADVANCED STAGE OF TALKS WITH US FOR PROCUREMENT OF MQ-9B DRONES
China delivers largest, most advanced warship to Pakistan
How Did India Manage to Build an Advanced Fighter Jet Like the Tejas?
AVIC Advanced Heavy Lifter/AC332
Share:
Facebook Twitter Reddit WhatsApp Link