Cheran said:
Most of the headlines fail to mention as to who the attackers are. Coincidence, i think not.
Click to expand...


ezsasa said:
adding a few more paradigms, will keep adding to it as and when situation presents itself.
========
It will be a non issue unless some BJP minister gets named.


That's the editorial line on India of all MSM in india and across the world.
Click to expand...

Perversely Hindus should have been rioting for this blasphemy.

Look at the map below, as you can observe the concentration of Hindus and Buddhists is mostly at the border areas of Bangladesh. 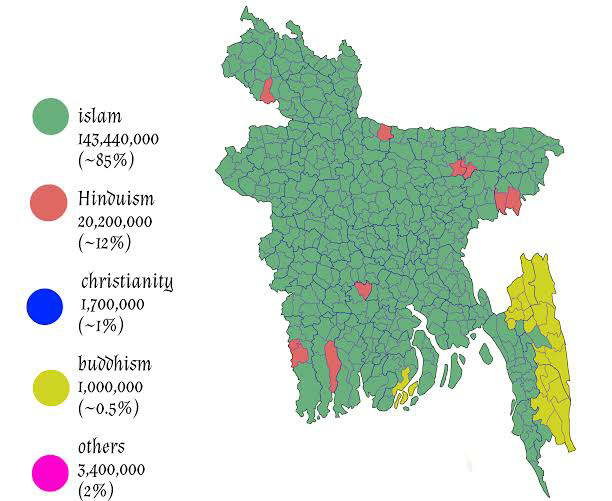 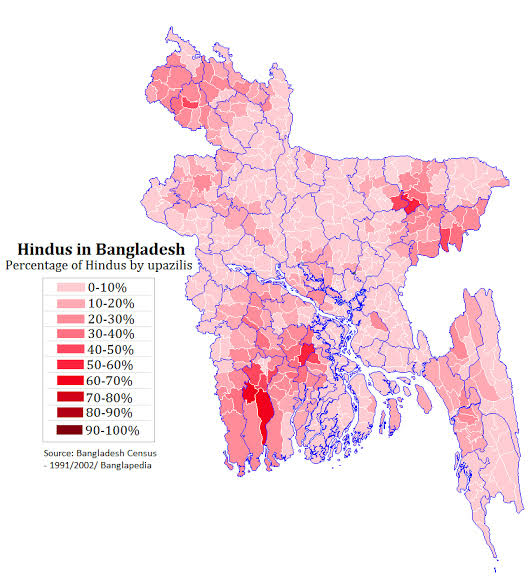 * These Bangladeshi Hindus are destined to take refuge in India if these atrocities against them continues.
* Bangladesh is a very big trading partner of India and it is very important for India to not let it become another Pakistan. it can hurt India both financially and politically.

So the only solution for India to prevent Bangladesh from becoming another Pakistan and reducing the influx of refugees is-
* to somehow motivate the Hindus of Bangladesh to start settling in bordering upazillas, where they are alreay in massive numbers.
* Indian government and companies should start Investing in only those areas where Hindu population is high in Bangladesh.
* It will make the Hindu community more strong and their demands will have to be addressed if a political party wants their votes (similar to Muzzis in India)
* It will also act as a buffer around India's chicken's neck

Instead of Running from Bangladesh, the Bangladeshi Hindus may learn a thing or two from the Indian Muzzis and start acting smartly.
* The Hindu Marriage Law of Bangladesh allows Hindu men to marry as many woman they want (though I am strictly against it), the Hindus should start reverse LJ and start increasing their population.
* They should regroup and settle around border areas and beat the fuck out of the mn22!s living there, and build Hindu only colonies
* Eent ka Jawab Patthar se do
Last edited: Oct 20, 2021

Very true. Fact is the the hatred the Rakibools have for India may not be that crystal clear to others, but to us Bengalis who have the misfortune to speak and read the same language as the Rakibools, FACEBOOK of all things is a readymade eyeopener about the vicious hatred the sundry Bangladeshis have for India. Facebook automatic suggestions often brings up the venom spitting maulanas' speeches about India.

These groups are pretty much in the same intellectual level as Porkies. But, they are very very popular groups among the lungi-groups.

The way my understanding of defence goes, Bangladesh will never be in a position to challenge India militarily given how it would die an immediate death. The 1971 war would remain as a lesson for even the most stupid military commander BD would ever have. But, there have always been a good ISI presence in BD and given how cozy BD has gotten with Chinkies, I wouldn't be surprised the funding for recent troubles in NE is being routed through Dhaka. In fact, Bangladesh Rifles or BDR, the BD counterpart of BSF is one of the most radicalized groups which even mutinied and tried to assassinate Hasina and actually killed quite a lot of top BD Army officers. So, it is no wonder that the illegal infiltrators pass through the BD side of the borders as water passes through a sieve.

Thing is BD is the challenge for future and its burgeoning economy, BD may become a small powerhouse economically and that gives it the freedom of upgrading its warfighting capabilities. In fact, it is quite attractive for investors shifting production from BD as it has a semi dictatorial mode of democracy. So, India should be weary of the growth of BD, if for nothing but due to its hugely radicalized population. Also, Hasina isn't going to be there forever.

So that the voice of victims can be supressed.

jackprince said:
Thing is BD is the challenge for future and its burgeoning economy, BD may become a small powerhouse economically and that gives it the freedom of upgrading its warfighting capabilities.
Click to expand...

BD will probably fall into a middle income trap due to low diversification, so they won't challenge India economically. Instead BSF should keep these raqibools contained in the sewer and prevent destruction of WB.
You must log in or register to reply here.
Similar threads
Memories, nostalgia: What Durga Puja means to a NR Bengali
Weapon Worship during Durga Puja
Durga Puja festivities in Bangladesh
Bangladeshi Hindus celebrate Durga puja
Share:
Facebook Twitter Reddit WhatsApp Link