DTTI: First signs good but India to wait and watch on defence ties with US

Lockheed Martin's Squad Mission Support System (SMSS): An autonomous vehicle serving alongside soldiers in rough terrain with a half a ton of equipment on its back will change the rules of the battlefield - India can look forward to procuring such advanced systems from the U.S.

IN HIS testimony to the US Senate during his confirmation earlier this month, new American Defense Secretary General James Mattis highlighted the centrality of the India-US Defense Technology and Trade Initiative (DTTI) to ties between the two countries. Because of the DTTI, General Mattis said, the bilateral defense relationship “has grown to the benefit of both countries”. But, notwithstanding General Mattis’s optimism about the initiative, it has shown some progress on only two projects so far.
The DTTI mechanism was launched in 2012. It was a brainchild of then US deputy secretary of defense, Ashton Carter.
It progressed when Carter took over as the US defense secretary, and the first four projects under the DTTI were announced during President Barack Obama’s visit to New Delhi as chief guest for the 2015 Republic Day celebrations. India and the US are currently working on six projects under the DTTI framework and two more American proposals are under the consideration of the Defense Ministry. 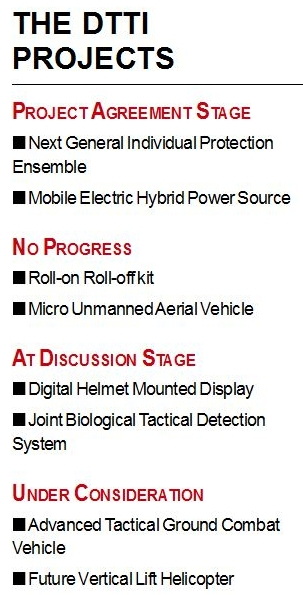 “The whole idea of the DTTI was to cut through the government bureaucracies on the two sides. As a mechanism for defense cooperation, it has to focus on advanced technologies. Fifty per cent of the original projects have reached project agreement stage, two are in a limbo, and we are hopeful of progress on the rest,” an official dealing with the DTTI framework told The Indian Express.
The two projects in a limbo, the Roll-on Roll-off Kit and the Micro Unmanned Aerial Vehicle, have not progressed at all. Sources said these two projects are industry-focused and defense companies have not shown adequate interest in them. They will thus “need to be explored further”.
The Next General Individual Protection Ensemble and Mobile Electric Hybrid Power Source projects reached the agreement stage in 2015.
DRDO and US Labs are the lead agencies from the two countries for these projects. Scientists from the two agencies discuss the progress on a monthly basis via telephonic conferences besides meeting twice a year, sources said.
The Digital Helmet Mounted Display and Joint Biological Tactical Detection System projects were proposed last year and are currently “at a discussion stage”. Besides these six joint projects, India and the US formed five joint working groups in addition to the original two working groups under the DTTI.
Among the two American proposals under the consideration of the Defense Ministry is an offer to include Israel for joint development and production of Advanced Tactical Ground Combat Vehicle (ATGCV). The US offer for trilateral cooperation on the futuristic military platform was made last November but official sources said that they are yet to make up their mind on it. The Defense Ministry is likely to convey its decision to the Americans at the next DTTI meeting in March or April, which is scheduled to be hosted at the Pentagon.
“The ATGCV project potentially goes way beyond the Futuristic Infantry Combat Vehicle (FICV) which we are developing indigenously here in India. The Americans feel that three advanced countries can bring their advantage of expertise and economy to the project which, if successful, could then be used by the armies of all the three countries,” officials told The Indian Express.
The American side also proposed bilateral development of Future Vertical Lift Helicopter (FVLH) in November under the DTTI. An announcement on the project is expected at the next DTTI meeting.
Besides these new projects, the Pentagon had proposed to the Defense Ministry that the two sides work on a deal for an American combat fighter aircraft, whether F-16 or F-18, under the DTTI. This proposal was made at the DTTI Inter-Agency Task Force meeting early last year. But the Defense Ministry did not want the fighter aircrafts to be considered under the DTTI. Defense Minister Manohar Parrikar recently said that the government would chose a single-engine foreign fighter, the American F-16 or the Swedish Gripen, under Make in India to supplement the 36 Rafale fighters in the medium-weight category. The decision, Parrikar said, will only be made after a Strategic Partnership model, to identify an exclusive private defense company for manufacturing the aircraft in India, has been made by his ministry.
Donald Trump’s victory in the US Presidential polls had left the Indian side concerned about the state of the DTTI because it was seen as Carter’s personal project. These concerns were addressed with the passage of the National Defense Authorization Act of 2017 (NDAA 2017) by the US government last month, in which Section 1292 on ‘Enhancing Defense and Security Cooperation with India’ institutionalized the DTTI mechanism.
Despite General Mattis’s statement now that “the US-India (defense) relationship has been strengthened in recent years”, New Delhi remains unsure about the priority the Trump administration may give to defense cooperation. By all accounts, New Delhi will adopt “a wait and watch attitude”.
http://www.indiandefensenews.in/2017/01/dtti-first-signs-good-but-india-to-wait.html

There are no indications to say that DTTI has ever taken off beyond discussions, because all the products on offer are coming from "american school of warfare".Even the mini-drone did not take off because of the cost .The two agreed upon products mentioned in the article are Helmet mounted display and Joint Biological Tactical Detection System, first one is being manufactured right here in india now a days and second one is basically a fabric with inbuilt sensors. interestingly for the fabric i had found a American DoD tender for their private industry to develop the fabric just a month or so before they announced in under DTTI, so there is no question of co-development, i remember posting in some thread at that time. None of the items are based on our future requirements.