The only possible reason is IAF allegedly saw the KF21 flight and decided to speed up the AMCA with existing technology like IRST, DAS etc. So they will induct before 2030 and attach the EOTS in further iteration.

But this is IAF we don't do that here.

This is SSLV's 4th stage aka VTM(Velocity Trimming Module), 2m dia....as all of you knew it can launch multiple satellites into multiple orbits....Now I'm just guessing that our Agni-V and K-series mizziles' PBVs will also be almost similar to this 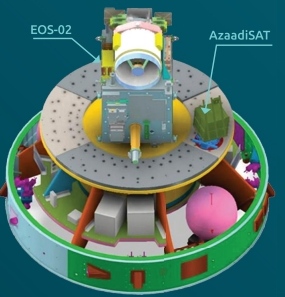 Arjun Mk1A said:
The only possible reason is IAF allegedly saw the KF21 flight and decided to speed up the AMCA with existing technology like IRST, DAS etc. So they will induct before 2030 and attach the EOTS in further iteration.

But this is IAF we don't do that here.
Click to expand...

You'd be surprised. The forces are not what they were pre 2017. Things have changed drastically.
J

Sorry bro
I didn't understand forces are not like pre 2017 with respect to what ?

It would be nice if you could elaborate a bit more on this for us forum members here.

It would be good contribution for everyone to stay updated on this topic.

If they seriously setting up multiple AMCA squadron before 2030. Then it is a paradigm shift in IAF

I remember seeing 2 irst on amca one near nose and another one below
So it will have 2 irst ?

Chinmoy said:
21:22 second. Pilot says AIM-54 goes almost vertical and you took it for granted. There is something called feeling and real world physics. Could you point me an instance in the interview where he mentioned firing at an negative or zero degree angle and the missile shoots up to 80,000 feet?
Service ceiling of a F-14 is 53,000 feet. Just imagine a missile which you would fire at 0 degree and after travelling few feet it would turn 90 degree and climb 27,000 feet. Hope you could figure out how it would look like. Moreover if it could vertically climb to 80,000 feet, why have they launched it at an angle to attain the service ceiling during ALSM test? It could have vertically climbed upto 80,000 feet. Right?

Site doesn't allow me to upload the whole paper on Missile flight parameters and guidance law for A2A and A2G launch. But these are some snippets.

On Astra Mk3, DRDO should have mentioned the range to be 340 km instead of 190 km. Because if missiles start flying vertically up to its service ceiling, then no matter from what altitude it is launched, it would travel to 65000 feet and travel 340 km. They should have left alone the launch altitude here.

More importantly, they should have leave behind the AOA also in their display.

I got it that no matter how much technical paper or snippets I present, you are a hard believer that every missile is launched in a plane axis and it shoots up to its maximum altitude.

Exactly in a previous para I had quoted a text which says the missile climbs up immediately after launch so that it can cruise in the rarefied atmosphere of 80000 ft and then comes down on its target just before the terminal phase.

It has been mentioned in several sources and videos.

What, you are now coming to semantics? Which part of the missile climbs up to 80-100000 ft don't you understand ?

The missile doesn't goes 90 degree and shoots straight up. It doesn't take a rocket scientist to comprehend this because the whole point of climbing to the ceiling of 100000 ft is to make the missile fly longer at the same thrust level due to the lesser skin drag from the rarefied air.

Why would the missile waste precious energy and climb straight up 90 degree . In that way it isn't covering any horizontal distance , and the whole point of this exercise is to make the missile fly longer. So such a move would defeat its entire purpose. The RIO was over ecstatic and that's why he said almost vertical.

You are being deliberately obtuse just to prove that you aren't wrong. That doesn't mean it changes the facts on the ground.

The only technical paper you have presented is for an experimental launch of an AIM-54 from a F-15 for a study on hypersonics. THATS WHAT YOU HAVE DONE.

Watch from 1:43 onwards. That's how the Phoenix or any missile climbs towards its ceiling.

Also notice the horizontal launch and not a high alpha launch.

Don't give me the same bullshit that what are the planes of reference? Was the photographing aircraft in the same plane as the launch aircraft or was it horizontal? Don't try to hide behind such sophistication when you know you are plain wrong.


Tell me was the aircraft photographing Tejas in this case in the same plane as the Tejas launching the missile?
Is this launch with the nose level ?
Or is it a high alpha launch just because according to you we don't know or see the frames of reference????


SHOW ME A SINGLE VIDEO WHERE DURING A TEST LAUNCH OR A WEAPONS TRIAL, A BVRAAM WAS LAUNCHED WITH THE NOSE HIGH UP.

YOU CANT. Coz there isn't any. In my years of playing and studying in DCS, haven't ever seen someone going high alpha to launch a bvraam. Equating a single experimental case with regular launches won't do.

YOUR INFLATED SENSE OF EGO WONT ALLOW YOU TO ADMIT THAT YOU ARE WRONG.

You are the only person in the entire world who is completely ignorant of how a Phoenix and some other bvraam works . Ask anybody on this or on other forum.


And I will again mention it. ASTRA mk3 has a 300+KM RANGE AND THE MISSILE INDEED CLIMBS TO HIGHER ALTITUDE AFTER LAUNCH FOR V LONG RANGE SHOTS.
Last edited: Aug 7, 2022

The underwater robot of CoratiaTech monitors, inspects & determines the wave speed, direction and location of any kind of weakness in structures of dams, bridges, and ports .

GoI said that HAL has responded to the tender. As usual media made a mountain out of a mole
J