@patriots , remember what we discussed?
C

flanker99 said:
werent 12 cleared recently or is this from an earlier order?

BEL officials say that 30 units of the earlier variant of WLR are already with the Army and based on its performance across the Line of Control (LoC), a lighter weight version was requested by the Army.

Same one. It was cleared by DAC and order has been placed now.

Chinmoy said:
Same one. It was cleared by DAC and order has been placed now.
Click to expand...

But without ccs approval
How come?

Today, VLSRSAM was successfully tested against a sea skimming fast target. The missile was launched from an Indian Navy ship.

Arihant Roy said:
Today, VLSRSAM was successfully tested against a sea skimming fast target. The missile was launched from an Indian Navy ship.

ezsasa said:
VEM has a A2G rocket/missile in their product portifolio, don't think it has been prototyped or tested yet.

IAF/IA hardly have any A2G missiles other than helina & SANT, isn't it?
Click to expand...

Actually I should not have written its ready, report only says it’s under tests (what ever that means) - the news was more about VEM opening a new manufacturing facility. They have been showing various missile mock-ups fro a few years now, but no info on trials etc.

So additional air defence missiles coming for Vizag and Kolkata class destroyers to complement the 32 expensive long range barak 8? Or they will be installed on only newer ships?

pipebomb said:
Thanks for replying, i found it informative.Firstly you might have misunderstood me, i am not saying whether A system should have x range or y. Its about trying to understand why comparable system has varying range, whether it is for some technical advancement or marketing sorcery. A quick correction, i was comparing mpatgm to spike lr2 & mmpt which are claimed to be generation ahead of spike lr or javelin.
Regarding brimstone ii, it became clear to me from discussion on this thread that its range is comparable to sant i.e 20km, whether its same size of sant or not is not clear. 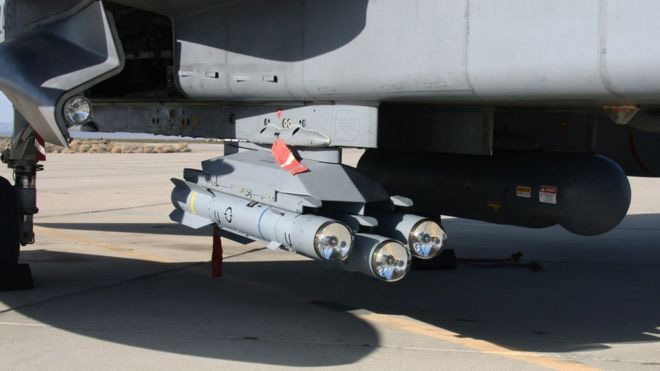 The Brimstone missile family is comprised of fixed-wing-, rotary-, and surface launched missiles developed and deployed by the United Kingdom.

Speaking of sant, how does it acquire target, do we need an mmw targeting radar for it.
Click to expand...

Not necessarily, SANT missile works in 2 ways, lobl and loal mode with guidance method being mmw seeker. In LOBL mode, mmw simply locks onto the target and homes into it, lock is obtained through slaving of seeker to EO pod, radar SAR or a mmw radar. While in LOAL mode you simply feed coordinates of target to INS of missile, missile flies to the target area, activates seeker to search in certain area zone, locks on to target and do its thing, INS feed is through EO or radar data.
There are 2 things I am not sure about:-
1) How does mmw seeker differentiate between let's say 2 tanks standing next to each other in LOAL mode as the data is not imagery but some radar return, so lch may designate target on left in LOAL mode but the missile may hit the right side target.
2) How does a pilot choose to retarget SANT when the received data is not an imagery but some radar return plot and hence targeting pop up targets based on priority is a problem.

However, SANT will be more reliable in acquiring armored targets in any kind of weather, even in sandstorms than the HELINA.

IMO, usage of SANT can be like a brimstone for IAF fighter fleet, if IAF is serious on providing close air support to Army to effectively take out armored targets from standoff distance even from low altitude outside short range air defense systems. Not many short range systems have range above 20-30km mark. Radar SAR & GMTI mode would be great for targeting.

Usage on current Heli is restricted to the capabilities oF EO pod. But the full capability of SANT can only be utilised by a MMW radar on heli which can search, classify and designate targets upto ranges of 10-20km. This will literally mean death to any armored formation
Army has a requirement for Heli FCR, but HVT from Hal said they have no plans for that, don't know if he is wrong. Two contradictions, so there is a chance that there may be a mmw radar in work or atleast planned for future.
.
C

India Super Power said:
But without ccs approval
How come?
Click to expand...

First of all we have to understand the composition of DAC and CCS. Then we could understand which projects would go for CCS approval and which could be passed without CCS approval.

Composition of DAC is as:

Composition of CCS is as:

Now the difference here is, CCS committee consists of FM along with MEA. They do play an important role in capital acquisition. Let's say we are planning an A/C. DAC would give AON based on inputs from Chiefs of staffs. But the cost of making one is a multi billion affair. One year Naval budget is not going to cover the building cost of it. So after that it would move to FM for budgetary allocation. The moment it would move to FM, it would come under CCS. On top of that, any project where foreign OEM is involved in design, development or supply would come under CCS approval.

Any procurement above 300 crore comes under DAC approval. Now in this case of Swathi Mk2, budgetary allocation is right under what has been allocated for IA. Moreover there is no foreign OEM involvement in development or manufacturing of it. Another point is, its not an LTPP like an A/C. So DAC approval is enough for it.
K

Enyone know if this can be quad packed in a Brahmos tube ? 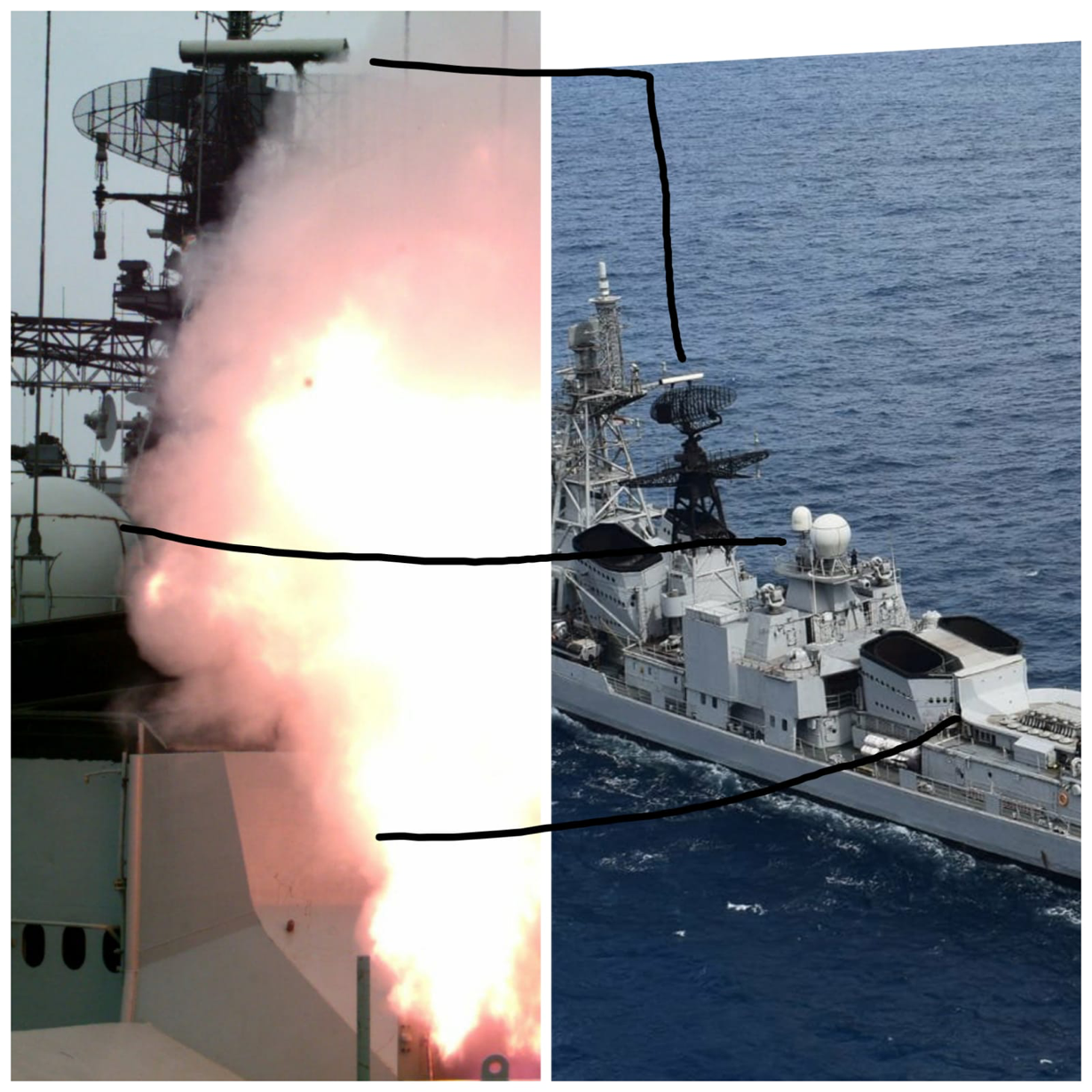 Today’s VLSRSAM launch was from a Rajput Class Destroyer.

Is it a decommissioned ship?? because,what happened to the Brahmose launcher on the same position or it is from a Brahmose canister?
C

Photon said:
Is it a decommissioned ship?? because,what happened to the Brahmose launcher on the same position or it is from a Brahmose canister?
Click to expand...

If its from Rajput class, it does have an inclined launcher for Brahmos. The most logical place from where VL-SRSAM would be launched is from S-125M launcher.

Chinmoy said:
If its from Rajput class, it does have an inclined launcher for Brahmos. The most logical place from where VL-SRSAM would be launched is from S-125M launcher.
Click to expand...

No S-125 is not launched from canister they are dual arm on-deck launcher and at least two rajput has Brahmose vertical launcher in the same position, inclined one not present in all

Chinmoy said:
If its from Rajput class, it does have an inclined launcher for Brahmos. The most logical place from where VL-SRSAM would be launched is from S-125M launcher.
Click to expand...

Does rajput class have vls
C

Photon said:
No S-125 is not launched from canister they are dual arm on-deck launcher and at least two rajput has vertical launcher in the same position, inclined one not present in all
Click to expand...

Where it has been mentioned that VL-SRSAM was launched from a cannister?
C

Chinmoy said:
Where it has been mentioned that VL-SRSAM was launched from a cannister?
Click to expand...