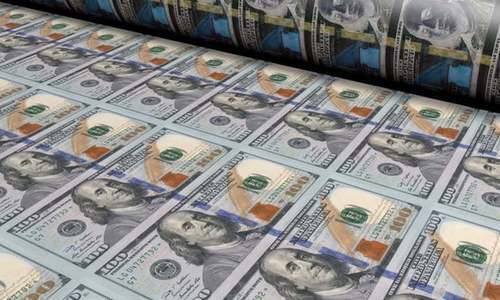 Currency dealers fear the alarming increase will fan panic in the market for dollars, causing a buying frenzy for the US dollar. — Photo/File

The value of the dollar shot up by as much as Rs11.70 in the interbank market during trading on Tuesday before closing at Rs133.64.

It had closed the previous day at Rs124.27 to the dollar a day earlier.

The State Bank of Pakistan (SBP) explained the move as reflective of current account dynamics and a demand-supply gap in the foreign exchange market.

"Although the current account deficit narrowed in August 2018, a consistent increase in the oil import bill on account of rising international oil prices has exerted pressure in the foreign exchange market," the central bank said in a statement.


"The SBP is of the view that this adjustment in the exchange rate along with lagged impact of recent hikes in the policy rate and other policy measures to contain imports will correct the imbalances in the external account," it continued.

The SBP will continue to closely monitor the situation and stand ready to intervene in case of any unwarranted volatility in the foreign exchange market," it concluded.

The dollar has been on an appreciating trend, reaching Rs124.30 in the interbank market on Oct 5, with rates in the open market reaching Rs127.80 on Saturday.

The interbank rate today rested at Rs124 as the market opened, rose to Rs138, then dipped to Rs133.

For the past few days, the open market rate of the US dollar has been Rs4-5 higher than the interbank rate. The open market rate is Rs134 to Rs135 today, according to General Exchange Companies Association of Pakistan Secretary Zafar Paracha.

Currency dealers fear the alarming increase will fan panic in the market for dollars, causing a buying frenzy for the US dollar.

Take a look: Road to Washington

They speculate that the sudden increase in the price of the USD could be a result of rupee devaluation — the fifth time since Dec 2017 — by the State Bank of Pakistan (SBP) in order to secure a bailout packagefrom the International Monetary Fund (IMF). The Fund has demanded the government devalue the rupee by at least 15 per cent.

"The central bank has given an indication to let the rupee go with market forces," a broker was quoted as saying by Reuters. The rupee is widely believed to be under a managed float. However, with the pressure that the currency is facing, observers had predicted further devaluation as they said it would be hard for the SBP to defend it for much longer.

Saad Hashmi, research director for brokerage Topline Securities had said last week: “Given the foreign exchange reserves at the SBP, I don’t think the bank has enough fire power to bring the rate down.”

He added that he expects “a slight devaluation at this point, and then eventually a 135-140 level in the next eight to 12 months”.

Bankers and experts have said that the rupee value in the currency market was already reflective of its true position, suggesting that there was no need for the government to further devalue the local currency.

Zafar Paracha had earlier warned that an immediate devaluation could result in market disequilibrium similar to earlier instances when banks were offering high price of dollars and open market trading was much below the official rates.

Forex Association President Malik Bostan advised the government to be cautious. "It shouldn't devalue the currency so much that it robs people of their purchasing power," he said.

"They [government] are going to the IMF now and they have devalued the currency on the Fund's demand. I think the government has shot itself in the foot."

Not all believe that reaching out to the Fund for help is alarming. Suleman Maniya, head of research at Shajar Capital told Reuters that it was a "positive rather than a negative thing" as it would assure stakeholders that the government would meet the targets that it sets for itself. The shortage of foreign reserves, though, is cause for concern, according to Reuters.

The state bank’s foreign reserves were down to $9 billion in the week ending Sept 19, enough to cover just two months' worth of imports, down some $300 million from the previous week, according to SBP data.

Though the Finance Ministry has not clarified how much money the country needs in foreign reserves, Finance Minister Asad Umar has said that Pakistan has to make external debt payments amounting to $8bn by December this year.

Pakistan’s economy has been wobbly for months amid speculation that Prime Minister Imran Khan's new government would request the country’s 13th IMF bailout since the late 1980s.

A formal announcement in this regard was made yesterday, with the government confirming that it would approach the IMF for balance-of-payments support and enter into a stabilisation programme.

Market analyst Muzammil Aslam, while speaking to DawnNewsTV said that once Pakistan would receive funds from the IMF, the economy would stabilise.

"I don't think it will go up to Rs150, the government won't allow the economy to spin out of control," he added.

Senior Pakistan Tehreek-i-Insaf (PTI) leader Ali Zaidi said that the jump in the exchange rate would "affect everyone, even us ministers".

"But just bear with it for a while and everything will fall into place," he said
You must log in or register to reply here.
Similar threads
China warned to prepare for being cut off from US dollar payment system
India to spend 130 billion dollars for military modernization in next 5-7 years
India, Japan Sign 75 Billion Dollar Currency Swap Agreement
Iran just dumped Petro-Dollar. Euro to be the new currency to trade in
Share:
Facebook Twitter Reddit WhatsApp Link