400lb bomb left at Policing Board 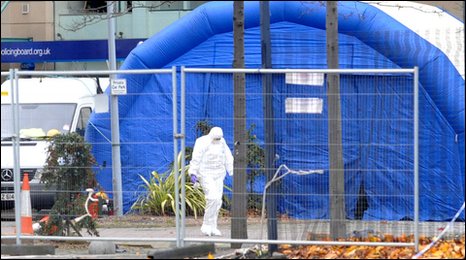 
Dissident republicans have been blamed for leaving a car containing a 400lb bomb outside the Policing Board's headquarters in Belfast.

The device in the car, which had been driven through a barrier by two men who then ran off, partially exploded at about 1900 GMT on Saturday.

Dissident republicans are also thought to have been behind this attack.

Officers returned fire during the incident on Saturday night. There were no reports of injuries.

It is understood the attack in Garrison was an attempt to kill a police officer who lived in the village.

It does not appear that the officer was at home at the time of the attack.

Three of those arrested were detained by the PSNI, while the Irish police arrested a third man in Dooard, Rossinver, in County Leitrim on Saturday night.

He is currently detained under Section 30 of the Offences Against the State Act.

"Very clearly these people are trying to undermine the progress that has been made in Northern Ireland in recent years," he said.

"When attacks like these happen it brings people together with the strong message that these dissidents will not succeed."

PSNI Chief Constable Matt Baggott said the car bomb was a substantial device which could have caused significant damage and reckless loss of life.

He said: "None of this will deter us from the delivery of excellent good policing to all people and communities in Northern Ireland and we are determined to bring those people responsible to justice."

Earlier this month, the Independent Monitoring Commission (IMC) reported that the dissident republican threat in Northern Ireland was at its highest level for almost six years.

The IMC said the two main dissident republican groups, the Real IRA and the Continuity IRA, were working more closely together to increase the threat posed to security forces.

On 7 March, the Real IRA killed sappers Mark Quinsey, 23, and Patrick Azimkar, 21, at Massereene Army base in Antrim.

In the period covered by the report, 1 March until 31 August, there have been 11 attempts to kill other PSNI officers in Northern Ireland.