A day after The Indian Express reported on the entry on the Pakistan Army website about the "martyrdom" in Delhi of an ISI agent on a "Suicide Attack" operation, top sources in the capital's Sir Ganga Ram Hospital confirmed that the death did indeed occur.

The ISI operative, Naik Zulfiqar Ahmed of the HQ 30 Corps, was referred to the hospital by the Pakistan High Commission, which also paid his medical bills, the sources said.

He was admitted in the hospital's nephrology department on November 1, 2007, and died "after fifteen days, most probably from kidney-related problems", a source said. No foul play was suspected, he added.

According to information put up on the Pakistan Army website's Shuhada's (Martyrs') Corner, Ahmed, from Bhimber in PoK, died on November 16, 2007 at "Ganga Ram Hosp N/Delhi". The "Cause of Shahadat" was "Neptrrotic Syndrome/ARI" (a reference to nephrotic syndrome and acute respiratory infection).

Ads by Google
Sir Ganga Ram Hospital is empanelled with the Pakistan High Commission, and "Zulfiqar came as one of the beneficiaries," said a hospital source. It is not clear who claimed the body, or whether last rites were performed in India.

When contacted by The Indian Express, Shah Zaman Khan, Minister (Press) at the Pakistan High Commission, said they were ascertaining all facts. "I am to get information on the issue," Khan said.

Too bad this rat did not die from a bullet of the IA.

Oracle said:
Too bad this rat did not die from a bullet of the IA.
Click to expand...

or get run over by blue line bus.

even though he is soldier, still if he is on suicide mission (during peace time) then he deserve the comments said by the members, more so keeping in mind his background, which make is prima suspect (explosive expert) for the blasts taking place in India prior to his death.
Last edited: Dec 15, 2010

The "Cause of Shahadat" was "Neptrrotic Syndrome/ARI" (a reference to nephrotic syndrome and acute respiratory infection)
Click to expand...

Shahadat due to fuckin neptrrotic syndrome,poor swinelet would have wanted go to the shahada list in a better than that.Is it shahadat to die of a disease,will he be received in 'jannat' with his quota of houris.How come the Pak high commission referred him to the hospital,was he part of the high commission staff.

The report and the ID says he is from ENGG,
Why he is wearing a green beret? ( INFANTRY )

Kunal may be ISI wears green beret................he is from Det Gen ISI, further more if you look closely his uniform does not have any markings, this is from the official website of PA. (which goes on to show he is from ISI)

That prick came for a suicide mission, then he fell sick, so instead of killing Indians, his kidney killed him, ASAT!

It is strange that our Police has not made any investigation into this. I think he would have been price catch second only to Kasab if we had him before his death.

You're right Saya. Had we caught him before his Jah-an-noon journey, and put him through some of our rituals like electric shock directly to his [email protected], that surely would have been a prize of it's kind.

It has been two days since Pakistani army has withdrawn the page where in the PA's ISI engineer was shown as martyr in India, in absence of any explanation for past two days from PA (including cyber attack), it is prima facie evident that this is true incident, which goes on to show that PA is using its regular soldiers to conduct suicide missions inside India, through its Intelligence agency ISI. It is also pertinent to mention that Spying is crime in International law. This is proof undeniable from the PA itself that it has spread terrorists (through its regular soldier) inside the State of India.

Pakistan soldier who died in Delhi: from Mandeep Singh Bajwa An uproar has broken out in India over the discovery of the profile and details of a Naik (Corporal) of the Engineers in the Shuhada (Martyrs) section of the official Pakistan Army website. The operation he was apparently involved in is described as 'Suicide Attack' and the place of death is disclosed as New Delhi, India.

This has led to charges that the Pakistan Army admits that it sends suicide bombers into India to target innocent civilians as well as vital installations. A little investigation reveals that the NCO was admitted by the Pakistan High Commission in New Delhi to the Sir Ganga Ram Hospital where he died of renal failure. Zulfikar Ahmed was apparently seconded to the ISI (which the website entry reveals) and posted to its New Delhi Station. I don't think the ISI would take the risk of allowing one of its regular, serving personnel to be personally involved in a suicide attack except in a supporting role. After all any post-attack investigation could've revealed his true identity leading to grave embarrassment for Pakistan. Most probably he was involved in either making bombs, suicide vests or as an instructor in bomb-making to the many surrogate Pakistani terror outfits operating in India. This much can be deduced from his background as an NCO from the Engineers. All countries have intelligence personnel posted under diplomatic cover in their missions abroad.

This is probably the first time that a country has admitted that it posts saboteurs, suicide bombers or bomb-making instructors in one of its embassies. What this episode reveals is the malevolence with which the ISI and the Pakistan Army conducts its long-standing operations against the Indian State. Immediately after the story broke in the Indian media, the Pakistan Army website was off the Net apparently for technical reasons. It came back up after a few hours with the names of all 25 ISI personnel earlier listed as martyrs omitted. ISPR and GHQ have not responded as yet to any query on the controversy. Coupled with the earlier incident where hoax WikiLeaks cables were apparently posted on the Internet by what is alleged to be an ISI propaganda front, this incident has caused a great deal of embarrassment for Pakistan's civilian Government. The military of course couldn't care less.
Click to expand...

Hehe terrorists Paki Army,after embarrassing themselves they remove the link.


But I found the screenshot of Paki army website which confirm ISI agent killed in Delhi hospital on a suicide mission. 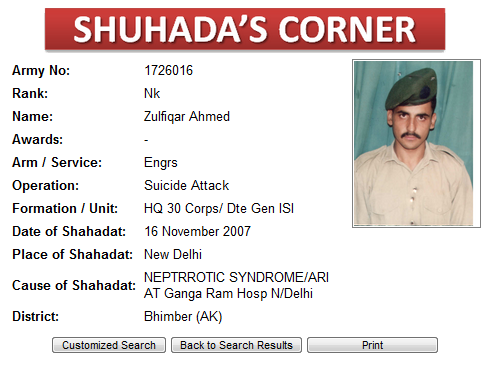 
But I found the screenshot of Paki army website which confirm ISI agent killed in Delhi hospital on a suicide mission.

shameful but expected behavior
You must log in or register to reply here.
Similar threads
Moving the capital from New Delhi to Hyderabad
Journalist giving classified information to Chinese intelligence held along with Chinese woman: Delhi Police
Delhi air pollution: Why what worked for China does not work in India
NIA busts IS-inspired terror module, 10 held in Delhi, UP
Share:
Facebook Twitter Reddit WhatsApp Link