The plan has been sent back for pruning, because it would double India’s defence budget. Top Navy officials meet new minister Sitharaman to brief her.

An elaborate plan drawn up by the Indian Navy to acquire new warships, aircraft, submarines and special equipment over the next five years has met with disapproval from the defence ministry. Officials have termed it ‘unrealistic’, given projected national growth and spending power.

The five-year plan, which was submitted earlier this year by Navy HQ to the defence ministry, would have ended up more than doubling the Indian defence budget for capital acquisition, which currently stands at Rs 86,529 crore.

Sources told ThePrint that the plan – which includes acquisition of new aircraft carrier-borne fighter jets – is unlikely to be cleared in the current form, as it would put a great burden on the exchequer, and would leave little money for the Army and the Air Force, which too have major acquisition projects coming up. This is why the Navy has been asked to alter the plan

India presently spends 12.2 per cent of its annual budget on the defence forces, excluding a pension bill that has increased rapidly after the implementation of the One Rank One Pension policy. In the current financial year, the pension bill has, in fact, surpassed money allocated for capital acquisitions of the armed forces.

Another plan, to build a new aircraft carrier named Vishal, has also been moved again. This plan had been nixed by previous defence minister Manohar Parrikar last year, because it had been deemed too expensive. The project is estimated to cost a whopping Rs 1.35 lakh crore at the approval stage, a projection that is likely to go up with time.

India already has a joint working group with the US for this aircraft carrier, and the Navy wants to try its luck with the new minister.

Besides this, the Navy plans to acquire 57 new fighter jets for operation on the existing INS Vikramaditya aircraft carrier, and the INS Vikrant, which is currently under construction in Kochi.

They need to double the acquisition budget. China isn't sitting on its hands.

Armand2REP said:
They need to double the acquisition budget. China isn't sitting on its hands.
Click to expand...

Armand2REP said:
They need to double the acquisition budget. China isn't sitting on its hands.
Click to expand...

sure , like the boss going to double the salary overnight...
posible ?

Do we need another aircraft carrier, as we have 1 under construction and 1 commissioned?

VIP said:
Do we need another aircraft carrier, as we have 1 under construction and 1 commissioned?
Click to expand...

The sanctioned strength is 3, so when the third indigenous is built Gorshkov will be on its way out. That way a carrier will always be under construction guaranteeing jobs and skills are maintained.
S

Nuclear submarine manufacturing might be cheaper but overhauling them in every six months is very expensive, Each refit could cost a billion ..

Indian carriers are mid size and not super carrier, they are cheaper to maintain, Navy need to make its priority straight, As long as India has andamans chains, India needs carrier force to commit a multi-prong counter offensive against PLAN in times of War ..

Vishal does not need to be a super carrier ..

what we need mine sweepers and submarines ...another carrier wont make any change even we try to launch 3rd one it would take another 5to8 yrs we are not china to have that much construction speed ...we need to make very gud updated surface fleet along with descent amount of submarine force ..not carriers....


the reason am against carrier one it expensive to operate second India not a world police and we never make far out patrolling in sc or in pacific , two careers will be enough for next 10yr but after that we need to up the carrier fleet ,career its not the first priority its submarines and mine sweepers ...

Oh boy. The CNS does not look happy. (Love that pic on the wall though.) 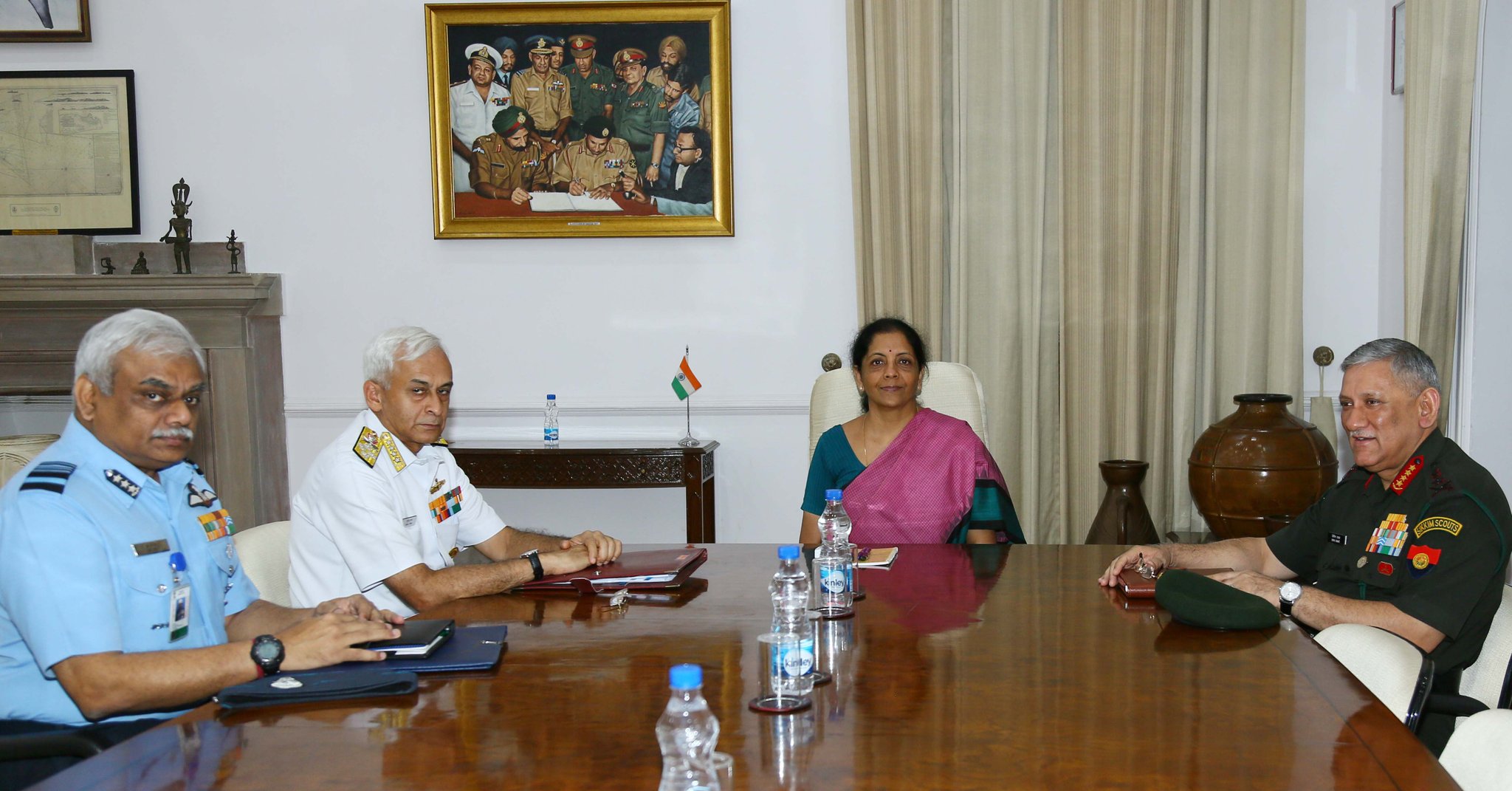 ^Pic is from one of those "daily defence meetings with RM to sort out acquisition issues".


Armand2REP said:
The sanctioned strength is 3, so when the third indigenous is built Gorshkov will be on its way out. That way a carrier will always be under construction guaranteeing jobs and skills are maintained.
Click to expand...

IMHO its best to ice Vishal and build a serious submarine force and a formidable defence base in Andaman and Nicobar first. Once we have an yearly acquisition budget of ~$60 billion in 2030, we might be able to think of a large carrier. Or better yet, three large carriers. By then, we might have our own ship-borne AESA radar and a Naval AMCA to adorn a CATOBAR flight-deck. Naval nuclear reactors would have developed further. Newer tech might be on the horizon, allowing the architects to cater for it in the design phase of the carrier. When we already have a Naval Air Station at Car Nicobar, why not place ASW aircraft and a squadron of fighters there to establish control of 6 degree channel?
Frankly, with 4 new helicopter carriers coming, and two aircraft carriers ready, we better start thinking about the sub-surface fleet. Its either SSN + P-75I + more scorpenes (hopefully) or one big fat carrier that might not be ready till 2030 and that might not have an indigenous carrier wing.

Can this be used to create an Indian equivalent of the MF-STAR? Can the cooling issues be sorted out? BTW, is this just a transmitter or a transmitter-receiver?

US is lobbying hard for pushing EMALs and F-18s - good that current def min is not a sellout.

We need non-nuclear subs - lots of them and fast attack torpedo and missile boats. China will be dealt with asymmetrically.
T

Kay said:
US is lobbying hard for pushing EMALs and F-18s - good that current def min is not a sellout.
Click to expand...

The US Lobby might be doing it, but the Trumpster wants catapults back on his own carriers.

I agree with rest of your post. But we can't stop building aircraft carrier. If we wait till 2030 we will loose both skills , experience and skilled manpower in AC building.

We must build a sister ship for vikrant till 2030. It will not me much expensive , will provide logistical ease with vikrant and will preserve building expertise till 2030. Then we can embark on new technologies.