As stated many times before, GoI has announced the formation of DSA which is now commanded by Rear Admiral Mohit Gupta 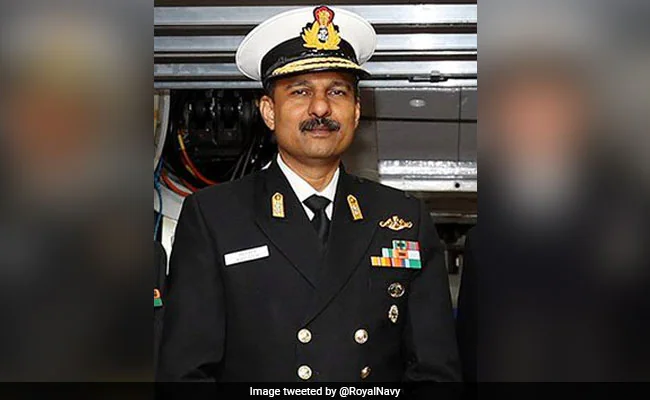 Let's start a discussion about what are you guys expecting from it.

The Defence Cyber Agency (DCA) is a tri-service command of the Indian Armed Forces. Headquartered in New Delhi, the agency is tasked with handling cyber security threats. The DCA draws personnel from all three branches of the Armed Forces. It reports to the Chief of Defence Staff (CDS) through the Integrated Defence Staff (IDS).

Indian Navy Rear Admiral Mohit Gupta was appointed in May 2019 as the first head of the DCA. The DCA is expected to be operational by November 2019. As of 2021, DCA is fully operational with Army, Air Force and Navy established their respective Cyber Emergency Response

The Naresh Chandra Task Force was set up in July 2011 by National Security Advisor Shivshankar Menon to review the recommendations of the Kargil Review Committee, assess the implementation progress and further suggest new reforms related to national security.[5][6] The task force was led by Naresh Chandra, retired Indian Administrative Service officer, and comprised 13 other members, including Gopalaswami Parthasarathy, Air Chief Marshal Srinivasapuram Krishnaswamy (Retd), Admiral Arun Prakash (Retd), Lt Gen V. R. Raghavan (Retd), Anil Kakodkar, K C Verma and V K Duggal. The committee conducted the first holistic review of national security since the Kargil Review Committee and submitted its classified report to Prime Minister Manmohan Singh on 23 May 2012.[7] Among its recommendations, the Task Force recommended the creation of a cyber command (DCA), an aerospace command and a special operations command. All three units were proposed to be tri-service commands in order to bring the various special forces units of the military under a unified command and control structure.[8][9]

The creation of the Defence Cyber Agency (DCA), the Defence Space Agency (DSA), and the Armed Forces Special Operations Division (AFSOD) were approved by Prime Minister Narendra Modi during the Combined Commanders' Conference at Jodhpur Air Force Station on 28 September 2018. The existing Defence Information Assurance and Research Agency will be upgraded to form the new Defence Cyber Agency.

Area of responsibility (ALLEGED)
The Week reported that the DCA would have the capability to hack into networks, mount surveillance operations, lay honeypot, recover deleted data from hard drives and cellphones, break into encrypted communication channels, and perform other complex objectives. According to Lieutenant General Deependra Singh Hooda, the DCA will have the responsibility of framing a long-term policy for the security of military networks, which includes eliminating the use of foreign hardware and software in the Indian Armed Forces, and preparing a Cyberwarfare doctrine.

Since a joint military department is just renamed as DSA, and retasked for "cyber operations". I don't see any change in work ethics tho... until they actively hire youth that are working in this sector.

Mind you cyber operations is not budget friendly at all. We will need hi-tech equipment for it's operation
A

Would its scope be limited to only Cyber Attack and Defense or would it also cover Digital and Electronic warfare ( attack; protection; Support)?

Also does the DSA have any research and development environment?

Arkanoid said:
Would its scope be limited to only Cyber Attack and Defense or would it also cover Digital and Electronic warfare ( attack; protection; Support)?

Also does the DSA have any research and development environment?

The existing Defence Information Assurance and Research Agency will be upgraded to form the new Defence Cyber Agency.

Since a joint military department is just renamed as DSA, and retasked for "cyber operations". I don't see any change in work ethics tho... until they actively hire youth that are working in this sector.
Click to expand...

What I always wanted was a dedicated national Information Sharing Platform.

A dedicated network where information is shared Between various agencies.
Information network will have different level of encryption based on the the sensitivity of information.

Bhumihar said:
What I always wanted was a dedicated national Information Sharing Platform.

A dedicated network where information is shared Between various agencies.
Information network will have different level of encryption based on the the sensitivity of information.
Click to expand...

Too risky. The more endpoints a network have, the more vulnerable it is. A data is sent to every computer in a network until it finds a correct destination. It's better to have small small networks with info shared physically or only through secured tunnel...

Bhumihar said:
What I always wanted was a dedicated national Information Sharing Platform.

A dedicated network where information is shared Between various agencies.
Information network will have different level of encryption based on the the sensitivity of information.
Click to expand...

Obviously encryption info will not be publicly available.

Apparently meitY(ministry of electronics and information technology) and national center of excellence in
technology for internal security are jointly organising a cyber related programme. at iit bombay

do you guys have more info about it? or is it another stupid cyber awareness blah blah sh!t 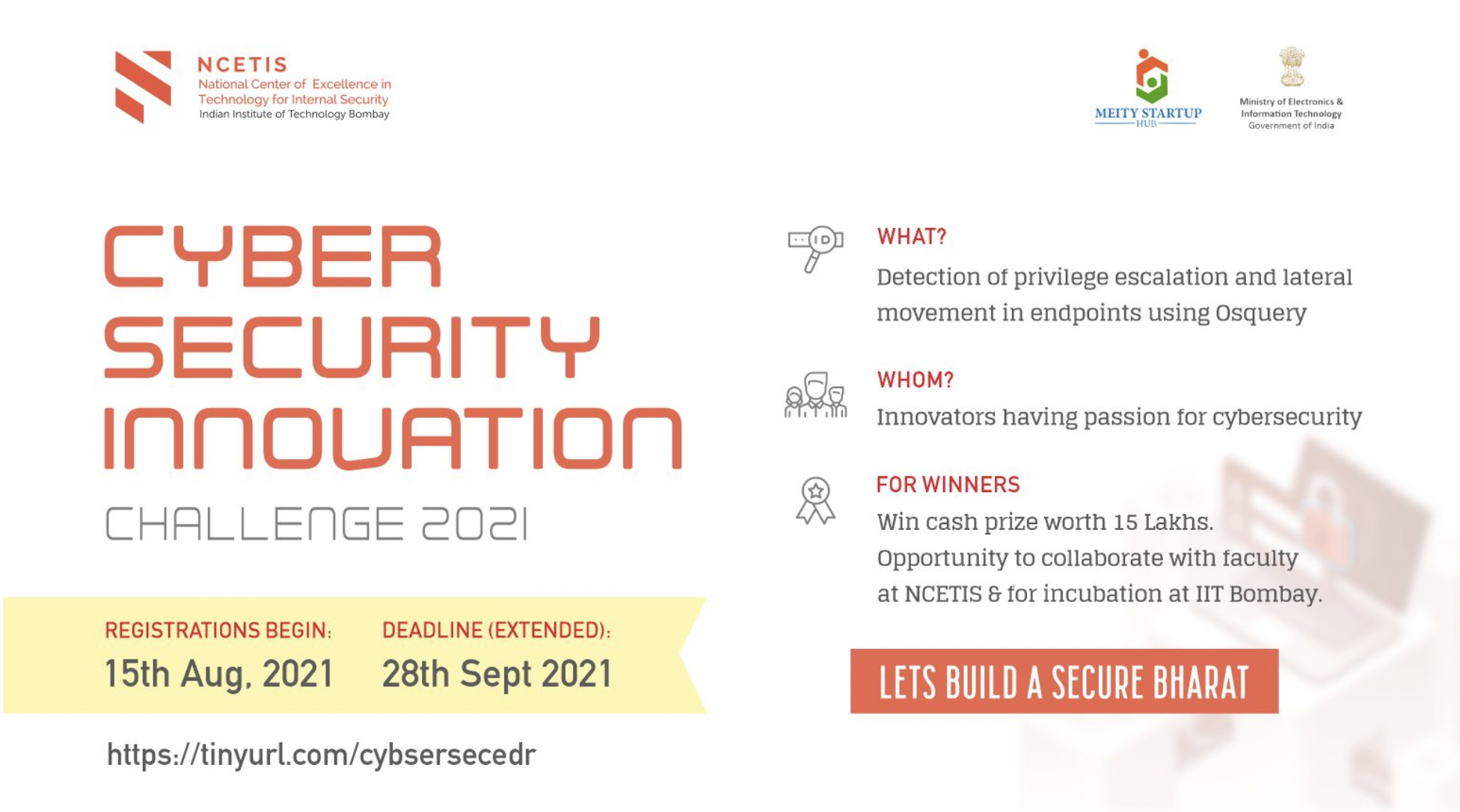 looking at "what" of the challenges. it's looking like a serious challenge. privilege escalation and osquery.

@ezsasa Requesting couple of actions for streamlining threads on cybersecurity.
Requesting merger of the following thread into this one: https://defenceforumindia.com/threads/indian-military-stepping-up-cyber-security.80657/
Also requesting that the following thread be renamed from "Indian Cyber Warfare Capability Discussions and Infosec News" to "Indian Civilian Cybersecurity: Discussions and Infosec news" so that we have two separate threads: This one for Defence Cyber Agency and the other one for Civilian Cybersecurity.
https://defenceforumindia.com/threa...apability-discussions-and-infosec-news.82030/
.


Government has approved establishment of Defence Cyber Agency, under the aegis of Ministry of Defence. This agency is now fully functional. To mitigate cyber threats, all the three Services have established their respective Cyber Emergency Response Teams (CERT). Furthermore, Government of India is formulating the National cyber security strategy, which is in the final stages of approval.

There have been repeated attempts by various cyber threat actors to target our various sectors. However, measures are being taken to detect and deter these threats.

Adequate safeguards have been instituted in the form of Cyber Audits, Physical Checks and Policy Guidelines to ensure a robust cyber posture of armed forces.

This information was given by Raksha Rajya Mantri Shri Ajay Bhatt in a written reply to Shri Shyam Singh Yadav in Lok Sabha today.

This makes it look like the immediate thrust is on Defensive capabilities, rather than offensive ones. Its clear we lag behind. Anyways, whenever we get around to it, what Offensive Cybersecurity capabilities should we be targeting? IT Gurus on this forum please enlighten us.

@Arkanoid brings up an interesting point. In my opinion, Cyberwarfare would be closely connected to Electronic Warfare as well. The Americans are already including Cyber attack capabilities to target Integrated Air Defence Systems (like Indian Air Force's IACCS) into the USAF's Next Generation Jammer. I still don't understand which mechanisms would allow a signal fed by jammer to enemy radar to act as a vector for a cyberattack, but they are already working on it, which means the Chinese are too. Another capability focus, I imagine, would be on developing means to hack SDR networks and get into communications. If they hack the IFF, it would be disastrous. Meanwhile we are still focused on Defence it seems: CERTs, firewalls, penetration testing, network redundancy, security audits, best practice awareness, etc seems to be the focus for now. Whenever we get around to building our Military CyberAttack muscle, which capabilities should we focus on?
Recently on PM's directive, CDS has started working on a new Non-Contact Warfare Doctrine. It entails Information Warfare, Psychological Warfare and Cyberwarfare. Objective is to intimidate adversary through use of non-Contact warfare. Hopefully it details Cyber Attack capabilities the Armed Forces want so that Private Sector, DRDO, C-DAC, etc can start working on those today so that by the time Armed Forces are done forming their Cyber Defences, they have offerings of Cyber Attack systems.
.
That Cyberwarfare is closely linked with Electronic Warfare is clear when we look at PLA's Strategic Support Force (PLASSF). In PLASSF, there is more compartmentalization between tactical and strategic intelligence ops than there is between Cyber and Electronic capabilities. PLA has "Electronic and Network Warfare" groups at Army brigade level and is well integrated into the Operational planning process insomuch that PLA commanders might rely on these capabilities more than they would on Physical attacks. Network warfare is PLA-speak for Cyberwarfare. Their doctrine calls for two different types of Cyber attacks: 1.) Degrade enemy Network, 2.) Concealed attack to affect enemy decision making to make it maneuver its tactical forces into a trap laid by PLA's tactical forces. Even in Brigade level reconnaissance, they have in addition to traditional methods like recce by fire, by attack, etc: Recce by electronic or digital search.
.
PLA's entire doctrine is to avoid enemy's strong points and attack its weak ones. Which may be why they avoided kinetic warfare with India. I don't know how capable their systems are and doctrinally, I do think they are overemphasizing the focus on "breaking enemy morale" and attacking Networks rather than Physically attacking field formations to defeat enemy. And I think that they are doing this because PLA is a more centralized military and it knows that Network warfare and psychological warfare would be very effective against PLA, so it thinks that it would be very effective against enemy Armed Forces as well. They might not understand that it would be more effective on PLA than against Indian Army, for example. Which is exactly why India should cease the initiative and use its traditional strength in the field along with Cyber and Electronic warfare capabilities to achieve maximum efficiency against the PLA.
.
In that respect, the new non-Contact Warfare doctrine is timely and targets the right spot: Intimidating the enemy. Will also allow us to counter Pakistan's proxy warfare to some extent by giving us non-kinetic options for terror attacks smaller than the ones which necessitated our response in Balakote and Uri.
You must log in or register to reply here.
Similar threads
Coming soon: Ministry of Defence’s cyber, space, special operations divisions
Ministry of Defence’s cyber, space, special operations divisions
Australia plans cyber defence against increased hacking
Defence task force to track work on PM’s directives, non-contact warfare doctrine
Share:
Facebook Twitter Reddit WhatsApp Link