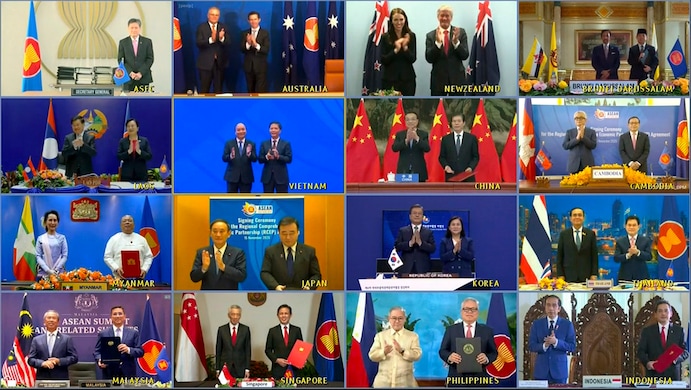 There were no fireworks or fanfare to mark the occasion, but in addition to being the start of a new year, Jan. 1, 2022, marked Day One of a new economic and geopolitical reality in East Asia. It figures to be advantageous for China and unfavorable for the United States — and, to make matters worse, this outcome is due largely to this country’s own policy errors, under both former president Donald Trump and President Biden.

At issue is the Regional Comprehensive Economic Partnership, or RCEP, a new trade agreement that 15 countries — including China, Japan, South Korea and Australia — signed Nov. 15, 2020. It took effect for most of them this New Year’s Day. Spearheaded by smaller countries that are grouped in the Association of Southeast Asian Nations, the deal reflected ASEAN members’ interest in greater regional integration, which they hope will defuse long-standing political differences between China on the one hand and democracies such as South Korea and Japan on the other.
The deal covers 2.3 billion people accounting for $25.8 trillion in output, as well as $12.7 trillion in trade, according to the World Bank. It aims to phase out all import tariffs among signatory nations within 20 years and create common rules for intellectual property and e-commerce. And yet its provisions in both of the latter two areas are weak, reflecting China’s preferences; it also lacks labor and environmental standards consistent with what U.S. analysts consider a “high quality” trade agreement. What’s more, RCEP’s tangible economic impact is likely to be incremental rather than transformational: $500 billion in additional world trade, by 2030, according to a Brookings Institution analysis. (Total trade was roughly $19 trillion in 2019, the last pre-pandemic year.)

What cannot be denied is the agreement’s geopolitical significance. Quite simply, this is the sort of thing that happens when the United States abandons the task of shaping economic integration. President Barack Obama had tried to forge a 12-country Trans-Pacific Partnership under U.S. leadership, whose members would have included seven RCEP signatories, plus Canada, Mexico, Chile and Peru — but not China. (South Korea and the United States already have a separate trade promotion accord.) Mr. Obama’s wise goal, which enjoyed bipartisan support, was to foster economic integration on U.S. terms, not China’s.
But Mr. Trump pulled the United States out of the proposed pact and pursued a unilateral trade war against China, renegotiated the U.S.-South Korea deal and imposed selective tariffs on Japan, which were later reduced in return for more access to the Japanese market for agricultural goods. And the Biden administration, bowing to some of the same industries and unions that supported Mr. Trump’s policy, has declined to resurrect the TPP.
RCEP fills this made-in-the-U.S.A. vacuum. It does so on terms that, while not exactly dictated by Beijing, certainly suit China better than the TPP would have. The Biden administration is correctly pursuing a tougher policy against Beijing’s regional aggression, and seeking to rally other Asian countries to its cause. That will be much harder to do on the basis of unilateral economic disarmament.
R

Very difficult to see anything regarding RCEP on MSM and American social medias, wondering why.
R

And almost no report re the bouncing back of Chinese PMI in December.
There are tons of fake news about China from Indian outlet like WION every day.
You must log in or register to reply here.
Similar threads
Economy watch of East Asia
Lecture by Prof. David Reich - "The Genetic History of the Southern Arc: A Bridge between West Asia & Europe"
Discussion | India, Central Asia, Afghanistan, and the future of this region
Genetic Continuity of Indo-Iranian Speakers Since the Iron Age in Southern Central Asia
Share:
Facebook Twitter Reddit WhatsApp Link