Crocodile killed after taking foolish shortcut across a herd of hippos

Oops, they weren't logs after all: The moment a crocodile was killed after taking a foolish shortcut across a herd of hippos​
​
​
​
Their bone-crushing jaws, 24 razor-sharp teeth and armour-plated skin are enough to ensure most animals keep their distance.

But, as our incredible pictures show, even crocodiles are no match for a herd of angry hippos.

This young reptilian predator paid the price for swimming too close to a mother and her calves while they bathed.

As 50 hippos gathered into a defensive circle around them, the crocodile panicked and raced over their backs in a bid to escape. 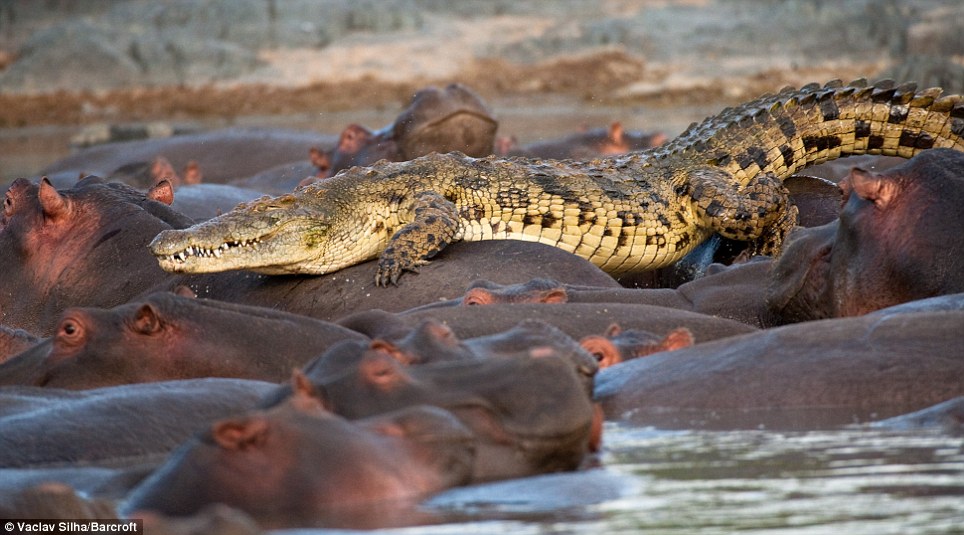 Bold move: The crocodile races across the backs of the hippos in a bid to escape after trying to snare a mother and her calves 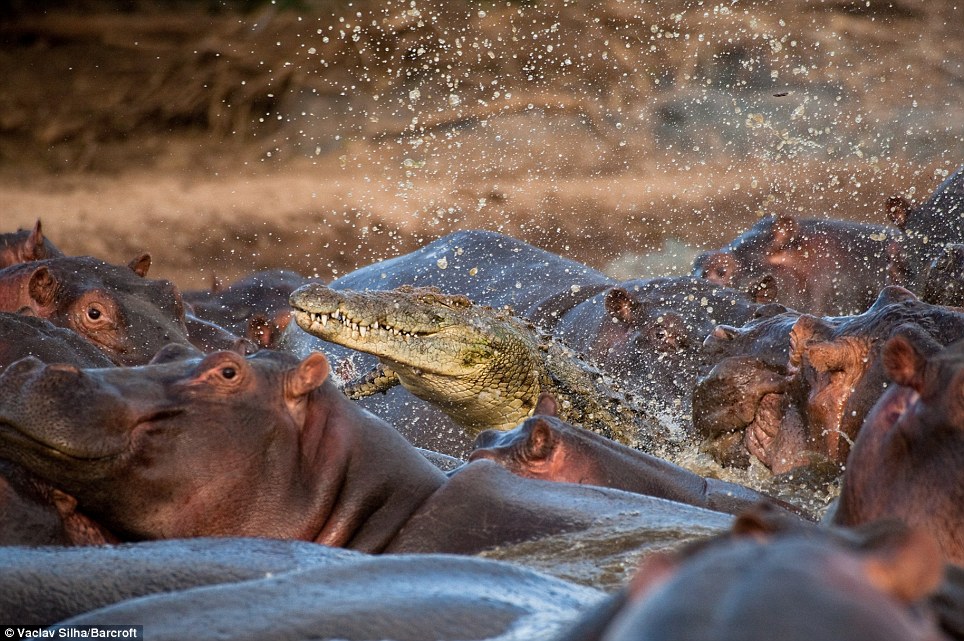 Making a splash: The crocodile writhes and wriggles but cannot escape the clutches of his angry opponents​
It was the last mistake he ever made. The beast’s defences were no match for the maze of angry mammals, who proved their bite is every bit as lethal as his.

The spectacularly rare battle of the beasts was captured by Czech wildlife photographer Vaclav Silha.

He had set up his camera on the banks of the River Nile in the Serengeti national park, Tanzania, when the unbelievable scene unfolded before him.

But the 45-year-old got more than he bargained for when a colossal fight broke out between the group and a sneaky crocodile he had spotted earlier.

‘One of the only reasons you might see a conflict is if the hippos have young and they think the little ones are under threat. That’s exactly what happened here. 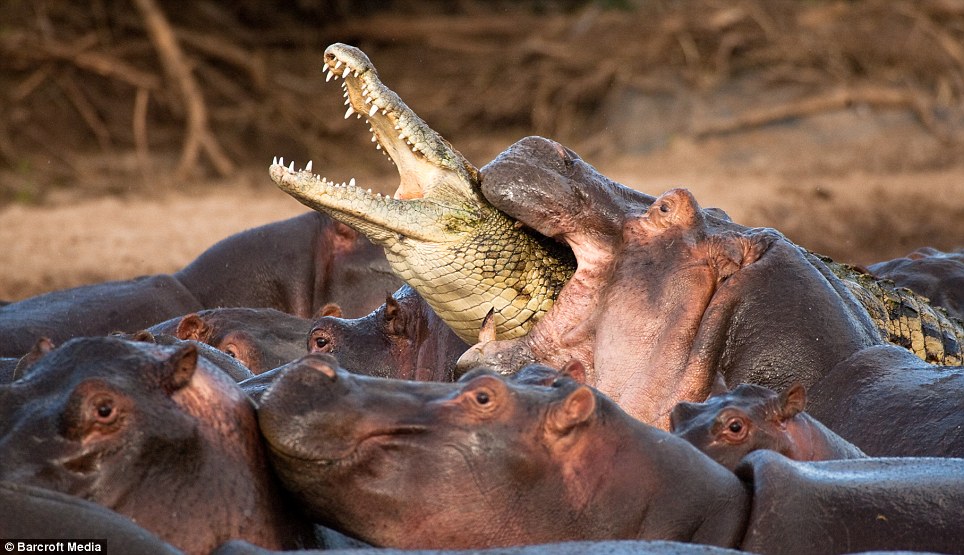 In the jaws of death: The crocodile is defeated by a maze of angry hippos after trying to kill one of their young 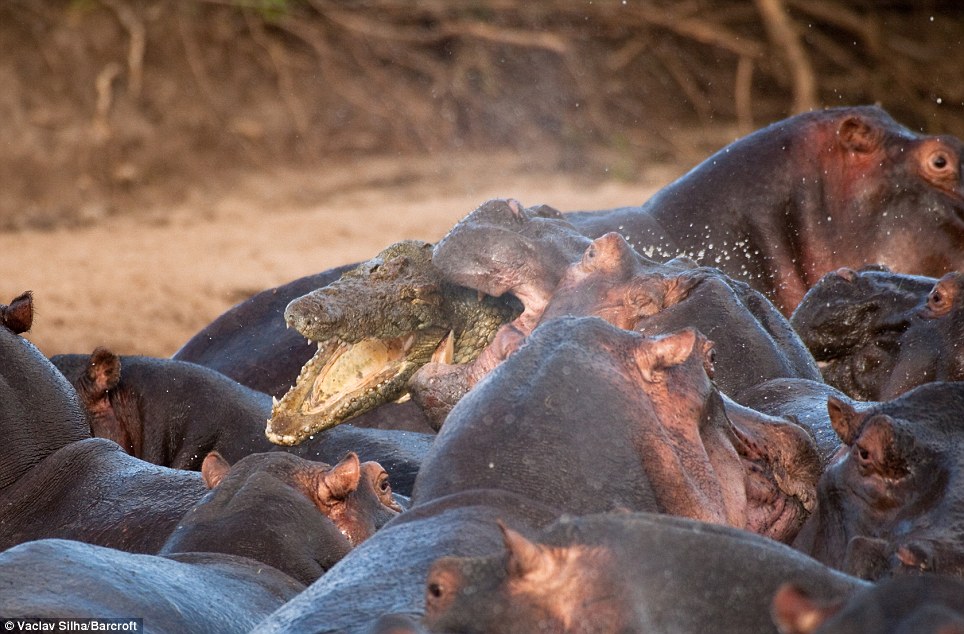 Make it snappy: The raging hippos take revenge by biting back while feeding at the River Nile in Tanzania​
‘The incautious croc got too close to a female who had calves and the whole group gathered into a defensive circle around them. It was a strong message for the crook to clear off.

‘I have absolutely no idea why but the crocodile suddenly raced across the backs of the hippos. I think it might have panicked and thought it was a possible escape route. I couldn’t believe my eyes.

‘It was the worst choice the reptile could ever have made and it was definitely its last.

‘The island of hippos suddenly erupted with teeth and all I could see was the crocodile being repeatedly crushed in their huge mouths.’

Described as one of the most aggressive creatures in the animal kingdom, an adult hippo can apply several tons of pressure in a single bite.

‘Even the toughest crocodile could not have withstood being repeatedly bitten like that,’ said Mr Silha, from Prague.

‘There was no way for him to escape. I few seconds later his lifeless body slipped below the water and I didn’t see him again.’

One of these pictures was originally published in the November issue of BBC Wildlife Magazine. 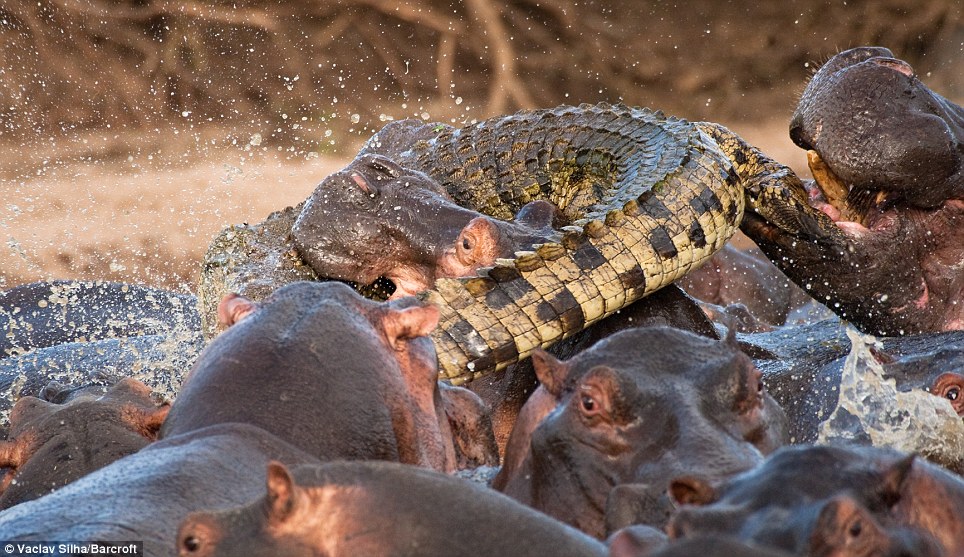 Finish him, boys: The crocodile writhes in its final movements before being finished off by his mammal opponents.​
A

Thats why they say: "Never come between mother and her child", thats the most dangerous place in this universe.

I am not surprised one bit. Hippos and Hyenas are one of the most under-estimated animals in the wild. Any animal expert will tell you that hippos are as dangerous as a croc in and outside water and crocs really dont stand a chance against them.

Here is an Animal Planet simulation of a Hippo vs Bull Shark. Guess who wins

This one's no simulation
YouTube - Jaguar vs Crocodile (Caiman)

This is the Battle at Kruger. This is an amazing battle between a pride of lions and a heard of buffalo. When the lions capture the baby buffalo, they think the battle is over - but really it's just begun..........:twizt:. .

Battle at Kruger is a amateur video which was widely praised for its dramatic depiction of life on the African savannah.

It was also the subject of an article in the June 25, 2007 issue of Time Magazine and was featured in the first episode of ABC News' i-Caught, aired on August 7, 2007. A National Geographic documentary is also planned. Filmed in September 2004 by videographer David Budzinski and photographer Jason Schlosberg at a watering hole in Kruger National Park, South Africa, the video depicts a confrontation between a herd of Cape Buffalo, a small pride of lions, and a pair of crocodiles.
Taken from a vehicle on the opposite side of the watering hole, the video begins with the herd of buffalo approaching the water, unaware of the lions resting nearby. The lions charge and disperse the herd, picking off a young buffalo and knocking it into the water. While trying to drag the buffalo out of the water, it is grabbed by a pair of crocodiles, who fight strenuously for it before giving up and leaving it to the lions. The lions sit down and prepare to eat, but are quickly surrounded by the reorganized buffalo, who move in and start kicking at the lions. After a battle which includes one lion being tossed through the air, the baby buffalo (who is miraculously still alive) escapes into the herd. The emboldened buffalo chase the remainder of the lions away. It is not known if the youngster survived the ordeal.

Two veterinarians and animal behaviorists interviewed by Time assert that the behavior exhibited by the buffalo is not unusual. Dr. Sue McDonnell of the University of Pennsylvania (School of Veterinary Medicine) said of the video:

"The larger herd is broken down into smaller harems, with a dominant male and several females and their babies. If a youngster is threatened, both the harem males and bachelor males - which usually fight with one another - will get together to try to rescue it."