Conjoined orphan twin girls successfully separated after 29-hour operation​
​
​
For the first time in their young lives, orphaned twin sisters joined at the head are lying in individual beds after a incredible 29 hour operation to separate them.

Krishna and Trishna, whose mother died during childbirth in Bangladesh nearly three years ago, were given only a 50 per cent chance of surviving the Melbourne operation without brain damage.

The toddlers have a 25 per cent chance of making it through without any harm at all - and there was also the strong possibility that one or both could die.

But after a team of 16 surgeons, assisted by anaesthetists, nurses and other medical staff had worked around the clock in rotation, the Royal Children's Hospital head of surgery, Mr Leo Donnan, stepped from the operating theatre to announce with a smile: 'They have been successfully separated.' 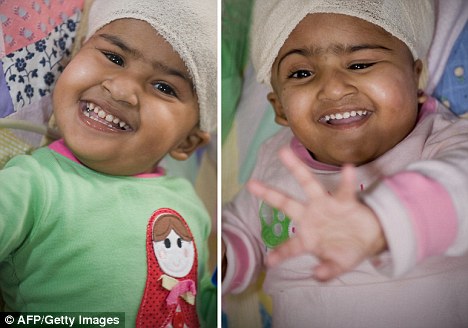 Trishna (L) and Krishna (R), the Bangladeshi set of twins joined at the head before the operation to separate them​
The dangerous operation had taken nearly 13 hours longer than anticipated - including 27 hours to separate the little girls, aged two years and 11 months, and a further two hours of work by plastic surgeons to seal the ensuing holes in their heads.

And although Mr Donnan said there was 'still is a long way to go' with the girls having a 'very difficult time ahead of them,' he said that the way the operation had gone was an historic moment for the hospital and for the twins 'an even more historic moment.'

The twins had come to the attention of a Melbourne-based organisation, Children First Foundation, which arranged for them to be flown to Australia for an operation that could give them a new start in life - if successful.

After weeks of careful planning, studying X-rays and monitoring the children's daily health and behaviour, the medical teams arranged their working hours, fully aware that the task ahead would not be easy. 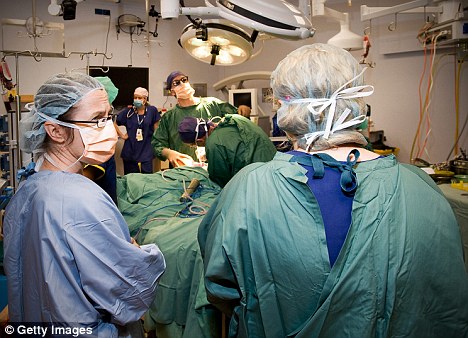 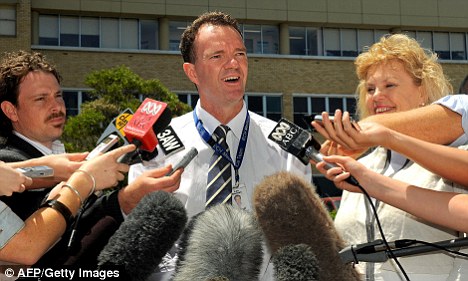 Leo Donnan (C), chief of surgery at Royal Children's Hospital, speaks to the media after Australian doctors successfully separated the twins​
On Monday Krishna and Trishna were anaesthetised and placed faced down on two adjoining operating tables. Plastic surgeons stepped forward to open up the skin and then neurosurgeons carefully opened a small area in the skull.

This 'window' allowed surgeons to insert their instruments to separate the brain tissue and blood vessels at the back of the girls' heads.

Next the twins were carefully lifted and turned over so they were face up, enabling surgeons to complete the separation of the skulls.

Bone had to be severed and connecting tissue separated.

Finally, for the first time, the twins were able to be moved apart and two teams of plastic surgeons set to work sealing the holes in their skulls. 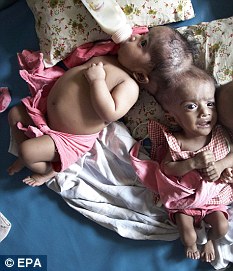 Krishna and Trishna pictured a year after they were born​
'This is a once-in-a-lifetime operation that teams would do,' said Mr Donnan, adding that the mood inside the operating theatre, where every minute was filled with tension, had changed after the separation.

'It's been a very nice stage to move into,' he said.

And there had been concerns, with problems occurring with Krishna's kidney, but when that crisis eased everyone, according to plastic surgeon Tony Holmes, 'was particularly optimistic and excited.'

He explained there had been a great deal of preparatory work before the operation could even begin.

'There's a lot of mucking around at the beginning of an operation like this,' said Mr Holmes.

'It's mainly for positioning and getting all the tubes right so there's no pressure on the eyes, no kinks in the tubes.'

Mr Holmes and another plastic surgeon, Andrew Greensmith stripped back the skin and that allowed neurosurgeons to create a one inch by seven inch window in the skull so that surgeons Wirginia Maixner and Alison Wray could separate blood vessels and brain matter.

Later the plastic surgeons came back to the girls, closing the brain lining and skulls with artificial caps and closing the skin.

The twins are now in intensive care. It will be weeks before it is known if the operation has been 100 per cent successful - but surgeons said they were remaining optimistic
You must log in or register to reply here.
Similar threads
Teenaged orphan allegedly raped by relative for refusing marriage proposal in Islamabad
Duchess of York charged by Turkey over orphans film
twin tail fighter or one tail? (concept)
At least 25 dead, 100 injured in twin explosions in Parachinar, Pakistan
Share:
Facebook Twitter Reddit WhatsApp Link