BRAZIL COULD LICENSE PRODUCE THE PAKFA:- WHO NEXT?

WHEN INDIA AND RUSSIA WERE FIXING THE TERMS AND CONDITIONS FOR THE PAKFA there were various news circulating the involvement of brazil in the project but it didnt turn out that way.
The agreement was signed between the Sukhoi aircraft maker, part of Russia's United Aircraft Corporation (UAC), along with India's Hindustan Aeronautics Limited (HAL), under a preliminary intergovernmental agreement signed in October 2007.
The news circulating about the involvement of brazil stem from the fact that
Russia and Brazil signed a series of agreements on military technology cooperation which emphasize the protection of intellectual property rights and technology secrets during that period.

The agreements will facilitate the transfer of technology and the licensed production of the Russian aircraft in Brazil if Moscow decides to sign a contract with the South American country.
Recently i came across this piece from a senior russian official "We are discussing with the well-known Brazilian company Embraer the transfer of technology and the construction of facilities for the future licensed production of the aircraft, including the fifth-generation fighter,"
said Alexander Fomin, deputy director of the Federal Service on Military-Technical Cooperation.

Now whether this was done with the consent of the indians who is the other partner in the manufacture of the pakfa is still unknown.
or is it a ploy on the part of the russians to win the multi billion tender for the proposed purchase of more than 100 fighters for brazilian armed forces
in which the sukhoi is an important participant with its SU-35 fighter still cannot be clarified.

In my opinion india would be more happy to engage brazil in the overall development of the pakfa project the first prototype of which is to fly sometime end of this year as per the officials.
If the involvement of brazil will be limited to the purchase of the aircraft in the future with full transfer of technology then i seriously think all sales must be within the agreement signed between the two participating countries.we do not want the pakfa technology to be passed to hostile countries in the future after involving such amount of money and effort in the production of the future fighter.

seems the pakfa is making more news and speculation even before it took the skies.


source of the information rian.ru

You hit the nail on the head when you said that we needed to involve more countries. Military technology sharing always goes hand in hand with close economic and political ties. Having Brazil on board with us, would give India a very prestigious standing in world organizations as Brazil is viewed by most as a model country due to their large size and their demographic, not to mention the super models they have manged to produce
Also, having a ally in South America would give our Navy with its blue water ambitions a friendly port to dock in on the other side of the world.

This type of nozzle is used as thrust vectoring<TVC> capable engines. The nozzles are capable of vectoring the thrust up or down to produce an up force or down force.
Some of you who have watched the movie TOP GUN can remember the scene where Navy pilot Pete “Maverick” Mitchell manages to get the upper hand on his instructors by slowing down, pulling up the nose of his F-14 Tomcat, and watching his opponent fly right by. this was the case where you can see the active use of the thrust vectoring capability.Due to the advanced computers and flight control systems, pilots don’t have to think about choosing vectoring or executing specific steps to perform a maneuver. They simply point the airplane where they want, and the onboard systems automatically coordinate the right combination of flaps, rudder, elevator, and nozzle angle, unlike what cruise did in the movie.

The russians were one of the pioneers of thrust vectoring application which was demonstrated by Russian pilot Viktor Pugachev, who with his Sukhoi Su-27 at the 1989 Paris Air Show. The maneuver is not a perfect example of thrust vectoring.Down force will force the aircraft nose to pitch upward while up force has the opposite effect. The two nozzles can also be deflected differentially (one producing up force, the other down force) to provide roll control.the cobra move is also known as the cobra maneuver, also known as Pugachev’s cobra after the name of the pilot.

The indian flanker MKI uses the same 2D vectoring including the F22A and flanker 37 models.The major development which comes up is the use of 3D vectoring with the use of a flap on the nozzle to get multi directional or 360 degrees of trust application. one such aircraft is the MIG-35. A nozzle that deflected thrust left or right would also be considered a 2D nozzle, so long as it was not capable of deflecting up and down as well. However, a nozzle capable of deflecting both up and down as well as right and left is a 3D nozzle.

here is a scheme of such a nozzle. 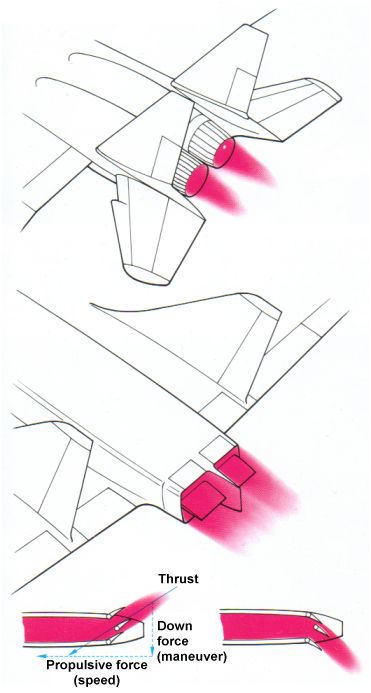 Thrust vectoring when it was first thought of was to make aircrafts for vertical takeoff or short take off or landing ability.but recent developments in its capabilities use it to perform various combat procedures, in the future the direction of thrust can be done using fluid mechanics which is under research and should provide the basis for the development of 6th generation of fighters.


here is a picture of the 3D nozzle in use in the MIG-35
features include :-
1.The only mass-produced axisymmetric omnidirectional nozzle in the world
2.Nozzle control is not restricted in any flight mode, including the afterburning mode

Although it makes economic sense, I would be against transfering sensitive tevhnolog, though I would like India to acquire the same in all fields. Yes Im a hypocrite in that regard, but I would like to see the latest stuff privy to a handful and not all. It doesn't take long to clone these days.
You must log in or register to reply here.
Similar threads
Pakistan-Afghanistan Border Conflict 2022
India’s unreasonable demands in 13th military talks ‘risk new conflict’
India-China 2021 Border conflict
India Pakistan conflict along IB and LoC (July 2021)
Share:
Facebook Twitter Reddit WhatsApp Link