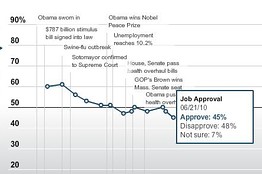 Americans are more pessimistic about the state of the country and less confident in President Barack Obama's leadership than at any point since Mr. Obama entered the White House, according to a new Wall Street Journal/NBC News poll.


The survey also shows grave and growing concerns about the Gulf oil spill, with overwhelming majorities of adults favoring stronger regulation of the oil industry and believing that the spill will affect the nation's economy and environment.

Sixty-two percent of adults in the survey feel the country is on the wrong track, the highest level since before the 2008 election. Just one-third think the economy will get better over the next year, a 7-point drop from a month ago and the low point of Mr. Obama's tenure.


Amid anxiety over the nation's course, support for Mr. Obama and other incumbents is eroding. For the first time, more people disapprove of Mr. Obama's job performance than approve. And 57% of voters would prefer to elect a new person to Congress than re-elect their local representatives, the highest share in 18 years.

The results show "a really ugly mood and an unhappy electorate," said Democratic pollster Peter Hart, who conducts the Journal/NBC poll with GOP pollster Bill McInturff. "The voters, I think, are just looking for change, and that means bad news for incumbents and in particular for the Democrats."

Mr. McInturff said voters' feelings, typically set by June in any election year, are being hardened by frustration over the economy and the oil spill. "It would take an enormous and seismic event to change the drift of these powerful forces before November," he said.

Mr. McInturff added that any "little, faint signs" in the spring that voters were adopting a more optimistic outlook have now been "squished by feelings from this oil spill."

For Democrats, the results underscore the potential for major losses in November. Both parties have been forced to contend with an anti-establishment wave this year. But Republicans, through strong fund raising and candidate recruitment, have put enough seats in play in the House and Senate to give the GOP a realistic shot at winning control of both chambers.

Support for Mr. Obama and his party is declining among centrist, independent voters. But, more ominous for the president, some in his base also are souring, with 17% of Democrats disapproving of Mr. Obama's job performance, the highest level of his presidency.

Approval for Mr. Obama has dropped among Hispanics, too, along with small-town residents, white women and seniors. African-Americans remain the firmest part of Mr. Obama's base, with 91% approving of his job performance.

In winning the presidency, Mr. Obama conveyed an image of remaining steady and focused during the banking crisis and economic downturn. Now, amid the oil spill and a weak economic recovery, Americans are taking a dimmer view of his personal qualities and leadership style.

Some 30% in the poll said they "do not really relate'' to Mr. Obama. Only 8% said that at the beginning of his presidency. Fewer than half give him positive marks when asked if he is "honest and straightforward.'' And 49% rate him positively when asked if he has "strong leadership qualities,'' down from 70% when Mr. Obama took office and a drop of 8 points since January.

Just 40% rate him positively on his "ability to handle a crisis," an 11-point drop since January. Half disapprove of Mr. Obama's handling of the oil spill, including one in four Democrats.

"As a Democrat and as a woman, I am disappointed in him," said poll respondent Melissa Riner, a 42-year-old law clerk from Mesa, Ariz. Referring to the oil spill, Ms. Riner added, "I don't think he's handling it. He doesn't seem to be doing anything. He just talks."

James Ciarmataro, a 23-year-old stay-at-home dad from Macomb, Mich., said it was difficult to relate to Mr. Obama, because the president is "eating steak dinners at the White House and playing golf" while the country is suffering.An independent, Mr. Ciarmataro said he would vote in November for "whoever seems the newest, and doesn't seem to have any ties to anybody else."

Tina Becker, a 47-year-old homemaker and registered Democrat from Wauseon, Ohio, who identifies herself as an independent, said she still strongly supports Mr. Obama. "But it might have made him look better if he communicated more about how things were progressing," she said.

In the survey, 45% said they wanted to see a Republican-controlled Congress after November, compared to 43% who wanted Democratic control. But even more telling is the excitement gap between the core voters of each party.Just 44% of Obama voters—those who voted for Mr. Obama in 2008 or told pollsters they intended to—now express high interest in the midterm elections. That's a 38-point drop from this stage in the 2008 campaign.

By contrast, 71% of voters who supported Republican John McCain in 2008 expressed high interest in this year's elections, slightly higher than their interest level at this stage in that campaign.

The gap helps explain why the Democratic National Committee is spending $50 million on a campaign to try to lure Obama voters back to the polls this year.

While a majority still favors greater offshore drilling, support has slipped considerably over the past month as the Gulf oil spill has grown worse—from 60% in May to 53% now.

Sixty-three percent support legislation to reduce carbon emissions and increase the use of alternative and renewable energy sources, even if it means an increase in energy costs.

Obama is too soft to be American president. He is one of weakest president in recent few years. unfortunately world scenarios and chain of events are also against USA .

One thing I fail to realise is his urgency to surrender the mantle the US holds to China!!!

Yusuf said:
One thing I fail to realise is his urgency to surrender the mantle the US holds to China!!!
Click to expand...

Obama will go down as the worst president in American History.

I fail to understand why he is so weak against Chinese aggression. Look at George bush. he may be unpopular but his policies were perfect and was straight forward. This guys is very timid .

Easy taking India as one example of his foreign policy-Supports Chinese who have peeked economically and stealing everything from USA down to the last drop of blood and supporting Pakistan a welfare state, missing the whole boat on India and the decades of growth that are coming. Domestically failing economic policy, raising taxes, 30 million unemployed under Obama,BP environmental disaster. Obama won the nobel peace prize but has not stopped one war. Also losing allies from Japan,Israel,Turkey and a crumbling and bankrupt NATO alliance.
A

i think its economics which is slowly wreaking powerful american president.today america is more dependent on china to bail america out. that wasn`t the case in past. plus Obama is president who had only little experience of working in politics. he onle one term as a sentor. so he is more of idoll men then begin practical. so u see baring india to have ET TECHNOLOGY/MAKING SURE THAT non-ntp members do not have this technology

LETHALFORCE said:
Easy taking India as one example of his foreign policy-Supports Chinese who have peeked economically and stealing everything from USA down to the last drop of blood and supporting Pakistan a welfare state, missing the whole boat on India and the decades of growth that are coming. Domestically failing economic policy, raising taxes, 30 million unemployed under Obama,BP environmental disaster. Obama won the nobel peace prize but has not stopped one war. Also losing allies from Japan,Israel,Turkey and a crumbling and bankrupt NATO alliance.
Click to expand...

I feel sometimes Obama is paying price for something he has not done . Economic and Afganistan problems are not created by him. But one thing is sure he has projected himself as a weak and timid president. His foreign policies are flawed and away from need of the hour. He is too rigid to accommodate need of his allies and too soft with countries with whom he should be tough,example is pakistan and China.I personally feel that he could have done better that what he is doing now.
You must log in or register to reply here.
Similar threads
USAF losing confidence in Boeing
Modi Confident India, US can Develop a Genuinely Strategic Alliance
Chinese billionaire confident $40bn Nicaragua Canal will be built
Confident of my Team - IAF Chief's New Year Message
Share:
Facebook Twitter Reddit WhatsApp Link