Compulsory military service in France to be introduced

If this comes true, France might have over a million people in its Armed forces soon 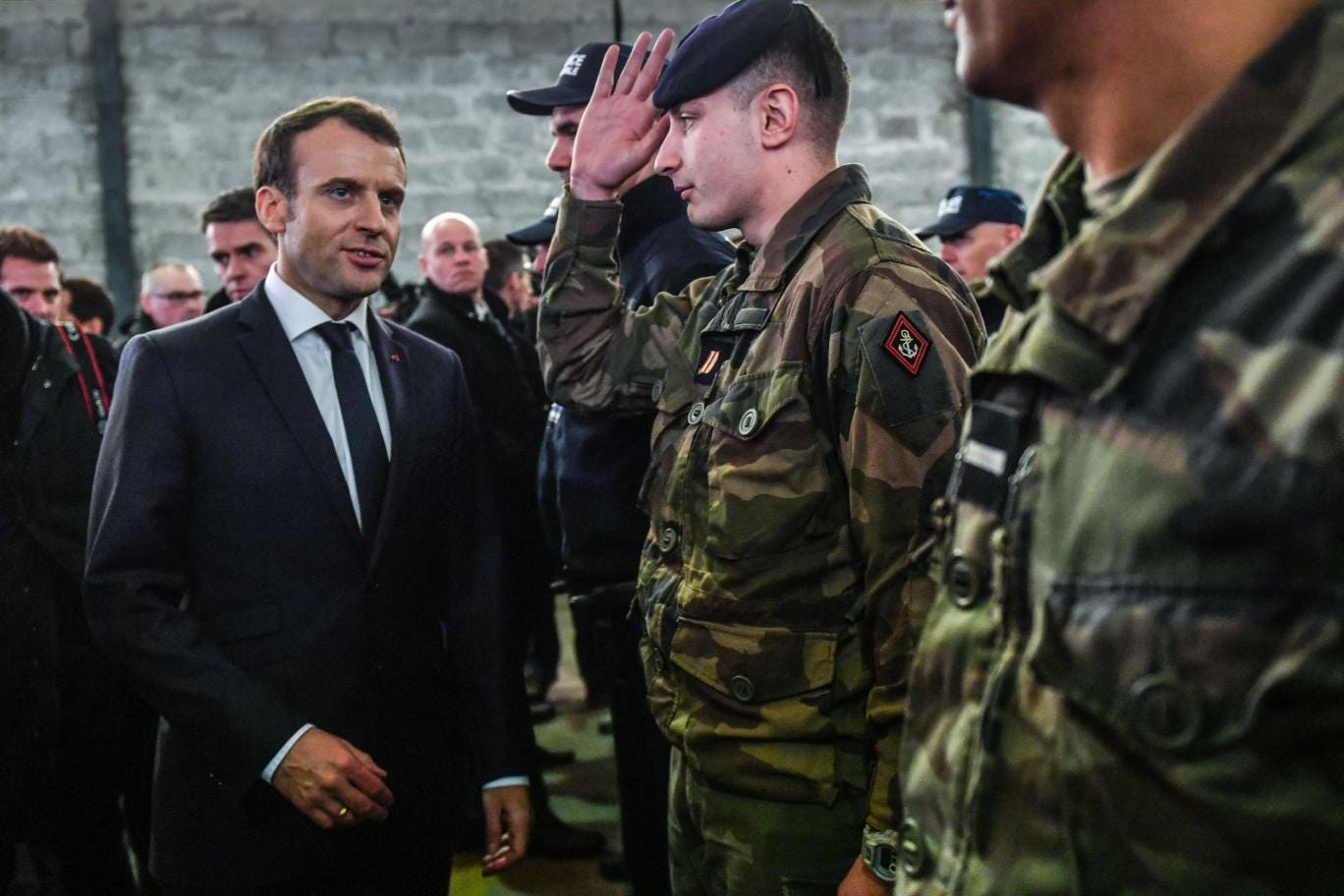 During his election campaign Mr Macron pledged to give all young people “a direct experience of military life with its know-how and demands” and said restoring national service would inspire patriotism and social cohesion.

Between 600,000 and 800,000 young people are year would face military training and spend at least a month with the armed forces – at great cost to the French state.


TRUMP TO HOST EMMANUEL MACRON AS HIS FIRST US STATE VISIT
The policy has caused a rift in the French cabinet after defence minister Florence Parly said last week that the policy would “probably not be obligatory” for young people.

But a spokesperson for Mr Macron overruled her on Tuesday and insisted that the service would be both “universal” and “obligatory” and that there would be no U-turn on the campaign pledge. The spokesperson left open the possibility that the service could involve “civic engagement” and said specific proposals would be outlined by a government taskforce in April.

Mr Macron is the first modern FrenchPresident not to have done military service, because he came of age after the practice was scrapped. The Government wants to trial the return of the scheme from 2019.

The centrist politician has been unclear about the exact nature of the service, suggesting in January of this year that it could involve “social, environmental, and cultural domains”.

READ MORE
During the French Revolution France pioneered military conscription as a condition of citizenship. By the second half of the 20th century the amount of military service required was scaled back from the 1960s onwards, with the practice finally being phased out between 1996 and 2001.

In Britain, National Service was ended from 1957 onwards, with the last conscript leaving the army in 1963. Many countries have abandoned conscription in recent years, preferring professionalised armies. The policy can be expensive, with countries that continue with the practice racking up huge defence budgets for little perceived military advantage.

We desperatly need it here in India

I agree we need compulsory national service in India. But not in the military. We can barely equip our existing number of troops as it is. Forget about equipping and training 40-50 million young men. A better idea would be to put people in disaster relief, firefighting, health services, farming help, infrastructure building, helping the police etc.

I think this will be good for France.

I was, perhaps still am, a fan of this.
But it doesn't seem practical, because this would form a force that numbers in excess of 20M.
Besides we already have NCC which can be expanded and will attract men who have the zeal for this type of stuff.

Considering Macron said this will be "universal" will they also be conscripting young women? It's only fair. And they never specified that its only for young men. They just said "young people". All I can say is if that happens, French army barracks will be quite the place to be :biggrin2:.

nongaddarliberal said:
Considering Macron said this will be "universal" will they also be conscripting young women? It's only fair. All I can say is if that happens, French army barracks will be quite the place to be :biggrin2:.
Click to expand...

They want 10% of the annual defence budget to do this... never going to happen. That money would be better spent buying equipment the forces desperately need. To assimilate children to French values requires much younger training than the time they are adults.
S

We have a need for a lot of man power. Consider the below scenarios:-
1. We need to equip our population to fight and defend themselves and their neighborhood during communal clashes.

2. We also need a force of citizens to fight terrorism within India.

4.There are regular natural calamities like floods and earthquakes or accidents like building collapses for which army is called.

5. In case of a war, we need to guard our vital installations public (OFB, ISRO, DRDO, Electricity generation plants, Dams etc) as well as private including industrial complexes against sabotage from enemy within.

6. Organized intelligence gathering so that enemies plans are found and necessary action taken. For this we need presence of young people in every city with eyes and ears open.

Likewise there can be numerous occasions where we need manpower. Army is already overstretched. If we have trained men, there will be a feeling of nationalism. We can train men from all religious belief as in army so that they don't fall into religious fundamentalism.

We need large number of men for these and many more purposes. It can be achieved if we make NCC training compulsory in all schools/colleges. Even gun training can make them a line of defence and can take care of their neighborhood. Even China wouldn't think of air dropping paratroopers as they would know that every youth in India is trained to take on any enemy.

This is the weirdest idea so far from President Macron. Originally he talked about a one month compulsory service, which has been dismissed by every expert as a joke . The armed forces do not even want to hear about the return of compulsory military service. What they want is highly trained, highly motivated young recruits.

Chances are we see some kind of purely civilian service emerge out of this. As hinted there


nongaddarliberal said:
The centrist politician has been unclear about the exact nature of the service, suggesting in January of this year that it could involve “social, environmental, and cultural domains”.
Click to expand...

nongaddarliberal said:
Considering Macron said this will be "universal" will they also be conscripting young women? It's only fair. And they never specified that its only for young men. They just said "young people". All I can say is if that happens, French army barracks will be quite the place to be :biggrin2:.
Click to expand...

This is a bad idea. Especially when there is no threat of invasion.

The cost of equipping a soldier is enormous. Not to mention the training.

If this goes through, then France will spend lot more on I'll trained, less equipped and useless force that can neither handle a warlike situation nor it's regular army having best weapons to take on it's enemy.

If I am not wrong, then France leaders might be worried of Barcelona kind of terror attacks. And they want to be ready for future. I bet this compulsory military training will not affect the outcome of these kind of attacks, but it will have seizable impact (negative) on regular armed forces and France economy

How can you say such thing??? How can you come to such conclusion? Military service should be completely voluntary.
C

Dark Sorrow said:
How can you say such thing??? How can you come to such conclusion? Military service should be completely voluntary.
Click to expand...

"France suspended peacetime military conscription in 1996, while those born before 1979 had to complete their service; since the Algerian War (1954–62), conscripts had not been deployed abroad or in war zones, except those volunteering for such deployments."


Seems the French ended conscription only relatively recently. I wonder what these new measures will mean in practice.

I guess the measures ( if they go into force) might be seen as a way of tackling France's high levels of youth unemployment .

Still, I can't the French school-leavers being particularly thrilled at the idea of compulsory service.
Last edited: Feb 21, 2018
You must log in or register to reply here.
Similar threads
Kannada can't be compulsory for instruction in schools:SC to Karnataka
Aadhar cards not compulsory, don't give them to illegal immigrants
Pakistan : PKR 230bn needed to ensure compulsory education'
Chinese to be made compulsory in Sindh schools
Share:
Facebook Twitter Reddit WhatsApp Link