Short-range antiaircraft missile system / anti-aircraft missile system of air defense. The development is carried out by the State Security Committee of the Almaz-Antei Air Defense Concern. On February 27, 2007, the NTS of the Military Industrial Complex under the Government of Russia designated the GSKB as the lead developer of the Unified System of Anti-aircraft Missile Weapons with the Air Defense Missile Defense System "Morpheus" (OCR of the same name). The complex is not a system of military air defense. In 2008, the development of a preliminary design project within the framework of R & D "Morpheus" was completed. In 2009-2010. the development of a technical design and the plans for the receipt of an SAM for armament of the Russian Armed Forces by 2015. The GSKB Almaz-Antey in 2010 developed a set of working design documentation for a multifunctional radar (IFRLS), manufactured individual completed IFDL devices and command posts, sample MFRS, manufactured chassis of the combat vehicle (ist.

According to unconfirmed data, as of the first half of July 2011, the production of a prototype 70N6 combat vehicle was completed. In August 2011, the media announced that the complex would be accepted for armament in 2013. There is also the possibility that the combat vehicle will be shown at the MAKS 2011 airshow (did not happen).

April 24, 2013 in the media, Deputy Minister of Defense Colonel-General Oleg Ostapenko said that the complex of high-altitude air defense of low altitude Morpheus will be adopted in 2015. 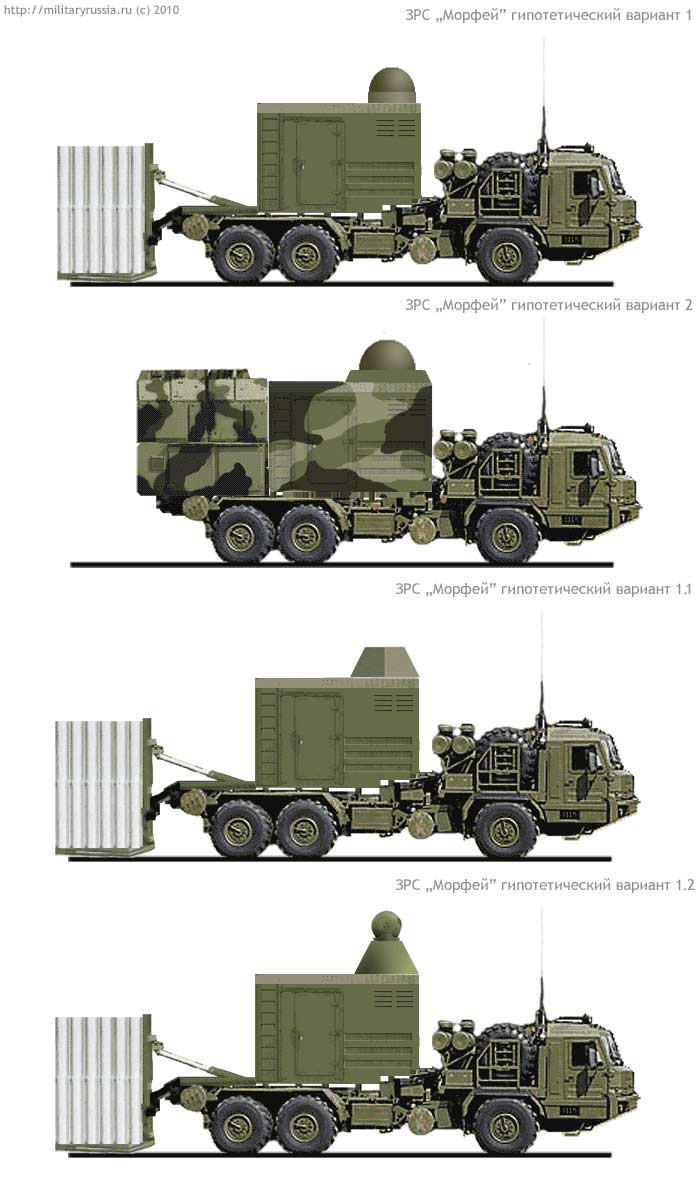 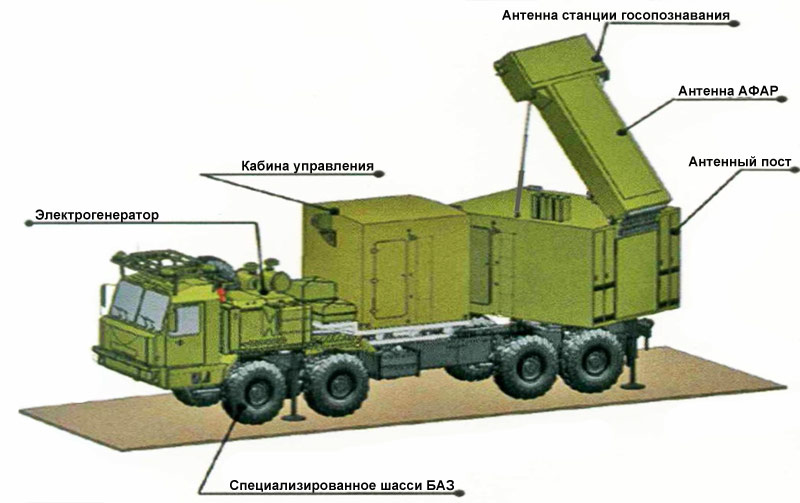 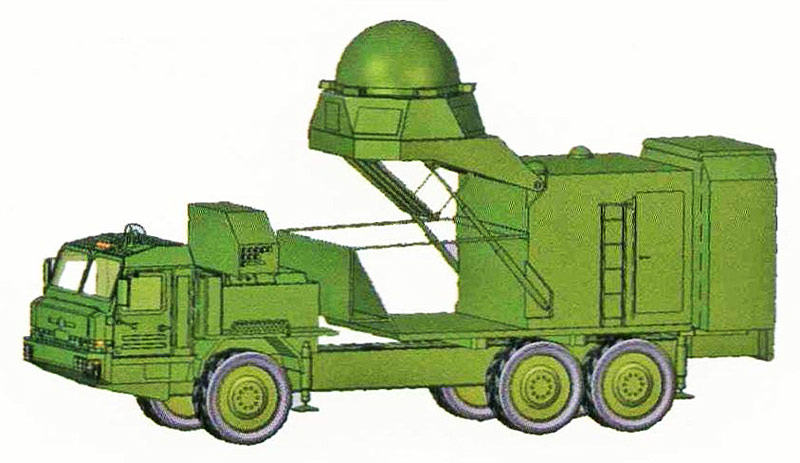 Variants of combat vehicles ZRK 42S6 "Morpheus" with anti-aircraft missile defense system with AFAR on the chassis of the BAZ and a 70N6 car with the AFAR radar with a dome lens (History of the domestic radar, M., "Capital Encyclopedia", 2011).

Combat machine 70N6 of the Morphei complex on the chassis of the BAZ-69092-012 in the marching position. Materials from posters from the armored vehicles exhibition in Bronitsy were used, June 2011, photo posters were provided by Muxel, reconstruction - http://militaryrussia.ru 09.07.2011). 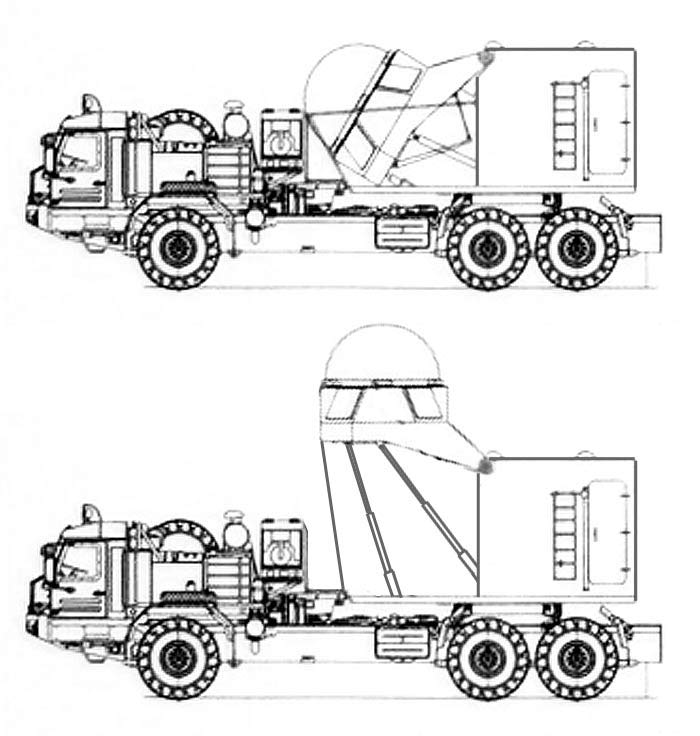 Combat machine 70N6 of the Morphei complex on the chassis of BAZ-69092-012 in marching and combat positions. Perhaps an early prototype of the system is depicted (a poster from the armored vehicles exhibition in Bronitsy, June 2011, a reconstruction of the species in combat position MilitaryRussia.Ru, photos are provided by Muxel, http:). 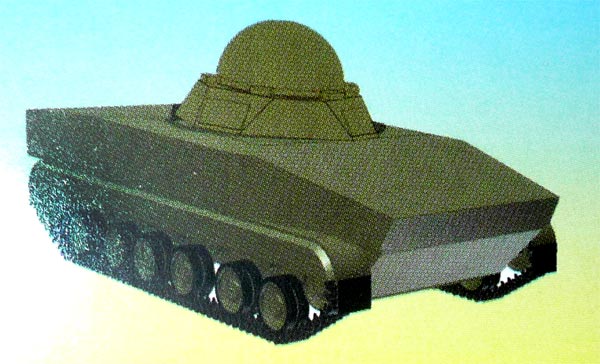 Combat vehicle of the Morphei complex on the BRM-3 chassis (project, drawing from the archive http://militaryrussia.ru/forum ).

Control system and guidance :
- command post of the SAM - car on the chassis "Tiger" or BAZ (wheel formula 4 x 4) 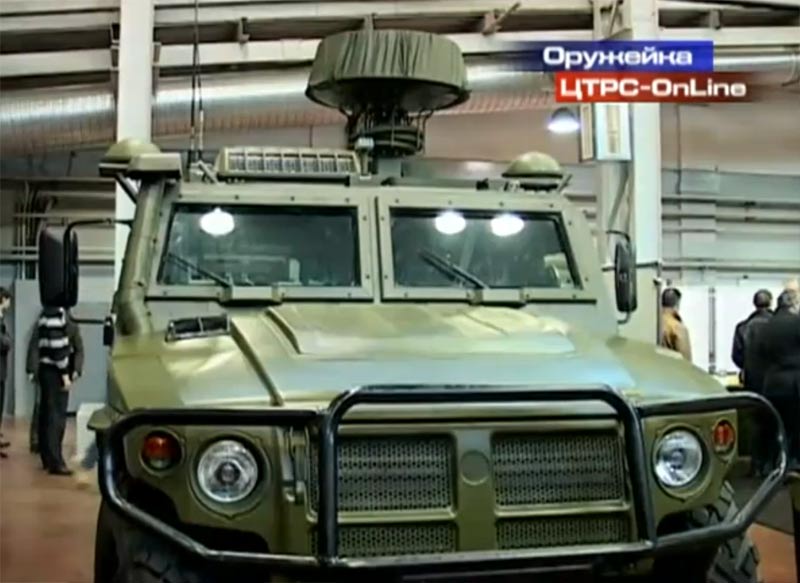 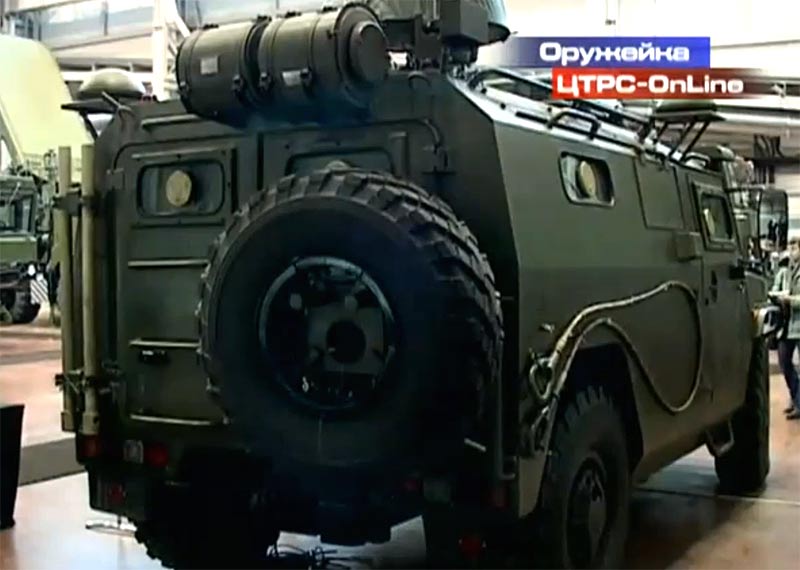 Presumably, the Morphei command post on the Tiger chassis during a visit to the GSKB of the Almaz-Antei Air Defense Concern was one of the ministers of the Russian government, 2010 (Fragment "Air Defense Systems S-500", http://www.youtube. com ).
- Multifunctional radar 29Y6, created within the framework of the RDF "Morpheus", is installed on a military vehicle 70N6 and according to unconfirmed data is a ring radar with a phased array or AFAR with a dome lens (probably hemispherical phased array). Probably, the hemispherical phased array consists of 2048 transmit-receive modules. With a high probability, command control is used on the SAM according to the radar data of the complex. According to unconfirmed data on the 70N6 combat vehicle, in addition to the radar, an infrared station will be installed. 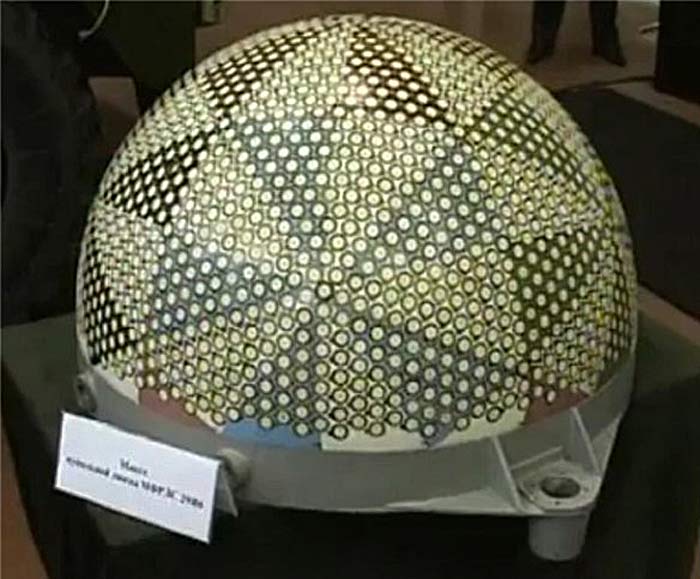 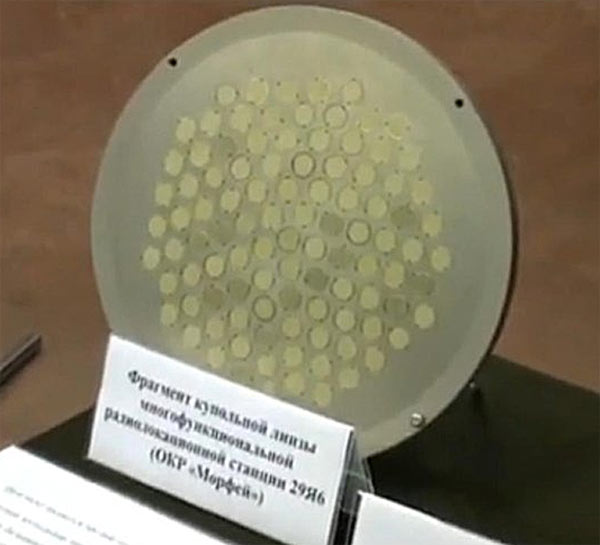 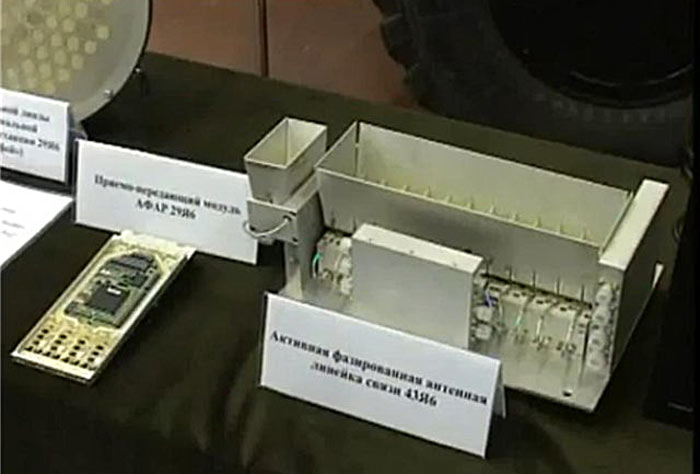 The model and sample-fragment of the domed lens of the multifunction radar 29Y6, as well as the receiving and transmitting module AFAR 29Y6 and the active phased antenna communication line 43Y6 (framing - geckosp, http://paralay.iboards.ru , "Marsh-throw", TV- program, TVC, February 2010)

The complex can be used as part of the EU ZRO or autonomously. Probably, the zone of shelling of the SAM will not have a "funnel" typical for many SAM systems.
The number of simultaneously fired targets is several.
The reaction time is faster than the "Tor-M1" and "Tor-M2" complexes.
The viewing angles are 360 degrees. on azimuth

According to the results of the exhibition in Bronnitsy in June 2011, it can be assumed that the 70N6 combat vehicle is the command center of the battery, and the PU packets of the vertical launch are on separate machines or installed on mobile non-automotive platforms.