Coming soon: Ministry of Defence’s cyber, space, special operations divisions
According to sources, the proposals for the three new formations — Defence Cyber Agency, Defence Space Agency and a Special Operations Division — are with other ministries for approval as the resources for them have to come from “accretion and not under save-and-raise”.

Union Minister for Defence Nirmala Sitharaman File/PTI Photo
RELATED NEWS
Five years after they were first proposed by the Armed Forces, the Ministry of Defence (MoD) is expecting the three new tri-service agencies in the field of cyber warfare, space and special operations to be raised shortly. Their formation was announced by the MoD in July this year, and the proposal is with the government for approval. “The new Defence Minister is also keen on seeing them through, and we are just awaiting requisite approvals from the Law Ministry and other government departments,” said an official source.

According to sources, the proposals for the three new formations — Defence Cyber Agency, Defence Space Agency and a Special Operations Division — are with other ministries for approval as the resources for them have to come from “accretion and not under save-and-raise”. The approvals are expected “within a couple of months”, said sources, after which these agencies, to be headed by officers of the rank of Major General and equivalent in the Navy and Indian Air Force, will be raised.

The cyber and space agencies will be based out of Delhi, for close coordination with their civilian counterparts, while the Special Operations Division will be based outside the national capital. The Special Operations Division will have components of the Special Forces of the Army, Navy and IAF, and will be equipped and trained together for various external contingencies. The Army currently has Special Forces battalions, Navy has Marine Commandos (Marcos) and IAF has Garud. This division, which will be based at a location which already has training infrastructure, will have two SF battalions at its core, along with teams from Marcos and Garud, sources explained.

Working in close coordination with the National Cyber Security Advisor, the Defence Cyber Agency will be have over 1,000 personnel. These experts will be distributed to various formations of the Army, Navy and IAF, and will focus on non-civilian cyber issues, including safeguarding critical infrastructure.

The Defence Space Agency will have over 200 personnel, who will work closely with ISRO and DRDO for better utilisation and integration of space resources. This includes information sharing from individual satellites, and surveillance from other satellites which can then be shared with the concerned defence service.

In 2012, the Chiefs of Staff Committee had recommended creation of three joint commands — in the areas of cyber, space and special operations — due to their increased relevance in modern warfare. The new joint military doctrine, released earlier this year, also underscores the need to prepare the defence forces for the “emerging triad” of space, cyberspace and special operations for future combat. But it was only in July this year that the Defence Secretary apprised the Unified Commanders Conference that the Defence Cyber & Space Agencies and Special Operations Division would soon become a reality.

While the 2012 proposal envisaged commands to be headed by army commander equivalents, the current proposal is only for agencies to be headed by Major Generals. Sources said the agencies may eventually be upgraded to commands, after they have stabilised in their functioning. As per the 2012 proposal, a Navy officer was to head the cyber warfare command, an IAF commander was to be at the helm of space command and an Army officer would head the Special Forces command. It is expected that the same arrangement for division of agencies between the three services will continue even now.

I guess beggars can't be choosers. Let's see how far this "accretion" goes.

I wonder about command and control. Who is going to coordinate their functioning? The govt has not even hinted at appointing a CDS (Chief of Defence Staff) as yet. The dynamics of modern battlefields call for joint planning and conduct of operations by amalgamating all three services — the Army, Navy and Air Force — under a joint commander. It also calls for joint training, integrated logistics and compatible equipment.

These new commands should be placed under the CDS. The Government needs to get cracking on this appointment first otherwise it would be like putting the cart before the horse.

No prizes for anyone who is skeptical. 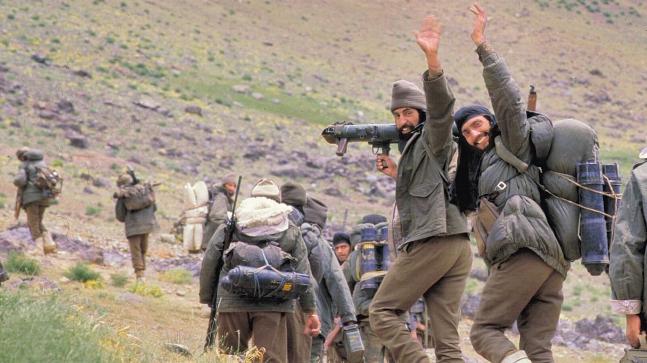 An Army officer and Kargil hero is now winning wars on the virtual battlefield. He recently foiled attempts by suspected Chinese and Pakistani hackers to break into his system, which prevented critical information from being compromised.

The officer discovered that the cyber attackers were trying to access his passwords after which he took steps to throttle their efforts.

If the hackers had managed to break in, they could have stolen sensitive material, sources in the Army told Mail Today.

It is suspected that the foiled attacks were launched by hackers from China and Pakistan who have been quite active over the past few years, targeting Indian military officers and networks.

The officer had taken part in the Kargil war and was awarded a gallantry medal for his valiant actionsagainst Pakistani intruders who had taken over Indian posts located on higher peaks that are traditionally vacated in winter months to protect troops from harsh cold.

In recent times, groups backed by Chinese and Pakistani authorities have been trying to break into the networks of Indian defence forces to extract information.

Along with fighting against Pakistan in Kargil, the officer also has significant exposure of operations along the Line of Actual Control with China.

The cyber attacks come at a time of simmering tensions at the border with both Pakistan and China. While Pakistani forces have been resorting to frequent ceasefire violations, the Chinese are involved in a war of words with India over the Doklam plateau row.

Hackers have in recent times made several attempts to break into military networks but the forces and officers have helped thwart a majority of them by following the laid-down procedures.

In April last year, the Army Cyber Group had uncovered a coordinated effort to hack into the computers of its senior officers with decoy emails that purportedly contained links of “their sex videos”.

At least four officers of lieutenant general-rank posted at South Block headquarters were the target of the malicious bid. In an effort to enhance its combat capabilities in the virtual domain, the defence ministry is working towards establishing a new cyber agency to tackle attacks by Chinese and Pakistani hackers.

To test its capabilities, the new agency has also carried out its first cyber warfare exercise under which Indian forces hit their own networks to check for loopholes and steps required to strengthen the system, sources informed.

After a few incidents of virtual honey-trapping by Pakistani agents, the Army has been on an overdrive to educate its personnel to guard against such attacks.

One example of this is evident in calling an official Army telephone number, which plays a recorded message about the need to be careful from foreign agents who have been trying to extract information by all means.
You must log in or register to reply here.
Similar threads
Brahmos with 800-km Range capable of striking deep inside China - Coming Soon
Boeing says IAF inquiry for twin-engine fighter coming soon, hopes to build 200 in India
Coming Soon: Russian- Built Super Aircraft Carriers For India?
4 Billionaires are Extremely Worried that America’s Next Big Financial Crisis is Coming Soon
Share:
Facebook Twitter Reddit WhatsApp Link