This thread is dedicated to discussion of upcoming Combat Air Teaming System (CATS). 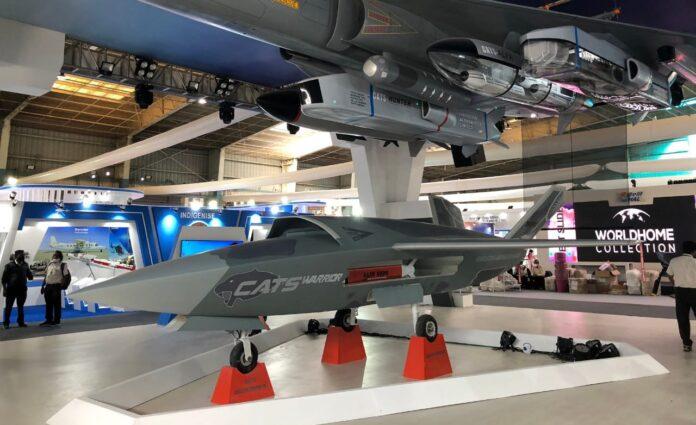 he Aero India 2021 is all set to start from February 3, but the aerospace geeks started sharing pictures from the stalls which were being setup by the companies to show their products during the exhibit.

One such stall is from Defence PSU’s (HAL) Hindustan Aeronautics Limited. HAL has showcased many models in their stalls but out of all models the lineup of CATS (Combat Air Teaming System) Drones is the point of attraction.

HAL has showcased its 3 different Drones under CATS lineup. They are the HUNTER an air launched Wingman, The ALFA an air launched Swarms drone and the obviously the WARRIOR the loyal Wingman.

This all three system is part Combat Air Teaming and will fly side by side with a combat aircraft. As of now there is no official confirmation on the role of HUNTER. Most likely HUNTER is an air launched Wingman which is retractable but at the same time capable in conducting kamikaze (suicide) missions as it carries around 250 KG of warhead.

As you can see in the image there are 2 Variants of HUNTER attached with the LCA Pylons. The first one with transparent fuselage is equipped with AESA (Active Electronically Scanned Array) radar.

While the second HUNTER drone is carrying an optical sensor (Infrared Search & Track) in its nose. Both of these platforms will be used to provide additional intelligence to combat aircraft and if required it can also act as a cruise missile.

ALFA is a system which carries 4 swarm drones inside its container. It can be launched from a combat aircraft. The container or we the carrier has a range of about 75 KM (estimated) once launched from an aircraft.

After 75 KM, all the 4 swarm drones will get separated from its carrier and these swarm drones can travel around 100-150 KM in its own propulsion.

Overall ALFA has a range of about 175-225 KM, making it an excellent standoff weapon. LCA Tejas can carry 4 ALFA in its hardpoint, meaning 20 kamikaze swarm drones.

The main center of attraction is the ‘WARRIOR’. It is a loyal Wingman which will be controlled by the pilot of its mother ship, in this case LCA Tejas or Rafale.

As we can see from the image that the WARRIOR is having a stealthy profile, it can carry precision guided munitions and air-to-air missiles in its internal weapons bay.

The early variant of UAV will be powered by 2 PTA7E engines. PTA7E is capable of generating thrust of 3.73 KN. The production variant is most likely to be powered by some HTFE engines.

Small in size and edgy design of the platform, makes a highly stealthy aircraft, and the absence of afterburner engines further reduces the overall IR signature of the platform.

In all together all the three teaming system is going to significantly increase the combat capability of any aircraft. 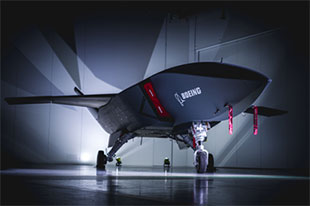 It’s a challenge we didn’t take lightly. How can you extend and expand the capabilities of some of the world’s most elite airpower systems?
By multiplying their capabilities – and exponentially increasing their ability to project force as a result.
The Boeing Airpower Teaming System is a new unmanned aircraft using artificial intelligence to be that force multiplier.
It’s designed to work as a smart team with existing military aircraft to complement and extend airborne missions.
The Airpower Teaming System has enough capability to get the job done – from ISR to tactical early warning and more – but with a low-cost design that allows operators to confidently put it on the front line.
That’s airpower reimagined.
https://www.boeing.com/defense/airpower-teaming-system/index.page
Airpower Reimagined 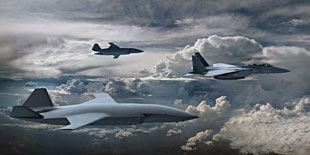 The Boeing Airpower Teaming System will provide a disruptive advantage for allied forces’ manned and unmanned missions. It will:
Global System

The Boeing Airpower Teaming System is the company’s first unmanned system to be designed and developed in Australia.
Designed to provide a transformational capability for global defense customers, it is the company’s largest investment in a new unmanned aircraft program outside the United States. This purpose-built aircraft can be missionized to suit country-specific needs.

A full-scale model of India’s first-ever semi-stealth drone built as part of an indigenous programme called Combat Air Teaming System on display at Aero India 2021, at the Yelahanka air base - PTI


Hindustan Aeronautics Limited (HAL) has received Request for Proposal from the Indian Air Force for supply of 70 Basic Trainer HTT40 aircraft.
It had recently bagged a ₹48,000-crore IAF order to supply light combat

The RFP documents, with an additional clause for 38 more trainer aircraft, were handed over to HAL by Air Marshal Sandeep Singh, DCAS, and VL Kantha Rao, DG (Acquisition), Ministry of Defence.

The certification will be given against the Programme Compliance and Quality Review (PCQR). The production will take place at HAL’s two manufacturing units at Bengaluru and Nashik. The RFP has come within six years from the first flight of HAL, which is the shortest time-line in the aircraft industry. The trainer will have more than 60 per cent indigenous content and is supported by agencies such as CEMILAC, RDAQA and ASTE.

Chatterjee added: “The Combined Air Teaming System (CATS) programme will have a mother ship (fighter jets) and few autonomous unmanned aerial vehicles known as CATS Warrior. The vehicle will have the capacity to carry out a strike. It will be able to stealthily enter 700 km inside enemy territory.”

On the RUAV, he said: “It is a helicopter drone concept designed to carry load to inaccessible areas, borders and high-altitude regions. This will also be fitted with a surveillance payload.”

R Madhavan, Chairman, HAL, said: “We will be ready to fly it in four-five years time and we have budgeted ₹400 crore of our own money for the projects. We are also exploring integrating CATS with Tejas and the Jaguar.” .

With this contract award, GE Aviation has initiated the development of a raw material supply chain in India as part of its “Make in India” and “AatmaNirbhar Bharat” strategy. The award of contract followed HAL’s successful bidding in GE’s Global request for quotes (RFQ). The ring forgings will be manufactured at HAL’s newly established, state-of-the-art ring rolling facility at the Company’s Foundry and Forge Division in Bengaluru. The division has, after a rigorous audit process, obtained GE Aviation approvals for its quality system and special processes.

CATS vs BATS
A

According to interview given to DDR by HVT sir, HAL will develop Cats warrior 0.5, 0.33 and 0.25. They will also develop drones for Army and Navy with different requirements.