I ask these #Lugansk people what they think of the Kiev government. The answer "Fascists" - English translator -
https://www.youtube.com/watch?v=0pFbXMfL-jw "¦ 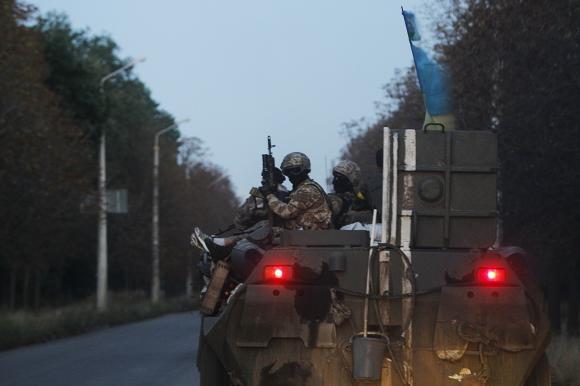 The Changing Face of War: Into the Fourth Generation - LIND
Click to expand...

Militias preparing a major new "pot" for the Army of Ukraine 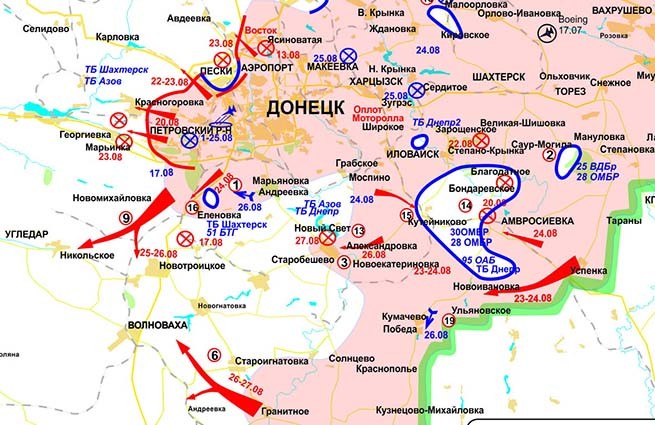 DNR militias continue to attack the position of the military in Ukraine. Currently militia trying to create another "pot" and surround area north of Donetsk. If the plan supporters Donetsk People's Republic carried out, they will take in the ambiance battalions "Dnepr" and "Azov". Militias come from two sides: from Yelenovka and from Granite. If successful, the self-defense forces will meet in Volnovaha. In this case, will be surrounded by a thousand Ukrainian military. "The strategy of boilers" worked militia during the last counter-offensive. They regularly use the enemy on both sides and take it into the environment. Massive attack militia began late last week. During this time he was able to take all the strategic points of the region: three checkpoints on the border with Russia, mound Saur-Grave and others. At the moment the self-defense forces control the entire border line DNI with Russia.

According to preliminary data, the militia headquarters of Donbass, the total loss of security forces over the past day amounted to five tanks and three armored vehicles, up to ten guns and mortars, and fourteen cars. Killed and wounded up to 80 people.

At the Donetsk National Guard under the direction of continued retreat from Mariupol. Militias were able to repel several settlements, including Granite, Solncevo, Telmanovo and Uspenka.

In the area of "‹"‹the village of Victory clash between security forces and militias. As a result, four Ukrainian soldiers were killed and six wounded. Between the Self-Defense Forces and the National Guard and was a fight for Kuteynikova. Significant losses were units of the 51st Mechanized Brigade security forces. Destroyed up to four self-propelled guns, two guns D-30 and one armored tractor.

During a fierce battle with the militia units of security forces in the area of "‹"‹the Red Talovka Ukrainian army also suffered heavy losses. Were killed and wounded up to 55 militants. Destroyed six terrain vehicles.

Russian President Vladimir Putin's stealth war of attrition may be paying off. As evidence mounts that pro-Russian separatists are being supplied with new weapons from across the border, some Ukrainian soldiers are now refusing to fight.

In Novoazovsk, a Ukrainian unit staring down tanks, artillery and infantry personnel responded to shelling by sitting down, The New York Times reported Wednesday.

"Anybody who refuses to fight, sit apart from the others," a commander from the 9th Brigade from Vinnytsiaordered, The Times reported. Eleven men obliged.

"Some troops were in a full, chaotic retreat: A city-busload of them careened past on the highway headed west, purple curtains flapping through windows shot out by gunfire," The Times said.
Click to expand...

Another clear instance of propaganda by MSM.

Never underestimate the power of revanchism and the collective cultural insecurity that fuels it - despite countless bloody examples through history to learn from, we never seem to.

The above is a quote from american writer from my post before. In retrospect the allies did the right thing after GermanyÂ´s unconditional surrender:they knew that big seed of the WW2 was GermanyÂ´s seek for revanchism after Versailles peace treaty. Allies made sure to take away seeds of future revanchism. The results are to be seen in current Germany. How different was the path for former SU, current leadership of Russia seek revanchism, feed the imaginative threat scenarios to their people. Feed collective insecurity to their people and are ready to plunge Europe to war.

Report from volunteer Alexander Zhuchkovskogo on purchases for the national militia Donbass We continue to purchase equipment and resources for military militia Donbass. After the report on August 6 the necessity for urgent deliveries DNR material resources, the amount of aid increased substantially. Over the past two weeks in total, we have received from donors in Russia and from abroad about 13 million. 200 thousand. Rubles.

how pathetic buried Punisher, a representative of the exploiting class metropolis United States. "held funeral Brand Poslavskaya, Major American Army and United States citizen, who belonged to the elite of the American armed forces, and graduated from the Military Academy at West Point."

BERLIN, August 28 - RIA Novosti, Maria Knyazev. Ukraine should pay for Russian gas already delivered, the price of which is disputed, RIA Novosti said the vice-president of the European Commission responsible for energy GÃ¼nther Oettinger.
"Without a doubt, this gas was delivered and must be paid. We need an honest package, a clear timetable - how much time is from Ukraine, and when any amount must be paid. We need a compromise and (his achievement - Ed.) Possible," - Oettinger said, replying to a question whether he will be as an intermediary in gas negotiations between Russia and Ukraine insist that Ukraine has paid back.

On Friday, August 29, held talks with the head of the Ministry of Energy Oettinger Minister Alexander Novak. It is expected that a tripartite meeting of the Russia-Ukraine-EU (which mediates the European Commission) will be held in early September.
According to Ettinger, under the interim plan solutions gas problems between Russia and Ukraine, the European Commission wants to develop an intermediate rate on the Russian "blue fuel" that can act for Ukraine to the decision of the arbitration court in Stockholm. "There should be an intermediate stage <...> Then there is an award, we have to accept it," - said Ettinger.

08/28/14 Intelligence militias. Generals lead soldiers to slaughter. "Week Ukrainian troops lost 1,400 killed. legendary warlord, head of the Rapid Response Group (RRG) Lugansk gives his assessment of the professional level of Ukrainian generals. Neither of which strategic calculations can not be considered. Parquet generals and Colonels driven soldiers to slaughter. Their actions are not amenable to even describe. Calling it reasonable of warfare impossible. Unable to fight, carrying heavy losses, the National Guard officers take vengeance on that haphazard shelling residential areas of the cities of New Russia. According to intelligence RRT, only last week of July the Ukrainian troops lost in killed 1,400 people. When losses army LC - ten (10) persons. Whereas at the beginning of ATU loss ratio is 1: 140. third wave of mobilization is milled in the Donbass. Ukrainian authorities are forced mobilization. waiting for new fighters loyal death . Therefore, they run at the first opportunity. "