Choose between cricket and studies: Stephens to Unmukt

New Delhi A day after he led the India Under-19 cricket team to World Cup victory, the Association of Old Stephanians took up the case of cricketer Unmukt Chand, who has been disallowed by St Stephen's College to sit for his annual exam because his class attendance was poor.
The Under-19 captain was forced to approach the Delhi High Court. According to the petition, he said he was unable to attend classes because of cricket matches, including the Indian Premier League.

He requested the High Court to ask his college to allow him to sit for the annual exam.

The Association of Old Stephanians on Monday said Unmukt's case illustrated the archaic rules. It asked colleges affiliated to Delhi University to be flexible for aspiring sportspersons while implementing the rules.

The association appealed to St Stephen's College and Delhi University "to take necessary steps to ensure that promising sportspersons are encouraged to perform better and bring laurels to the country".

Ashish Joshi of the association said there were many students like Unmukt who take admission in Delhi University under the sports quota, but face problems because of their sports responsibilties.

"Earlier, teachers would help sports quota students by taking separate tutorials or holding extra classes. The atmosphere in the college should be conducive for such students," he said.

"Unmukt had approached the college principal. He could have taken his case as an exception and allowed him to sit for the exam. However, the case was transferred to the university officials. They simply barred him. As a result, the cricketer had to approach the court," he said.

Udit Bhatia, an alumnus of St Stephen's College, said the nature of the rules create hurdles for sportspersons.

"The university has strange rules when it comes to attendance. A student who has taken admission in a college under the sports quota is required to attend at least one-third of the total number of classes. Moreover, he cannot forgo his sports duties," he said.

Sachin is 10 pass. Have the talent follow your dreams. Trust yourself and work hard. You will employ people coming out of Stephens to manage your endorsements.

Just one thing, don't let fame get to your head. Be focussed and dedicated to your passion.

One reason why Sports in India are at such a sorry state.

Yusuf said:
Sachin is 10 pass. Have the talent follow your dreams. Trust yourself and work hard. You will employ people coming out of Stephens to manage your endorsements.

Just one thing, don't let fame get to your head. Be focussed and dedicated to your passion.
Click to expand...

That's not really the issue ,

The Issue is institutions in India instead of supporting budding sports talent work actively to present obstacles to its growth .

The academic gurus in this country far from being benevolent and understanding to their young charges
use the shield of unbendable rules to nourish their own megalomania,

and i speak from personal experience when i say they often feel hostile towards students who are able to gain success without
treading the beaten track that they try to impose upon them ,

Such an action is just a reflection of the same mentality , and is more prevalent among the premier institutions

The above incident only goes to show How little respect is given to Sports and sportsmen in our Country.
T

Stephens has a very typical high headedness syndrome, so is the case with the faculty there. And if anyone from outside says a word, they will claim their autonomy is under threat, and will cry a murder!

thakur_ritesh said:
Stephens has a very typical high headedness syndrome, so is the case with the faculty there. And if anyone from outside says a word, they will claim their autonomy is under threat, and will cry a murder!
Click to expand...

The faculty of these Blue-ribbon institutes vainly believes that its them or their
ostentatious Rule book that is responsible for their Prestige while the truth is that
Its the quality of Intake that they get in terms of applicants purely on the basis of their reputation which deserves the credit.

I challenge that if you replace the faculty of these institutes such as IITs or Stephens
with those of their lesser known counterparts , keeping the same entrance procedure
It wont make a shred of difference to the quality of their Output.
Last edited: Aug 30, 2012
P

Top US Universities have seats for high performing athletes such as Olympic athletes, swimmers, etc. Since they are required to put in several hours of hard practise every day, a student good in academics is `attached` to these champs who helps out with assignments etc. Indian colleges/universities should also give encouragement to students. Govt/Public Sector Organisations do give steady employment to sportspersons though.
T

I wouldn't write Stephens off, nor the faculty there, but yes, a bit of it is over blown than what's due.

Stephens has had a history, and they have played a significant role in shaping up the country, and the high headedness gets carried forward from there. I will put it like this, there are elitist schools in this country and then there are institutes like Stephens.

If we go back a couple of decades, the time when civil services was still the cherished dream of the brightest of the country, Stephens was contributing one of the highest numbers, and even today their students do make decent cuts in the CAT.

This has penetrated deep within the mindsets of the management, faculty, and the pass outs.

Unmukt being made to drop a year comes from here that no matter what, they are not ready to make a compromise, though in a way it's good as well, at least there are some institutes that can hold on to their worth in this country no matter how big a name, but this is stretching it a bit too far. The institute would be compromising a full one year of this student, and that's not worth setting as an example.

About the argument, this being the reason why India produces less number of sports persons, Stephen's management in hushed voice would say, we are not interested in producing sports persons, though they do give admissions based on sports quota.

Mind you, that's not my reasoning.

In India, people with faike degrees, cheating in exams in open, plagiarism etc are growing while we are unable to help our sportsmen. In US, the athletes are only allowed to play if they get benchmarks grades or above. they have option of home school too.

instead of giving a national hero a chance to get higher education, we are making things more difficult for sportsmen.

India's Under-19 cricket captain Unmukt Chand won his battle with his St Stephen's College today, with Delhi University allowing him to move to the second year and complete his first year exams in the forthcoming semesters, recognising his case as "rarest of rare".

With much hue and cry raised over St Stephen's decision to bar Unmukt from exams due to low attendance, Vice Chancellor Dinesh Singh, who received a phone call from HRD Minister Kapil Sibal, intervened in the matter, allowing him "to move to the second year of study".

He would be allowed "to clear his examinations during the course of third and fourth semesters for the backlog of the first two semesters," Singh told reporters.

Unmukt, who captained the Under-19 Indian side to World Cup victory recently, had earlier moved the Delhi High Court against St Stephen's College.

"He has done so much for the country. We will recognise that... The situation has been very unfortunate. The University has been very liberal in this regard.

"The college did not bring it to our notice. We would have helped them earlier. Nobody, not even Unmukt, approached us. I wish he had come to us earlier," Singh said.

Sibal had yesterday spoken to both Singh and St Stephen's Principal Valson Thampu.

Singh had yesterday indicated his "positive inclination" on addressing the issue in Unmukt's favour. Union Sports Minister Ajay Maken had also written a letter to Singh in this regard.

"Unmukt has distinguished himself and brought laurels to the nation through his exploits in the field of cricket by not only representing his country but also by playing a crucial role in helping India to win the U-19 World Cup," he said.

The University recognised his outstanding achievement in a field of sport and comes under the category of "rarest of rare" cases under its regulations and so they decided to take a liberal approach on the issue, Singh said.

Unmukt was refused an admit card ahead of his second semester exam in May but the court intervened and asked the college to allow him to sit for the exams.

However, he could appear only in two out of four papers as by the time the court ruling came he had already missed two. His results, and hence promotion, were withheld pending the court proceedings.

Delhi University rules mandate a student to have at least 33.3 per cent attendance in an academic session after all exemptions but the 19-year-old could not attend the required number of classes owing to his cricketing engagements.

Thampu had said he was only upholding the University regulations while refusing Unmukt an admit card.

"I came to know (about the case) only two days back. We need to redefine education. If you look at a person like Pullela Gopichand, I have no idea what degrees he has, but I consider him more educated that someone having a doctorate degree," said Singh, while emphasising that sports should be considered at par with academics.

A number of former alumni of the college as well as cricket captain Mahendra Singh Dhoni, had spoken out in favour of Unmukt.

Maken had written to the Vice Chancellor yesterday that such episodes were discouraging for young sports persons. 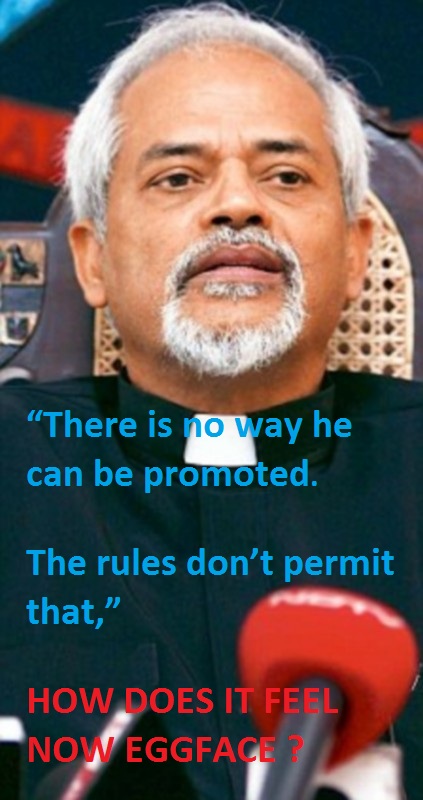