○ More and more Chinese patients are traveling to India for medication and treatment, especially for liver diseases and cancer 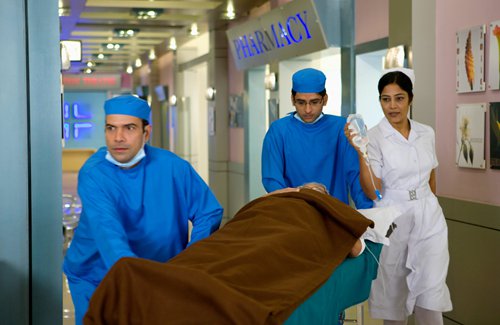 Hua Li (pseudonym) looked out of the window at the airport, her eyes full of hope. It was the 40-year-old's first trip abroad, and her destination was an unlikely one for a Chinese person who had never been abroad before: New Delhi.

14 years ago, Hua was infected with hepatitis C by a blood transfusion during surgery. Before the trip, she was already in the middle stage of liver fibrosis, which might eventually lead to cirrhosis and even liver cancer. Treatment in China was costly but ineffective.

Then she found companies that are willing to help Chinese patients like her seek treatment in India at a reasonable cost. In New Delhi, Hua was taken to one of India's best liver doctors in a private hospital and prescribed medication not yet available in China. Within four weeks, Hua's symptoms had vanished, and hepatitis could not be detected during a regular health check.

"The professionalism and cleanliness of India's private hospital is impressive. It's more like a hotel, unlike Chinese hospitals which are so crowded," Hua told Liaowang Institute, a Chinese think tank.

Hua is one of a growing number of not-so-wealthy sick Chinese traveling to India for medical treatment, attracted by its relatively low medical costs, wide range of medication to choose from and its internationally-proven medical expertise.

The growing demand has led to an increasing number of companies in China providing medical tourism services in India, targeting Chinese patients from third- and fourth-tier cities.

Pharmacy of the world

There are nearly 10 million hepatitis C patients in China, making it the nation with the most HCV infections. But the safest and most effective medication so far for hepatitis C, direct antiviral agents (DDAs), didn't enter China until this April due to the country's long and complicated drug approval process. DDAs have been proven to be at least 90 percent effective in curing the disease.

"Compared with the size of the hepatitis C-carrying population, many of those infected aren't aware that they have it, and the diagnosis and recovery rate have been continuously low. But actually, hepatitis C is completely curable," Wei Lai, head of the Hepatology Institute at Peking University, told the Southern Weekly.

While China sets strict barriers and hefty prices on imported drugs, India has long been known as the "pharmacy of the developing world," largely because the Indian government has granted compulsory licenses for expensive drugs so Indian manufacturers can produce these drugs without fear of being prosecuted under patent law.

According to the WHO, compulsory licensing is when a government allows someone to reproduce a patented product or process without the consent of the patent owner.

Glivec, a leukemia drug produced by Swiss pharmaceutical giant Novartis, for example, costs 23,500 yuan ($3,783) each month in China. Its Indian generic version Veenat, a drug produced by India's Natco Pharma which claims to have the same active ingredient and effects as Glivec, costs as little as just 200 yuan each month.

These generic versions are illegal in China because they are not officially approved. According to the country's drug administration laws, such drugs are regarded as counterfeit.

In the past, a lot of Chinese patients unable to afford the prices of imported drugs in China have tried to access cheaper Indian generic drugs through purchasing agents.

But as China has cracked down on the smuggling of these drugs in recent years, that channel has become more and more dangerous. This is what prompted patients like Hua to visit India herself. 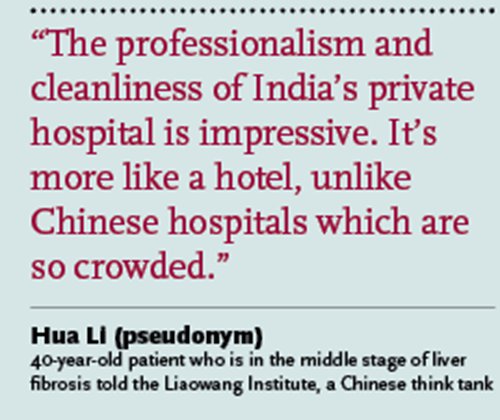 Apart from cheaper and more advanced drugs, India is also known for the quality of services in its private hospitals.

India's healthcare system is marked by inequity. While those living under the poverty line have to endure limited access to medical care, a low doctor-patient ratio and poor sanitation in public hospitals, the middle and upper classes can enjoy quality treatment in private hospitals with doctors who have studied in Europe or the US.

Some of its best private hospitals are famous worldwide. Fortis Hospital Bannerghatta, a hospital in Bangalore, has been ranked as one of the top 10 hospitals in the world for medical tourists for five consecutive years by the Medical Travel Quality Alliance, an international organization that aims to improve quality in medical tourism.

According to the Medical Tourism Market Report 2015, India was "one of the lowest cost and highest quality of all medical tourism destinations; it offers wide variety of procedures at about one-tenth the cost of similar procedures in the United States."

The Indian government has also been trying to promote the market by liberalizing rules to make it "very easy" for foreign tourists to get a visa for medical treatment in India, the Times of India reported. The number of arrivals in the country on medical visas was 66,254 in 2014, which grew to 122,121 in 2015 and 177,972 in 2016.

For Chinese patients, the cost of a 3-day medical trip to India ranges from 30,000 to 50,000 yuan. One medical management company told the Global Times last year that they have so far organized over 20 group tours to India for patients with liver diseases, and the cost for each person is 40,000 to 45,000 yuan. That includes plane tickets, accommodation, medical checks, medication and a 12,000 yuan service fee.

While some Chinese patients choose to go to India with the help of agents, some choose to visit India on their own, which cuts costs further. They include Mr Liu, a man from North China's Hebei Province who was diagnosed with hepatitis C this February.

"Before I went to India, I did health checks in a big Chinese hospital. But the equipment in India's hospital seems to be more advanced, and they detected that I had cirrhosis in addition to hepatitis C," he told Liaowang Institute.

I cant believe this is Published in Global Times .

I think the only true winner from this stand-off in dolam was GlobalTimes, they are/were getting shit ton of traffic from Indian media and citizens.

Now that the stand-off has end, its time to keep the viewer base intact by publishing pro India articles.

Akshay Fenix said:
its time to keep the viewer base intact
Click to expand...

sure , they knows that indians belive in media more the god and blindly follow it...
not only comman man , but politicians , police , ......arrey aab to judiciary bhi media challa raha hai.....

For more info on Fake Drugs,read these:

square said:
sure , they knows that indians belive in media more the god and blindly follow it...
not only comman man , but politicians , police , ......arrey aab to judiciary bhi media challa raha hai.....

not only India but almost every country in this world.

Still things are not that bad Sir ji.

global times usually is looked on as one tabloid in China like Sun in Britain.
its opionion meets public opionon,but usually keep distance with official one.

I cant believe this is Published in Global Times .

if you read global times regularly, you won't be surprised.

It weird that India has something to offer cheaper than china.
S

Better to focus on saving our children. UP government is epitome of ineptness

Bharat Ek Khoj said:
It weird that India has something to offer cheaper than china.
Click to expand...

that is reflected by the sino-india trade.

if immigrant policy were allowed, many indians would move to china for better jobs ,that is to say, india would export labour to CHina.

Better to focus on saving our children. UP government is epitome of ineptness
Click to expand...

how is this relevant to this thread?
N

This is a growing industry.

A few months back, I met a Chinese dude who was traveling to India to work out a deal with Fortis for bringing in patients for treatment from China.

A lot of countries offer cheaper and better medical treatment than China.

Apparently there are suites similar to 5 star hotels in apollo Hyderabad, lodging alone costs up to 25k per day. Probably there are similar facilities all over India.

Basically catering to all income groups.

Once I was surprised to find a lot of Arabs in a big hospital in chennai. You'd think all Arabs would go to Mumbai or kerala, and chennai is on east coast.

That hospital was famous for nephrology department.

ezsasa said:
Once I was surprised to find a lot of Arabs in a big hospital in chennai. You'd think all Arabs would go to Mumbai or kerala, and chennai is on east coast.

That hospital was famous for nephrology department.
Click to expand...