10 of the worst Photoshop disasters - in pictures

With an eerie floating head and torso looming above a doll-sized figure, it could be a still from a supernatural movie. Instead the image now spreading far and wide is another spectacular Photoshop fail for Chinese officialdom.

The comically inept piece of doctoring, published by the government of Ningguo in Anhui province, was intended to show the concern of vice-mayor Wang Hun and other officials as they visited an old lady in the city.

But authorities deleted it, apologised and ordered an employee to write a self-criticism after they were deluged with mockery by internet users.

In a statement the officials said they had indeed visited centenarians including Cheng Yanchun during a Chinese festival. But an employee had merged two shots because the layout of the room where Cheng was pictured had prevented the photographer from capturing her and the officials in the same image.

"Cheng was sitting on a chair on the balcony, under the sun. The balcony space was very small and the camera lens could not cover the whole scene "¦ When the employee of the municipal civil affairs department uploaded the photos "¦ he simply merged two shots," the government said.

"We express deep regret to internet users for its negative influence "¦ We will learn from the experience, to improve civil affairs work."

It said the party committee and government had acted rapidly because of their serious concern, ordering the civil affairs department to require a self-criticism report from the employee and criticise him across the city.

"Official fraud, making rumours, and there is no need to take responsibility? But a netizen whose post is forwarded 500 times has to take criminal responsibility," wrote one microblogger, Zhao Shimin.

Others suggested the manipulation had actually captured a fundamental truth about officials, who appear to be giants beside Cheng.

"It truly portrays the social ecology: the image of officials is glorious, the people are small and humble! What a good [bit of] Photoshop; he is really talented!" wrote one, who called himself Big Ear Picture.

Another suggested the officials were actually looking at real estate when they were pictured – presumably because of their enthusiastic expressions. A third sent round a spoof showing them gazing at a scantily clad young woman.

An image of officials in Sichuan floating above the road they were supposed to be inspecting prompted similar ridicule and numerous parodies from internet users a few years ago.

Authorities insisted the visit had taken place but said the original photographs had been judged inadequate for publicity purposes. That picture looked almost naturalistic beside the Ningguo confection.

China has been exposed of its truecolour.

Photoshopping is ever so essential to project the marvels of China.
Last edited: Oct 30, 2013
W 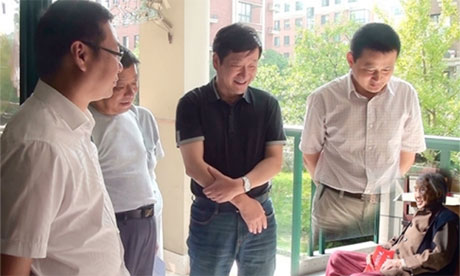 But authorities deleted it, apologised and ordered an employee to write a self-criticism after they were deluged with mockery by internet users.
Click to expand...

After he wrote the self-criticism, he was shot.

Surprising how the Chinese posters, who are so active elsewhere showcasing their 'wonders of the world' are absent from commenting on the seamier side of China.
You must log in or register to reply here.
Similar threads
Chinese and US officials scuffled over 'nuclear football' during 2017 Trump visit
Chinese officials warned US bomber during 'routine' East China Sea flyover
Chinese navy ships to be at Gwadar: Pak official
Britain's Queen Elizabeth II caught on camera calling Chinese officials 'very rude'
Share:
Facebook Twitter Reddit WhatsApp Link