Chinese companies banned from doing business in the U.S. for allegedly selling missile technology to Iran continue to do a brisk trade with American companies, according to an analysis of shipping records.

A unit of state-owned China Precision Machinery Import-Export Corp., for example, has made nearly 300 illegal shipments to U.S. firms since a ban was imposed on CPMIEC and its affiliates in mid-2006, according to an analysis of shipping records by the Wisconsin Project on Nuclear Arms Control, a nonprofit proliferation watchdog.

A Wall Street Journal review of the records and interviews with officials at some of the American companies indicate that the U.S. firms likely were unaware they were doing business with banned entities, and in many cases were tripped up by altered company names.

The CPMIEC shipments, worth millions of dollars, include everything from anchors and drilling equipment to automobile parts and toys. In many cases, CPMIEC acted as a shipping intermediary -- activity also banned under a 2006 presidential order.

The ability of CPMIEC and other foreign companies to continue doing business in the U.S. despite the sanctions comes as the Obama administration considers fresh economic sanctions against Iran. The illegal shipments suggest that U.S. sanctions have become so numerous and complex that they have become difficult to enforce.
More


"We spend a lot of time convincing other countries that we need tighter sanctions on Iran when we need to better enforce our own laws already on the books," says Wisconsin Project director Gary Milhollin, a former consultant to the Pentagon on nuclear-proliferation matters.

Responsibility for enforcing sanctions falls to the Treasury Department's Office of Foreign Assets Control, or OFAC, an office with 69 investigators and a 2009 budget of $29 million. OFAC is responsible for enforcing more than 20 sanctions programs targeting everything from nuclear proliferators and terror financiers to illegal imports of Cuban cigars.

OFAC hasn't fined any U.S. companies for trading with CPMIEC or other Chinese companies banned in 2006. In response to inquiries from the Journal, Treasury Department officials investigated CPMIEC and its subsidiaries further. On Thursday, OFAC added one CPMIEC unit to its list of banned companies.

"If we see U.S. companies that are knowingly engaging in transactions with a proliferation target or front company, or that those targets are attempting to circumvent U.S. sanctions, we pursue those cases aggressively," says OFAC Director Adam Szubin in an interview. Overall, he says, the sanctions program makes it difficult for nuclear proliferators to do business in the U.S.

In June 2006, the U.S. banned CPMIEC and three other Chinese companies from conducting business in the U.S., citing their alleged sales of missile technology to Iran in defiance of previous sanctions. Two months later, a shipment of oil-drainage tanks from Shanghai landed at the port of Tacoma, Wash., bound for a New York City firm, American Forge & Foundry Inc. The shipper: a unit of CPMIEC, according to a shipping record known as a bill of lading.

Officials at CPMIEC didn't respond to written questions from the Journal.
U.S. enforcement officials say it can be difficult for U.S. companies to avoid doing business with foreign companies and individuals under sanction.

Problems with translating company names can be an issue, they say. Sanctioned companies also have proved adept at creating aliases or subsidiary shell companies to mask their ownership, they say.

"To the extent that a U.S. institution does process a transaction for a designated entity, those transactions tend to be inadvertent and are corrected quickly upon detection," says the OFAC's Mr. Szubin.

It is unlikely that most U.S. companies knowingly flout the import bans: Criminal penalties for doing so include prison time.

John Iliff, general manager of American Forge & Foundry, says the single shipment of oil-drainage tanks it received in 2006 from the CPMIEC unit set off no alarms. "Trading in illegal goods certainly never crossed our minds," he says.

The shipment came from China JMM Import & Export Shanghai Pudong Corp., which didn't appear on any sanctions list until Thursday. Records indicate the company shares an address and phone number with a CPMIEC unit that was previously banned: CPMIEC Shanghai Pudong Corp. The Treasury determined that the two companies are affiliated. 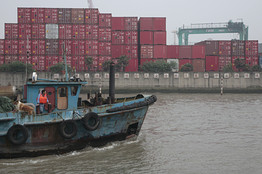 Bloomberg News
A Wall Street Journal review of shipping records and interviews with officials at some of the American companies indicate that the U.S. firms likely were unaware they were doing business with banned entities, and in many cases were tripped up by altered company names. Above, a boat passes by a container port in Shanghai, China in June.

Faced with simple tweaks to company names, even large U.S. corporations with sophisticated procedures for screening vendors can end up doing business with sanctioned firms.

Textron spokesman Michael Maynard says Greenlee was unaware of China JMM's relationship to CPMIEC before receiving an inquiry from the Journal. He says none of the parties to the 14 shipments appeared on any U.S. lists of sanctioned companies.

Many companies rely on software that is supposed to alert users if a company is subject to sanctions. But China JMM didn't register a "hit" on the sanctions-screening software used by Kohler Co. of Kohler, Wis., according to a company spokesman. Until July 2009, Kohler purchased lawn-mower parts from a Shanghai firm that used China JMM as its export broker.

After Kohler was alerted last summer to China JMM's affiliation with CPMIEC, it "immediately halted all orders...until our supplier found a new export broker," the spokesman says.

U.S. authorities have called CPMIEC a "serial proliferator." The U.S. first sanctioned the firm in 1991 and 1993 for selling short-range-missile technology to Pakistan. After passage of the Iran Nonproliferation Act in 2000, the company was sanctioned in 2002 and 2003 for missile-related sales to Iran.

The Chinese government, CPMIEC's owner, has objected to U.S. trade sanctions on nonproliferation grounds. "This kind of mistaken practice...damages the atmosphere for Sino-American cooperation on nonproliferation, and is not beneficial to promoting international nonproliferation efforts," says Jiang Yu, a spokeswoman for China's Ministry of Foreign Affairs.

In 2006, LIMMT Economic & Trade Co., a Chinese seller of metallurgical products, was blocked from selling goods in the U.S. for allegedly selling high-strength metals and sophisticated military materials to Iran.

In April 2009, a New York grand jury indicted LIMMT and its owner, Li Fang Wei, for allegedly conspiring to evade that ban by using aliases, and the U.S. Treasury updated its sanctions list to include those aliases.

Mark Mekeel, president of Coastal Flange, says U.S. prosecutors contacted him about his trade with Dalian, but told him he had done nothing wrong.
"Each day I'm pounded on email by offers from Chinese companies," he says. "But I'm not part of some scam. I'm just a guy trying to bring in some product."