Four times a year, 80 children from a remote village in the Pamir mountains set off on a school run that would make most parents blanch, scaling 1000ft-high cliffs and fording swollen rivers to get to class.

Four times a year, before and after the summer and winter terms, a group of teachers sets off to escort the children on the journey Photo: ALAMY
By Malcolm Moore, Shanghai4:33PM GMT 15 Nov 20116 Comments
The children, aged between six and 17 years-old, live in Pili, a village of some 400 herders and farmers high up in the foothills that separate China from Tajikistan and Afghanistan.
But their school lies some 120 miles away, 50 miles of which are inaccessible to vehicles and have to be crossed on foot, or by camel.
"There is only one way to get to the village, and you have to climb up in the mountains," said Su Qin, the head teacher at Taxkorgan Town boarding school, where the children study. "The village is completely cut off. The roads only take you further away," she added.
So, four times a year, before and after the summer and winter terms, a group of teachers sets off to escort the children on the journey. It takes at least two days and one night of trekking, and the children sometimes arrive at the school as much as a week after the beginning of term.
The most dangerous part of the route is a path, which narrows to just a few inches wide, that has been cut into a cliff face some 1,000ft above the valley beneath. Without safety harnesses, the teachers gingerly shepherd their charges along.
Related Articles
Dreaded school runs count for 300,000 minor accidents every year 13 Sep 2010
India plans 'world's most dangerous railroad' from Afghanistan to Iran 02 Nov 2011
Further along, there are four freezing rivers to wade across, a 600ft-long zip-line to slide down, and bridges that are just a single plank wide. Teachers often carry the younger children on their backs, but some have fallen in the rivers in the past, without serious injury.
"Actually the parents think it toughens the kids up, and gives them good experience," said Ms Su. "However, some of the parents are reluctant to let their children go to school. They are so cut off from the world they do not appreciate the importance that having knowledge will play in their children's lives." She said there had not been any accidents during the trips, which have run for the past two years, since the modern, three-floor school was built. "We make sure that it is always a responsible group of teachers and local officials that go, and they take good care of the children," she said.
"It is actually safer in winter because they can walk on the frozen river. They do not need to climb up the mountains and detour," she added. "Sometimes they can ride on the camels too." Ms Su said she had two boys from Pili in her music class at the school, and that both of them quite enjoyed the adventure of the trip.
"One of the boys is eleven and very talented at music, although less talented academically. He is definitely a leader. Even though he is the smallest kid in the class, he has the most authority. Both the boys are quite confident, in fact."
Guo Yukun, the local Communist party secretary, told China Central Television (CCTV) that a road is now under construction to the village. However, because of the difficulty of the terrain, it is not expected to be finished until late 2013.
"Our main task is to get these 80 primary and middle schoolchildren out of Pili village [and bring them to the school] safely. Our national policy is to make sure children have a free education. So the teachers take good care of them," he said.
Another official, named Sa'dan, admitted, however, that there are usually some jitters before the trips. "If anything happens to the children on the way, how could we face their parents?" he said. 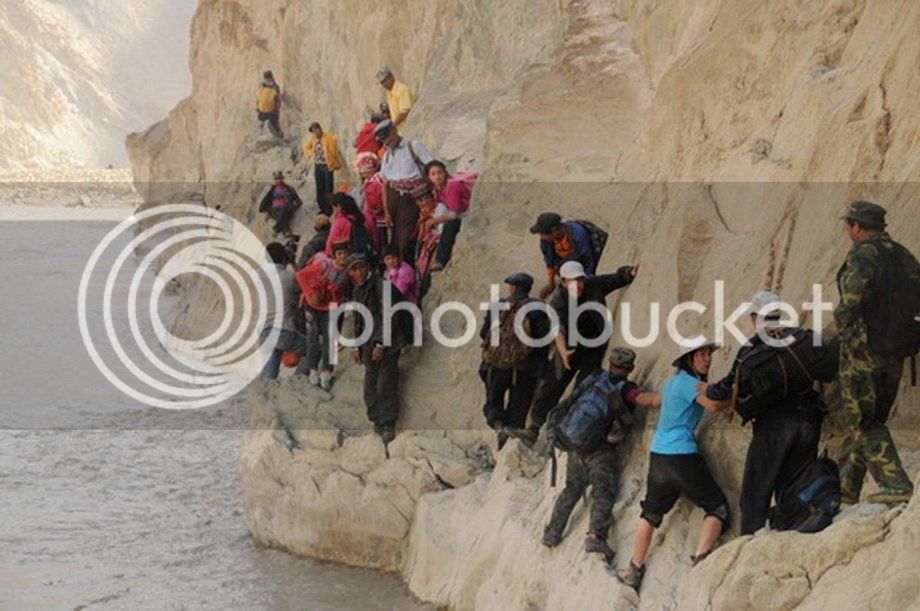 
Four times a year, 80 children from a remote village in the Pamir mountains set off on a school run that would make most parents blanch, scaling 1000ft-high cliffs and fording swollen rivers to get to class.

We traveled back to 3 years ago now, this being said, there are far more difficult roads than this, but kids still go to school.
Last edited: Jan 22, 2013
C

By the way, the 20 KM highway has been build up on sponsorship of the XJAZ, the mayor of the small town is now bidding for school bus.link:
http://roll.sohu.com/20120312/n337507489.shtml
please use google translator to read more.

TAKE THEM IN A BOAT
C

so that they can be stuck in between and starve to death? these rivers are not navigable. Not only because they are running on harsh reliefs tiered up like a waterfall park but also because they are shallow and full of sharp rocks in the river bed.
Those waters are glacier melt down , the township is trying to bottle them up and send to market for some extra cash.
Last edited: Jan 22, 2013
You must log in or register to reply here.
Similar threads
Chinese couples urged to have more children
Chinese children die in school wall collapse
For sale: Chinese babies and children
26,400 Chinese school children in toxic uniform scare
Share:
Facebook Twitter Reddit WhatsApp Link