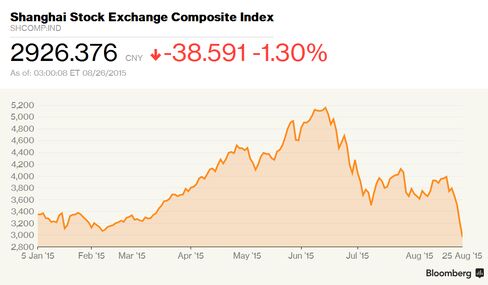 The Shanghai Composite Index fell 1.3 percent to 2,927.29 at the close, after rising as much as 4.3 percent and declining 3.9 percent. The cuts in borrowing costs and lenders’ reserve ratios were announced hours after the benchmark measure closed with a 7.6 percent drop on Tuesday.

Chinese equities have lost half their value since mid-June, as margin traders closed out bullish bets and concern deepened that valuations are unjustified by the weak economic outlook. The government has halted intervention in the equity market this week as policy makers debate the merits of an unprecedented rescue, according to people familiar with the situation.

“The prevailing sentiment is still that investors want to cash out, whatever the government does,” said Ronald Wan, chief executive at Partners Capital International in Hong Kong. “Confidence is already damaged. Doubts over the effectiveness of policies are getting bigger. The market will remain under selling pressure for a while.”