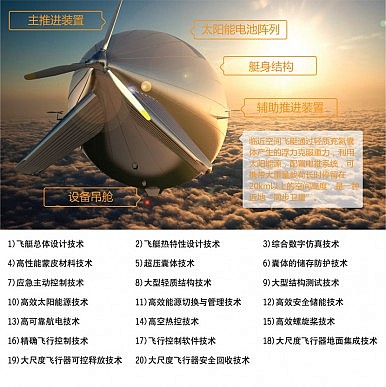 China has reportedly conducted a 48 hour test flight of its largest high-altitude airship, the Yuanmeng (Dream) in near space–the atmosphere between 20 kilometers to 100 kilometers altitude–IHS Jane’s Defense Weekly reports.

The Yuanmeng, according to a Chinese media outlet, ascended to an altitude of 20 kilometers at a test area near Xilinhot in Inner Mongolia using solar power to power its three propeller engines.

Beijing’s new high-altitude aircraft is one of the largest solar-powered airships in existence to date. According to Popular Science, the Yuanmeng has a volume of 18,000 cubic meters, a length of 75 meters and a height of 22 meters. It can carry a payload of 5 to 7 tons including“broadband communications, data relay, high-definition observation, space situational awareness, and airborne imaging systems” all powered by the sun.

A Chinese scientist involved with the project told Want China Times that the airship has been made of an extremely lightweight material capable of enduring tremendous pressure and that it is equipped with a highly efficient solar battery and lightweight avionics. “The biggest challenge for the near-space airship is the big temperature difference in the day and night,” another scientist told The People’s Daily Online.

The airship has purportedly been designed and built by Beijing Aerospace Technology Company and the Beijing University of Astronautics and Aeronautics (BUAA) first and foremost for civilian purposes such as weather monitoring, estimating crop yields, and disaster relief assistance.

However, according to a Chinese report cited by IHS Jane’s Defense Weekly, “from a national security perspective near-space steerable airships can rely on their height advantage for early warning, wartime communications support, or aiding attack platforms.”

During a future conflict where China’s satellite communications are blocked or satellites, in fact, destroyed through anti-satellite weapons, the Yuanmeng could as a communications relay station for Chinese aircraft and ships.

According to Popular Science:

Operating higher in near space means that the Yuanmeng would have constant line of sight over a hundred thousand square miles–an important requirement for radar and imaging. Increased sensor coverage means increased warning time against stealthy threats such as cruise missiles, giving Chinese forces a greater opportunity to detect and shoot down such threats. It would also be harder for fighters and surface-to-air missiles to attack near space objects.

While the airship will be vulnerable to missile attacks and other types of anti-satellite weapons, the Yuanmeng, equipped with sensors, could nevertheless serve as an early warning system in a future high-tech conflict. In particular, it could supplement China’s burgeoning anti-access/area denial capabilities by detecting incoming missiles, stealth planes, and warships from several hundred kilometers away.
Click to expand...

This has the potential to become a true game changer in the South China sea offering the PLA a chance to have a 24x7 real time view of the entire area. This weapon system has grave forebodings for the whole of south east Asia.

“Yuanmeng” is a colossal silvery airship and occupies 18,000 cubic meters. With the lift of helium it rises into the air, and then it is mainly powered by solar energy. The airship will stay near space for 48 hours according to plan.

Near space is the region of Earth's atmosphere that lies between 20 to 100 km (65,000 and 328,000 feet) above sea level. Impeded by the height and air density of the region, traditional aircrafts find it difficult to enter.

The U.S. and Russia are committed to scientific and technology research in near-space. American X-51A and HTV-2 hypersonic aircraft can maintain high-speed flight in near space.If an aircraft can fly at five times the speed of sound, it would only take one hour for it to fly across the Atlantic.

The airship can be used to conduct data relays, weather forecasts, ground surveillance and missile warnings. Near-space airship technology has a huge potential in military and civil fields, so China needs to advance their research in this field, Chinese aviation expert Wang Yanan said.

amoy said:
What is Shaoshaozian??

I believe the correct spelling is shashoujian, my mistake!

China has successfully tested its first independently made near-space airship. The technology will have a significant impact on civil and military services. 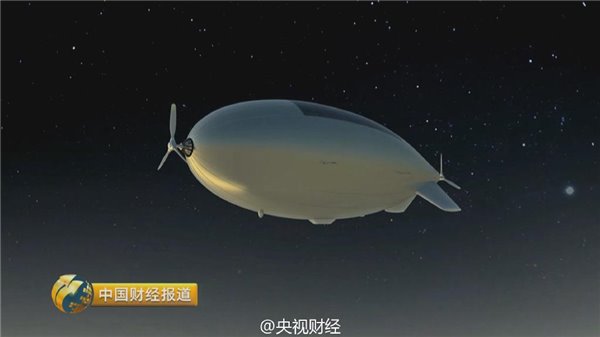 On a cold October day this year in China's Inner Mongolia Autonomous Region, about 100 scientists were busy preparing to test their independently developed high-altitude airship.

After a 22 hour flight around 20 kilometers above the earth, the airship successfully landed.

The project was jointly developed by Beijing University of Astronautics and Aeronautics and Chinese company Nanjiang Space.

"Near space offers a bridge between aviation and space exploration. Few projects have been conducted in this area. We had little previous experience to draw upon in terms of the environment we are dealing with. It has very specific requirements for the material and the overall performance of the aircraft. "

Airplanes can fly within 20 kilometers above the earth, while satellites operate above 100 kilometers from the ground. That leaves the middle section called near space, or stratosphere, which is yet to be utilized by humans.

Countries including Japan and the US have been vying to conquer this space in recent years.

The Chinese airship is named Yuanmeng, or "to fulfill a dream", referring to the Chinese dream to independently design and produce a near space ship.

Liu says the blimp is 75 meters long, has a volume of 18,000 cubic meters and a longest diameter of 24 meters. It can carry up to 300 kilograms in weight.

Finding the right material to enable long-duration flight has proven a challenge for scientists. The Chinese airship is filled with helium, so the frame of the ship must be also very light to allow it to float.

"The materials of the airship must be able to balance or cancel out the load of the aircraft itself. So we used high strength fiber in building the blimp. Secondly, the material must ensure very low levels of helium leakage. So we designed and produced the material based on these specifications."

Solar batteries are used to power the ship, which carries a volume equaling around 10 professional swimming pools. To lighten the weight of the batteries, scientists used membrane-like designs to power the ship.

Compared to planes and satellites, airships offer much lower costs. They do not need airports and can be used repeatedly. Most importantly, they can stay over a specific location for extended periods of time, which make them very useful in traffic or environmental monitoring. They also offer great potential in communications, intelligence gathering, electronic suppression and early warning systems.

The team behind the airship is already planning to commercially test the technology. Zhu Ming, Associate Professor at the Beijing University of Astronautics and Aeronautics says near space airships could prove very useful in civil missions.

"We look at the ships as low-altitude and stationery satellites, and they will be more useful in providing civil services. For example, the blimps can carry communication base stations and provide continued 4G services to coastal or certain other areas. "

The team plans to send three more ships to near space in 2016.