China's military has made dramatic progress in space over the past decade and the goals of its program remain unclear, a top American general said on Tuesday.Citing Beijing's advances in space, General Kevin Chilton, head of US Strategic Command, said it was crucial to cultivate US-China military relations to better understand China's intentions.

"With regard to China's capabilities, I think anyone who's familiar with this business -- and particularly our history in this business over the years -- would have to be absolutely amazed at the advancement that China has made in such a short period of time, whether that be in their unmanned program or the manned program," Chilton told reporters in a teleconference, referring to Beijing's space program.

"They have rapidly advanced over the last ten years," he said from Omaha, Nebraska.

"Where they're heading I think is one of those things that a lot of people would like to understand better, what their goals and objectives are. But they certainly are on a fast track to improve their capabilities," he said.

Chilton's comments came after a top Chinese air force commander, Xu Qiliang, called the militarization of space a "historical inevitability" and said that the country's military was developing offensive and defensive operations in space.

Chilton acknowledged that space had become an arena for military rivalry, with an increasing number of countries pursuing space-based weaponry -- including Iran and North Korea.

"Clearly, I think what we've all come to understand is that space is a contested domain. It used to be looked at like a sanctuary. And clearly that's not the case today," the air force general said.

Asked about the Chinese commander's remarks, Chilton said that Beijing's space program "is an area that we'll want to explore and understand exactly what China's intentions are here, and why they might want to go in that direction and what grounds might accommodate a different direction."

A Republican member of Congress adopted a tougher tone, criticizing China for pursuing space weapons and for shooting down a weather satellite in 2007.

"Despite public declarations to the contrary, Beijing's continued investment in anti-satellite technologies and yesterday's revelation by a senior Chinese military official, demonstrate a clear intent to pursue offensive space capabilities," Representative Michael Turner of Ohio said in a statement.

When President Barack Obama visits China in a tour of Asia this month, he should "pressure Chinese officials to provide greater transparency regarding their intentions for the development, test, and deployment of anti-satellite weapons," Turner said.

In January 2007, China shot down one of its own weather satellites in a test seen by the United States and others as a possible trigger of an arms race in space.

Turner said Obama should make clear to Beijing that further anti-satellite tests would be "irresponsible and unacceptable."

"I think maybe through dialogue we can better understand what their broader objectives are. I think that's one of the most encouraging things about the visit we had last week," he said.

US defense analysts have warned that the American military will soon lose its dominance on the high seas, in space and in cyberspace as China and other emerging powers obtain sophisticated weaponry and missiles

well, compared with Russia and USA, china still has long way to go......we don't take west praise too seriously. we will just do according to our plans and won't change our plan for west cheap praises.
J

badguy2000 said:
well, compared with Russia and USA, china still has long way to go......we don't take west praise too seriously. we will just do according to our plans and won't change our plan for west cheap praises.
Click to expand...

You sound almost offended....Does that mean that China will declare war one day if they continue throwing compliments at you like that ?!:lool::lool:
K 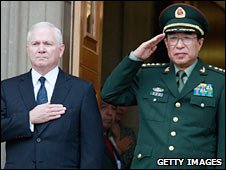 China has made dramatic improvements in its military capabilities in space, according to a senior US general.
General Kevin Chilton, commander of US Strategic Command, also said the US would like more information about China's intentions.
The comments come shortly after China's air force commander, Xu Qiliang, said military competition in space was a "historical inevitability".
The two countries have recently been looking to improve military ties.
Speaking to reporters, Gen Chilton said Beijing had made amazing progress in its space programme over recent years.
But he added: "Where they're heading... is one of those things that a lot of people would like to understand better."
Both countries have tried to improve military relations that were recently characterised as "on-again, off-again" by US Defence Secretary Robert Gates.
Last week Gen Chilton hosted a visit to US Strategic Command by Chinese General Xu Caihou, vice-chairman of China's Central Military Commission, the country's military decision-making body.
But while the trip was an effort to improve military ties, it is clear the two sides are also expanding their areas of competition into space.
In 2007 China surprised the world by shooting down one of its own defunct weather satellites.
And earlier this week Gen Xu Qiliang said competition in this area would continue.
"Military competition has shifted towards space. Such a shift is a major trend now, and such expansion is a historical inevitability," he told state-run media.
"To some extent, if you control space you can also control the land and the sea, and you will be in an advantageous position."
You must log in or register to reply here.
Similar threads
Pakistan & China Joint venture : Making IPAD Copies for military !
China's Xinjiang Military Region Military Reform in 2021
STUNG BY ‘ISSUES’ WITH CHINA-MADE TECH, PAKISTAN MILITARY IS BACK TO WOOING US FOR DEFENCE
China, Russia move closer to de facto military alliance amid US pressure
Share:
Facebook Twitter Reddit WhatsApp Link