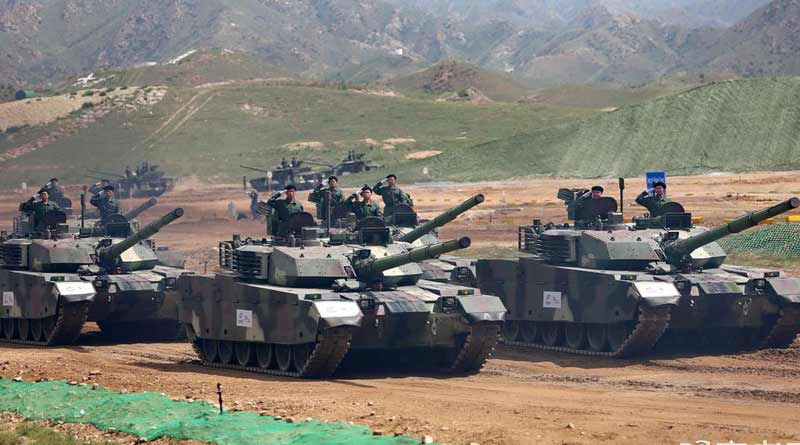 Daily Digital Desk: Prime Minister Narendra Modi himself hosted a special dinner on Friday for Chinese President Xi Jinping. And there was virtually no fault in Xinjiang's garlic satiety. However, to introduce Xinjiang in particular to the Southern cuisine, Friday's dinner was a delicacy of every kind of tongue-watering meal. However, Chinese President Xi Jinping is going to serve five state-of-the-art tanks in Pakistan's pans, even though he is a liberal in India.

It has been reported that Beijing will hand over five 'VT-1' tanks to the Pak army, such as Islamabad Bayana. Not only that, China has agreed to transfer the technology. As a result, these tanks will be manufactured in Pakistan. It is worth mentioning that in Turkey, Indian troops have expressed interest in South Korea's K-2, Russia's T-1 and China-VT-1 tanks. However, India has T-1 and Chinese tank is much cheaper than the rest. As a result, Pakistan decided to buy VT-1. Not only that, a few days ago, the Pak army and the Red Army launched a military exercise in China's Gansu Province. According to analysts, China will give Pakistan military support to keep India under pressure. As a result, Delhi-Beijing talks at diplomatic level, but India has to be prepared for any situation.

It should be noted that a year and a half ago, in China's city of Nayanaviram resort, Aditya, who had come to Delhi yesterday to meet in the domestic environment of the president of the two countries. The Chinese initiative to strengthen the Indo-China relationship began in China's Yunnan, with the rally in Mamlalapuram in Tamil Nadu. He will emphasize and discuss issues of diplomacy, Kashmir, Aksai Chin, Arunachal border, Doklam, Tibet, South China Sea, Xinjiang, Uyghur, Taiwan, Hong Kong, and all the recent issues discussed, suppressed and so on. There may be a different perspective. Because China can raise Kashmir issue in the interest of Pakistan. In turn, Modi might also raise the issue of human rights abuses, terrorism in Pakistan, etc. in Xinjiang, China. But to avoid discomfort, the main focus will be on commercial and investment discussions. The most startling fact is that the dinner and dinner, which began at 7pm in the evening between Modi and Xinjiang, is about three hours.
https://translate.google.com/transl...dern-vt-4-tanks-to-pakistan-army/&prev=search
W

This article is from Mahanagar news a bengal news paper.

WolfPack86 said:
This article is from Mahanagar news a bengal news paper.
Click to expand...

WolfPack86 said:
This article is from Mahanagar news a bengal news paper.
Click to expand...

Pretty much straight from napakistan then

Chinese junk is not a serious threat to us, let the porks have them.

We should fast track the deal to sale Akash, Brahmos to vieViet in a fast track deal.

The Ultranationalist said:
Chinese junk is not a serious threat to us, let the porks have them.
Click to expand...

Agree with you. I was about to say this.

The Ultranationalist said:
Chinese junk is not a serious threat to us, let the porks have them.
Click to expand...

I agree but Gifting billions to Russians to counter Chinese junk is also not a good idea we need to create cost effective systems in india to counter junks.

FSAPDS armour piercing round fired at point blank by a T 72 could not even scratch the Arjun's amour and porkis have put their faith in chinese junk. In war another town like Patton nagar would come up overnight.
You must log in or register to reply here.
Similar threads
China to supply 4 attack drones to Pak, prompts India to revive Predator-B plan
China overhauls Pakistan firepower, to supply 236 howitzer guns
China's Qinghai Province pilots 100% green power supply
India steps up supply of military equipment to Myanmar to counter China
Share:
Facebook Twitter Reddit WhatsApp Link