China will increase the number of its marine corps from 20,000 to one lakh to deploy them overseas for the first time, including at the strategic Gwadar port in Pakistan and military logistics base in Djibouti in the Indian Ocean.

The expansion was planned to protect China's maritime lifelines and its growing interests overseas, said Chinese military insiders. and experts.

Gwadar is a deep-sea port next to Strait of Hormuz, the key oil route in the Persian Gulf, built with Chinese funding. Although the port is not home to any People's Liberation Army installation, navy ships are expected to dock there at the facility in the future. Gwadar also connects the $46 billion China-Pakistan Economic Corridor through Pakistan-occupied Kashmir with China's Xinjiang.

Pakistan is itself setting up a Special Security Division comprising 15,000 troops, including 9,000 soldiers and 6,000 paramilitary personnel to protect CPEC and Chinese forces.

China is constructing a naval base in Djibouti to provide logistical support in one of the world's busiest waterways in the Indian Ocean. China denies it is an overseas military base but a centre to be used mostly for resupply purposes for anti-piracy , humanitarian and peacekeeping operations.

The expanded Chinese marine corps was part of a wider push to refocus the world's largest army away from winning a land war based on sheer numbers and towards meeting a range of security scenarios using highly specialised units, a news report in Hong Kongbased South China Morining Post said.

Chinese President Xi Jinping is reducing the size of the PLA by three lakh, with nearly all of the cuts coming from the land forces. The size of the navy will also grow by 15% from its current estimated size of 2.35 lakh personnel.

“Besides its original missions of a possible war with Taiwan, maritime defence in the East and South China seas, it's also foreseeable that navy's mission will expand overseas, including protection of China in the Korean peninsula, the country's maritime lifelines, as well as offshore supply deports like in Djibouti and Gwadar.“ naval expert Li Jie said.

I had always said that Gwadar is actually being built as a base for the PLAN under the guise of an 'economic corridor'. This has now been confirmed by the Chinese themselves. All their talk of it being only a 'logistics base' for resupply of Chinese ships for 'anti piracy ops' etc is absolute hogwash. Who are they trying to kid?

And now deployment of Chinese marines and navy at Gwadar is a guarantee against an Indian attack on Gwadar in the event of a full scale war with Pakistan as the Chinese would be involved too, or that is what Pak thinks. They are aware that a naval blockade by the Indian navy at Karachi and Gwadar like in 1971 will be extremely risky for India as the PLAN would get involved too. Nice strategy on the part of the Pakis.

This is one more step of china is making Pakistan her colony. I feel sorry for Nawaz sharif. This poor fellow wanted to improve the relations with India but that third rate general Zahil galich veoted the goodwill of Nawaz and push Pakistan into chaos. Now pakistan is in such a condition that you can have a mercy on them and nothing else.
R

Real fact is cpec is turning to be more costly than they thought now they have to place marines.... all India have to do is provide funds and weapons to balouchistan. And India should consider doing so... as it never seriously considered covert option and developed any assets.

raja696 said:
Real fact is cpec is turning to be more costly than they thought now they have to place marines.... all India have to do is provide funds and weapons to balouchistan. And India should consider doing so... as it never seriously considered covert option and developed any assets.
Click to expand...

They haven't factored in the cost of maintaining the newly raised Security Division of 15,000 troops and another 10,000 para military to guard the CPEC. That works out to roughly $70 million per annum for their pay and allowances and maintenance alone, an amount they have to spend every year till the cows come home...which will be never!
D

China has so far not experienced much 'blow back' of being a super power because it's relatively new in the field as opposed to US. But, with their economy gradually slowing down they would try to consolidate their hold in other countries and this will in return increase resentment of local peoples and regimes. This would also be felt in the regions that Chinese army has occupied like Tibet and Xinjiang. They are already forced to hold big army rallies in Xinjiang to maintain their power.
V

HIGHLIGHTS
NEW DELHI: An agreement to give Indian Navy access to the Duqm port in Oman will have far-reaching consequences for India’s strategic reach westwards and in the Indian Ocean. Seen together with the agreement with the UAE for joint naval exercises in the Persian Gulf in March, India is making slow but sure progress in pitching its presence in the area.

Last month, India and Seychelles overcame domestic opposition in the island nation to sign a revised agreement for India to build “military infrastructure” in the island of Assumption. A similar agreement for Agalega Island in Mauritius already exists. In 2017, President Ram Nath Kovind made Djibouti his first overseas stop — India and Djibouti are likely to establish diplomatic relations this year with an Indian mission in that very important post on the Horn of Africa. 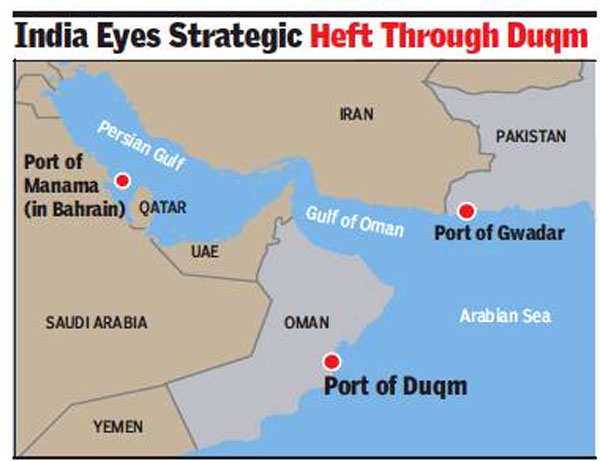 India was somewhat late in acknowledging the importance of Duqm — the US built its presence there in 2013-14, followed by the UK. Unable to resist the charms of Chinese investment, the Duqm port Commercial Terminal and Operational Zone Development Project saw China investing over $350 million in August 2016.

India has the closest political ties with Oman, also the longest. Its geo-strategic importance for India is unique as it sits atop the crucial waterways of the Persian Gulf and the Indian Ocean. More than that, Oman has been the original “non-aligned” country in that region — part of the Arab GCC, but maintaining close links with Iran, and now, the black sheep of the Arab alliance, Qatar.

The US used Oman’s good offices to reach out to Iran when they negotiated the nuclear deal, just as it was Oman’s intervention that helped India rescue Father Tom from ISIS captivity in Yemen. As India seeks to engage the Gulf countries more intensively, the Oman experience is invaluable.

In addition, Oman used to be the original Indian Ocean nation with territorial assets going south to Zanzibar, something that has been a basis for closer ties between India and Oman. While PM Modi has engaged the UAE and Saudi Arabia, somehow it seemed that Oman was falling through the cracks.

Foreign minister Sushma Swaraj made Muscat her first overseas call, but it has taken Modi four years to travel to Oman — partly due to Sultan Qaboos’ ill health. All three Indian military services conducted exercises with their Omani counterparts and both the Navy and Air Force use Oman’s Salalah for repair and refueling. But Duqm is different — it is completely artificial and created solely for economic and strategic use.

As China takes over Gwadar in Pakistan, India’s presence in Duqm is crucial as a security checkmate, giving India the ability to cut off China at the mouth of the Gulf of Oman. It is part of historical irony that Gwadar, which used to belong to the Omani sultan, was offered to India in the 1950s.

India had refused, on the grounds that it would not be able to defend it from Pakistan. Duqm in addition, gives Indian Navy a logistics multiplier as it seeks to counter China’s presence in Djibouti, and reach further westwards towards the Red Sea.

One lakh WTF ...
IS it for India centric or USA?
Are they preparing for War?

Many questions, after so-many years we will see a real war.
Chi+Paki+Noko Vs Rest of the civilized world

This is East India Company 2.0. Pakistan learned nothing from colonization.
G

Dovah said:
This is East India Company 2.0. Pakistan learned nothing from colonization.
Click to expand...

Pakistan didnt exist then. Thats why they have no experience.
I

soon chinese will import paki women to china. their one-child policy has left a skewed gender ratio favoring the men.

In this projected number of Chinese one lakh marines, there are too many zeros. A thousand probably will be the right number if at all Chinese marines leave their shores. Their first priority is South China Sea, everything else comes later.

Hari Sud said:
In this projected number of Chinese one lakh marines, there are too many zeros. A thousand probably will be the right number if at all Chinese marines leave their shores. Their first priority is South China Sea, everything else comes later.
Click to expand...

This was posted a year ago and clearly has not happened. 1 lahk marines? China does not even have that many. They number 12k in two brigades and hardly bigger than Taiwan's marine corps. Even with the planned expansion they would only be adding a third brigade.
T

So here's the question. With most of our oil and gas are shipped through Persian gulf , in event of war will Gwadar help Pakistan in choking our supplies off. ?
Like all ships meant for India can be easily targetted.
During last wars Indian Navy blocked Karachi and choked their supplies. This won't be the case now.

Or am I missing something from naval point of view

Dovah said:
This is East India Company 2.0. Pakistan learned nothing from colonization.
Click to expand...

Question is what is Pakistan? Pakistan is not a nation. Pakistan has many very decent people and a democratically elected government but their Mafias wearing uniform is running the country and kill people at their will. What pakistan does as a nation does not reflect the will of their people. It is run and exploited Mafias who does not have any love for Pakistan. They simply grabs the land and makes bid balances in swiss bank accounts. So any such logic to understand the behavior of Pakistan never successes.
You must log in or register to reply here.
Similar threads
China can deploy 5 Lakh troops on India border
Navy deploys large number of ships in Indian Ocean to send clear ‘message’ to China
China Deployed 12 Underwater Drones In Indian Ocean
China deploys 150000 soldiers on border of N Korea
Share:
Facebook Twitter Reddit WhatsApp Link