China sends artists to the countryside in Mao-style cultural campaign 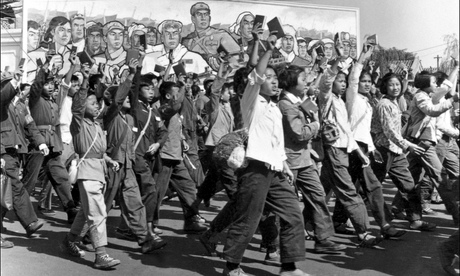 Chinese Red Guards and students in Beijing in 1966. Under Mao intellectuals and others were sent to work in the countryside.

China will send artists, film-makers, and TV personnel to live among the masses in rural areas in order to "form a correct view of art", state media have said.

The move is the latest by the ruling Communist party to echo the Mao Zedong era, during which intellectuals and others were "sent down" to labour among peasants in the countryside.

It comes weeks after the president, Xi Jinping, told a group of artists not to chase popularity with "vulgar" works but promote socialism instead, with state media comparing his remarks to a speech by Mao.

China's media watchdog "will organise film and TV series production staff on a quarterly basis to go to grassroots communities, villages and mining sites to do field study and experience life", the official Xinhua news agency reported, citing a statement by the State General Administration of Press, Publication, Radio, Film and Television.

Scriptwriters, directors, broadcasters and anchors will also be sent to work and live for at least 30 days "in ethnic minority and border areas, and areas that made major contributions to the country's victory in the revolutionary war", Xinhua added.

The move "will be a boost in helping artists form a correct view of art and create more masterpieces", Xinhua said, citing the media administration.

Beijing imposes tight controls over art and culture, and ideological restrictions have tightened under Xi, with authorities censoring Ai Weiwei and other artists it perceives as challenging its right to rule.

Joseph Cheng, professor of political science at the City University of Hong Kong, described the move as a Mao-style "rectification campaign" aimed at silencing potential critics as Xi leads a far-reaching anti-graft sweep.

"Xi Jinping is under considerable pressure, because his anti-corruption campaign certainly has hurt a lot of vested interests," Cheng said. "This is again a time of pressure tactics on the intelligentsia and on the critics."

The edict harkens back to the era of communist China's founder, when popular art was little more than propaganda, but Cheng said that whereas Mao's Cultural Revolution was aimed at the entire intelligentsia, the current move was more targeted.

"This campaign is a bit different in the sense that as long as you don't challenge the authorities – as long as you keep quiet – you are safe to keep making money," he said.

In October, Xi told a group of artists that they should not become "slaves to the market". The state-run China Daily likened his remarks to a well-known speech by Mao in the 1940s which outlined his view that the arts should serve politics.

"Art and culture cannot develop without political guidance," the paper said, congratulating Xi for "emphasising the integration of ideology and artistic values".
China sends artists to the countryside in Mao-style cultural campaign | World news | The Guardian
Click to expand...

Mao sent intellectuals and others were "sent down" to labour among peasants in the countryside during the Cultural Revolution.

Is this another form of Cultural Revolution wherein it will be used to purge the "impure" elements of Chinese society and revive the revolutionary spirit that had led to victory in the civil war 20 decades earlier and the formation of the People's Republic of China.

If not, then where is the connection between artists, film-makers, and TV personnel and "form a correct view of art"?

If villagers were the experts on the issue "form a correct view of art", then the villagers should have been taken to town to replace the artists, film-makers, and TV personnel. It would save money where they would not require training being experts.

Xi wants this to 'promote socialism'. It is an indication that all this aping of the West (vulgar is what they indicate indirectly?) has slowly given way to very 'dangerous' mindset that is growing to challenge the Communist Party and may even overthrow it, or possibly that is what is worrying the Communists.

It appears Xi is worried that he is losing his grip given that a large number of Communist functionaries who were having a free run and a ball are ganging up.

Hence, the same trick of Mao - use high sounding ideas but ensure that all opposition is crushed.

This 'exile' of a group who are slowly trying to assert themselves is a warning to others who wish to challenge Xi that they too will meet the same fate.

Re: China sends artists to the countryside in Mao-style cultural campa