China says it's pleased with strategic talks with India

China says it's pleased with strategic talks with India 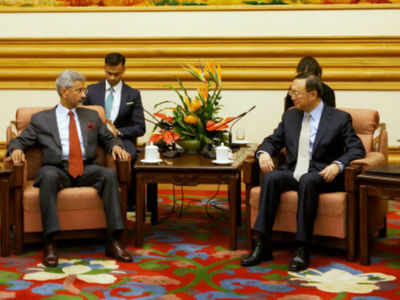 "The two sides had an in-depth exchange and comprehensive exchange of views and reached extensive agreements," Chinese foreign ministry spokesman Geng Shuang said at the ministry's regular briefing today. Officials on both sides "reached extensive consensus" while accepting the fact that "China and India have extensive converging interests and huge potential for cooperation," he said.
Jaishankar told Indian journalists on Wednesday that the strategic dialogue covered a wide range of issues, and resulted in better understanding of each other's perceptions on world affairs. But India was still strying to persuade China to change its stand on some sensitive issues while Beijing stuck to its opposition on censuring Pakistan based terroristUnited Nations Security Council, and allowing India to become a Disputes with India 'will persist', says China's state-run media


At Thursday's briefing, Shuang also said that "the dialogue reached the goals as expected, and is of positive significance for bilateral relations". The governments of the two countries charted out a programme for improving relationship in different areas in 2017 and advance "practical cooperation, strengthen coordination and cooperation on regional and international issues".


"The sound and steady development of India-China relations is in the fundamental interest of both countries and their peoples", he said. "The overall impression is this dialogue was held in a friendly atmosphere." he added.

Government departments in India and China will continue discussing several topics which came up during the strategic dialogue. They included issues like anti-terrorism, India's desire to join the NSG and Afghanistan's reconstruction and development.
http://m.timesofindia.com/india/chi...gic-talks-with-india/articleshow/57313451.cms

Because Chinas biach is pretty fcked up?
S

China only understands when kicked between legs. I would like to see continuation of the same get tough policy by India. China knows and has realized that her bullying is not working on any front.

Wasn't Jaishankar whining about CPEC passing through Gilgit Baltistan a few days ago? So China told him to shut up again?

Let hope these talk yield results, also I want government to ask for China to reduce its taxes for Indian exports.

possible chiness try to looking for right time negotiation...for azhar masood and NSG meter with india to out of away.
if that day came when chinees not want to war with US navy on south china...!
than US will play a world stratagy game.. than chines deal with india.

and chiness Not make and Obstacle for india To azhar masood and NSG...
(thats possible game)

The proof of the pudding is in the eating. So until the Chinese address our concerns and take action like in the cases of Masood Azhar and the NSG, it will just be more of the same.

They can ask a Paki official to STFU but not India's as they consider Pak to be its autonomous region and a pet poodle who will always do its bidding. India is a different ball game altogether.

You must log in or register to reply here.
Similar threads
BREAKING: Live updates: Trump says he and First Lady have tested positive for the coronavirus
CNN: China has saved hundreds of thousands of lives by reducing air pollution, study says
Uygurs in Xinjiang didn’t choose to be Muslims, China says in white paper
China says will not allow Hong Kong issue to be discussed at G20 summit
Share:
Facebook Twitter Reddit WhatsApp Link