China says it will join Russia in naval war games starting next month in the Sea of Japan and the Yellow Sea.

The official Xinhua News Agency quoted Defense Ministry spokesman Yang Yujun as saying Thursday that the exercise will begin in late April and run into May. The specific locations were not disclosed.

Yang says the joint exercise is aimed at improving cooperation and ensuring stability in the Asia-Pacific region.

China and Russia have conducted several joint military exercises since 2005 within the framework of the Shanghai Cooperation Organization. One of the exercise objectives will be protection of exclusive economic zones of both countries, reports Interfax citing the Chinese newspaper.

According to Renmin Ribao, Russia's Pacific Fleet (PF) will dispatch over 10 warships led by Guard missile cruiser Varyag to attend the exercise. Joint maneuvers will start in Vladivostok, Russia and finish in Qingdao, China. Main phase of the exercise will take place in the Yellow Sea.

"Joint naval exercise will be held within the framework of strategic partnership principles agreed by leaders of the both countries. Armament, support, and protection systems will be practically tested, as well as command and control systems of Russian and Chinese armed forces. Servicemen will practice surface and underwater tactics, test interoperability of combat systems, and effectiveness of automated control system, electronic and information warfare in accordance with methods of present-day naval operations", reported Renmin Ribao citing Leonid Sukhanov.

According to him, "participating naval forces will train prevention of armed conflicts in exclusive economic zones".

First Russian-Chinese joint naval exercise was held on Aug 25, 2005. Each country delegated one ship-based helicopter and three destroyers which, according to scenario, "delivered ASW torpedo and rocket bomb strikes upon enemy ships approaching the patrol zone".

Thats good for Asia to kick US out of here we all have to join together.

To bad, There arent any SSKs participating in these exercises.
W

Mr.Ryu said:
Thats good for Asia to kick US out of here we all have to join together.
Click to expand... 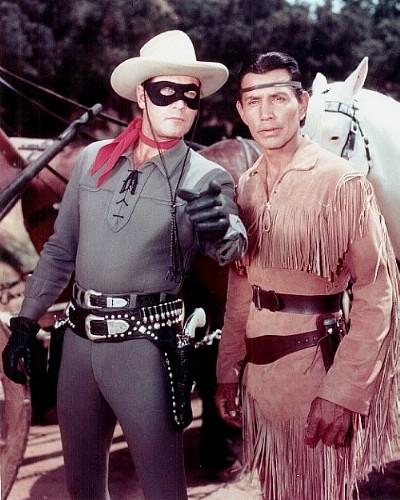 China and Russia have conducted several joint military exercises since 2005 within the framework of the Shanghai Cooperation Organization.
The group includes several Central Asian countries and aims to promote regional cooperation and check U.S. influence.

I'm bored for such a show following some kind of preset scenario to counteract 3rd part force.
Why not having a serious drill with making two sides fight against each other?
E


CHINA and Russia yesterday launched their first joint naval exercises, raising strange new dynamics in the balance of power in the region that has seen the US and India rattling sabres and tensions rise between China and its neighbours over territorial claims.

News of the exercises came as Japan splashed billions of dollars through the countries of the Mekong delta - Thailand, Vietnam, Cambodia, Laos and Burma - to offset China's growing influence.

Included in Japan's beneficence was a separate cancellation of Burma's entire $3.5 billion debt to Tokyo.

The six days of Chinese-Russian drills are taking place in the Yellow Sea off the city of Qingdao in Shandong province on China's east coast, the official China News Service said.

China and Russia have held four joint military drills since 2005, but these are the first dedicated naval exercises, a Chinese expert said.

Yin Zhuo, who advises the Chinese navy, said the number of ships involved was unprecedented - China has 16 naval vessels and two submarines taking part in this exercise while Russia has four warships.

"Both sides will have deep exchanges in terms of tactics and technology," Mr Yin told state television.

Beijing and Tokyo have a long-running dispute over a chain of islands, called Diaoyu by China and Senkaku by Japan, which sit in rich fishing grounds that may harbour lucrative energy resources.

Further south are groups of mineral-rich islands contested between China, The Philippines and Vietnam.

Japan's defence ministry said in a recent report that China was becoming increasingly active in waters near Japanese territory while Russia was holding more frequent military exercises in its far east region.

It another flare-up that erupted earlier this month, China and The Philippines dispatched vessels as they lay claim to a group of islands in the South China Sea. The islands are said to be rich in oil and natural gas and straddles strategic shipping lanes vital to global trade. Last Friday, India successfully tested a nuclear-capable missile in a move aimed at China.

The locally built Agni-V missile can now travel 5000km - or comfortably as far as most of China, including Beijing and Shanghai, which many in India view as a decisive step in narrowing the nation's military gap with its neighbour.

In return, The Global Times, a tabloid published by China's Communist Party mouthpiece, the People's Daily, warned India not to be "arrogant" "India should be clear that China's nuclear power is stronger and more reliable. For the foreseeable future, India would stand no chance in an overall arms race with China."

To counter China's influence in the fast-growing, resource-rich region, Japan yesterday said it would provide Burma, Thailand, Vietnam, Laos and Cambodia with $7.18bn in development aid over the next three years to help build up infrastructure, including high-speed rail, port and water supply projects.

Tokyo said its decision to erase the debt owned by Burma came because "it is essential for the people of (Burma) to be able to enjoy the fruits of reform taking place".

The US and Australia have eased some key sanctions against Burma, and the EU has indicated it will probably suspend most measures next week, but Japan, Burma's largest creditor, is the first developed country to reach a deal on outstanding debt.

For Burma's President Thein Sein, who last week became the long-isolated country's first head of state to visit Japan in 28 years, the bilateral deal with Japan removes a multi-billion-dollar debt hurdle that had made it difficult to access new funding from a country that had once been one of Burma's biggest benefactors.

Japanese companies are eager to tap into the newly emerging Burmese market.

The country's business association Keidanren called on the government last week to resolve the debt issue so firms could invest in potentially lucrative infrastructure projects in Burma such as railroads and electricity.

No that''s not the 1st joint naval exercise. During August 2005 China and Russia held the 1st one, also off the coast of Shandong.

Another Photo: take a good look of the deck's top coat.

Anti-skid coating on the deck... 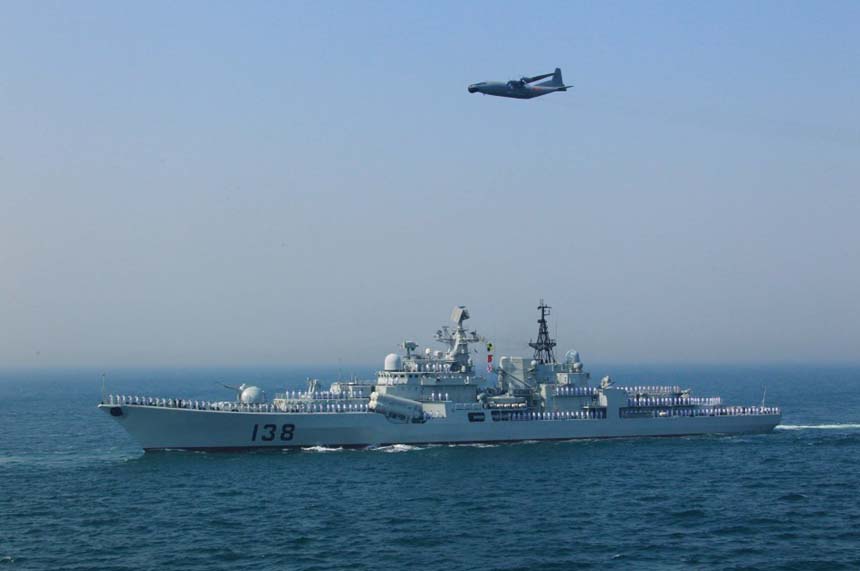 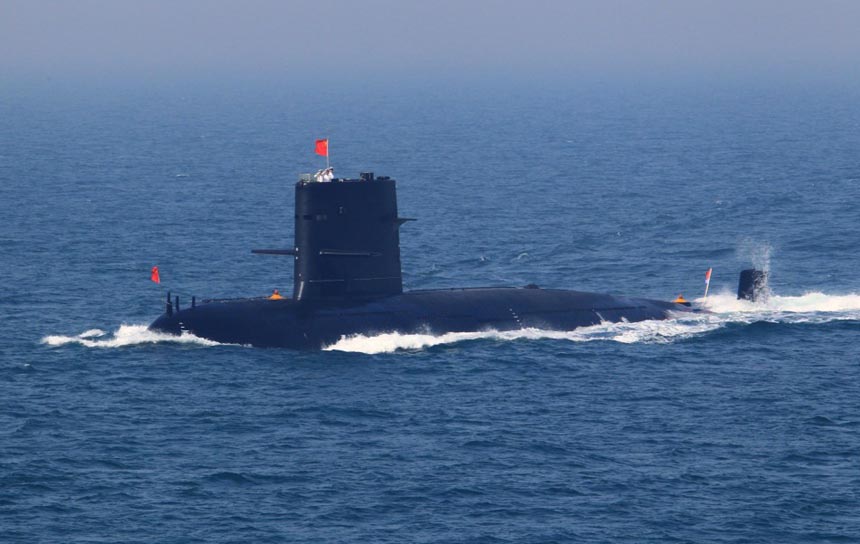 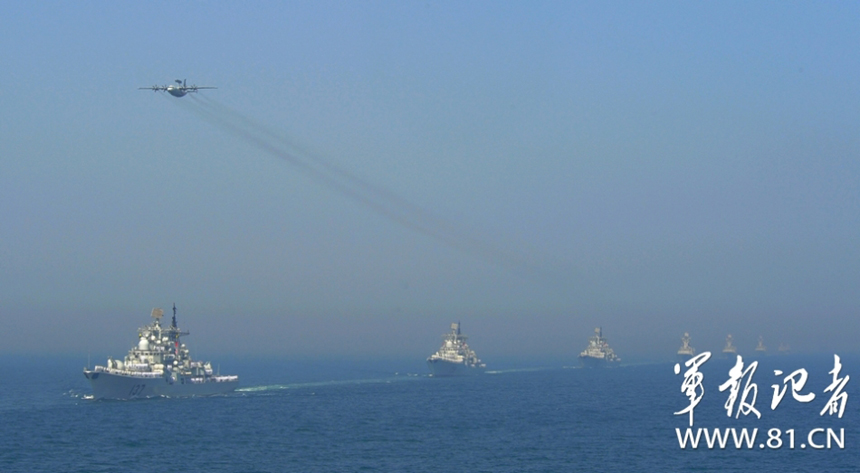 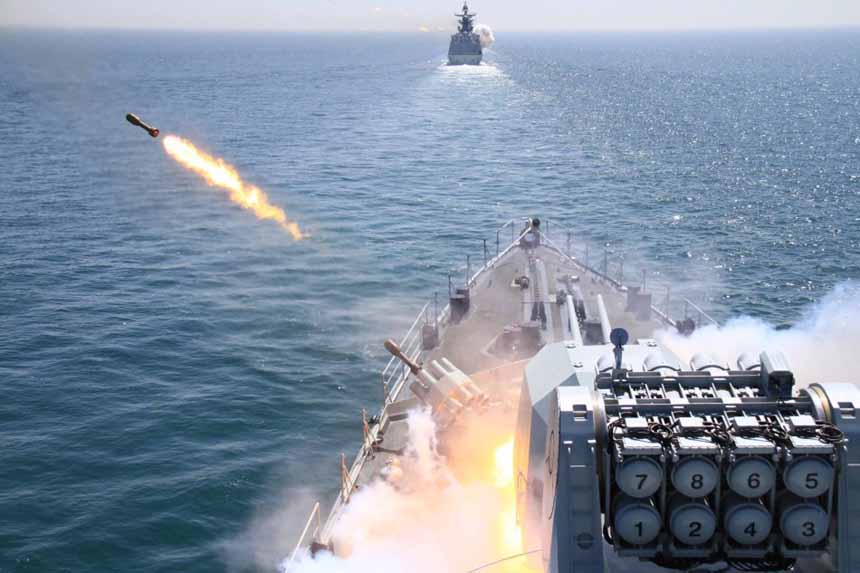 A live ammunition exercise is seen on April 26 on the Yellow Sea off east China's port city of Qingdao at the end of a six-day joint naval exercise between China and Russia. Six warships, including the Chinese navy's missile destroyer DDG-112 Harbin and Slava-class guided missile cruiser Varyag, flagship of the Russian Navy's Pacific Fleet, rendezvoused to fire hundreds of shells at surface, underwater and air targets. There was also a fleet review involving 19 warships and 19 aircraft from both sides. [Photo/www.81.cn]