The Sri Lankan government has emphasized the launch was a private effort, carried out by SupremeSAT (Pvt) Ltd and the China Great Wall Industry Corp. But Sri Lanka President Mahinda Rajapaksa's youngest son, Rohitha, has been credited in domestic media as the creator of the satellite.

Vijith Peiris, chief executive of SupremeSAT, told Reuters in Colombo that the launch from the Xichang Satellite Launch Centre in western China was successful.

The joint launch marked the latest in a series of economic and military ties between the two countries, a relationship that is being closely watched by India.

"It reinforces the impression that Sri Lanka is getting slowly but surely closer to China," said Brahma Chellaney, an analyst at the Centre for Policy Research in New Delhi.

"From a larger geopolitical perspective, it sends a message to India that a country in its own backyard is cozying up with China."

Economic and strategic rivals China and India fought a brief, high-altitude border war in 1962 and still have contested regions, though the defence relationship has improved.

Rhetoric flared anew recently after China issued a new passport with a map that shows two disputed border areas as Chinese territory. India responded by stamping its own map on visas it issues to holders of the Chinese passports.

China has been the largest lender to Sri Lanka, a $59 billion economy, since the end of a three-decade civil war ended in May 2009. China had provided military equipment to the Sri Lankan government to defeat ethnic Tamil rebels.

Since then, Sri Lanka has sought stronger defence ties with China, a fact that has irked India and the United States.

It is also involved in a coal-fired power plant, expressways, railways and irrigation works.

India has not officially protested the increasing Chinese influence in Sri Lanka and has even said the latest corporation on space technology was not a concern.

"It's a commercial communication satellite. It's going to be in a Chinese (orbit) slot and not in a Sri Lankan slot. At that far, you can't do anything and it's not a concern for us," said an Indian diplomat based in Sri Lanka, speaking on condition of anonymity.

China, like other nations with the technical capability, has launched numerous satellites on a commercial basis for other countries.

Sri Lanka is an independent country and can do business with whomsoever it desires; of that there is no doubt.

It is cheap to launch in China and the Chinese satellites go cheap.

Therefore, Sri Lankan choice is correct since every penny counts for Sri Lanka,having fought a very expensive insurgency with the LTTE.

But the question is why does SL need to launch a satellite of it's own, where it has no say. They do not even have tracking stations or even capability to operate the satellite. It is the same case with Pakistan. In both cases China build the satellite, launched it and is operating it and credit to them making money out of the deal.

They do this mainly to piss off India

Sri Lanka is a gone case, Maldives is showing you its teeth.

I have requested this before that Srilanka should be in countries on watch section.

India would be fool if not militarily helping Vietnam.

the SL people are an arrogant bunch of fools who think that by doing these kinds of things they can make us uncomfortable!what they don't realise is that if India decides to punish them for their deeds china won't be able do anything to help those islanders!
A

well what i like china is how they make money , look just to piss-off india , srilanka payed china to launch chinese made satellite. what did srilanka gained in it. any know-how how to make satellite.

While it maybe true that it was to needle India, but would SL be totally wrong to use China when the satellite and the launch is the cheapest in the world.

People do prefer things cheap when the chips are down.

And SL has to recoup from its expensive anti LTTE campaign.

They also have to eat!

If they asked us, ISRO would have helped them by launching the satellite at lower cost than usual.

Another puppet in the making. What is with our neighbours and there tendency to become dirty juttis of others ? 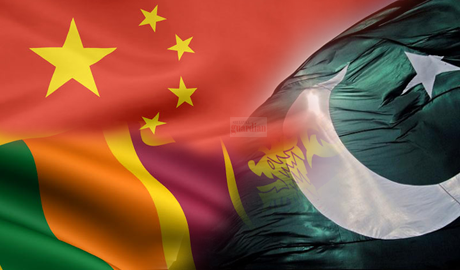 Chini-Sinhali-Paki Bhai Bhai Bhai. Or should we say brotherhood ?

It is just a satellite, what are you guys so pissed off, insecurity at its best display.

Who said we are pissed? We are discussing the trend in SL Chini relations. It makes india very comfortable and happy.

good work SL is really doing good with china
A

hahahahaha.. Chinese talking abt insecurity!! You made my day

Please do not assume & speak from your closed mind like the legs in your avatar. Please open both.

By the way , I appreciate China's generosity towards Shrilanka.


Patriot said:
By the way , I appreciate China's generosity towards Shrilanka.
Click to expand...

Nothing to do with generosity. Such launchings generate good profit. Russia and US have been in this business for a long time including private spaceflights. Relatively speaking China is a beginner in the commercial launching market having served so far Nigeria, Venezuela, Bolivia, Turkemenistan, and Hughes of the US Next in the list is DR Congo.

Look at below S. Korea attempted yesterday the 3rd time, but no doubt Russians, anyway have churned out good profit

This is the first glitch found in the Korean-made portion of the rocket. Russia made the first-stage liquid-fueled rocket, while Korea produced the second-stage solid-fuel booster plus its fairing and the satellite it is to carry into space.

Korea invested over W520 billion (US$1=W1,084) in the rocket program, which began in 2002. Russia agreed to provide up to three rockets if the first two launch attempts fail. So far, Korea has tried twice -- the first time in 2009 and the second in 2010. The first attempt failed due to a fairing malfunction after the launch, and in the second the rocket blew up shortly after liftoff. Scientists were unable to pinpoint the exact reason for the second failure.
Nov. 30, 2012 09:23 KST
Click to expand...

Except Bhutan none of our neighbours are reliable today. Even Afghanistan (it has a pro-pakistan section too) is more reliable than BD, SL and Nepal.
You must log in or register to reply here.
Similar threads
China's To Launch A New $1.4 Billion Port City Sri Lanka
US military aims to launch nuclear moon rocket before China does
China to launch 3rd aircraft carrier in two years
OneSpace to Launch China’s First Private Rocket
Share:
Facebook Twitter Reddit WhatsApp Link