China As attitudes evolve, progress can be achieved on same sex marria

As attitudes evolve, progress can be achieved on same sex marriages[/PHP]
By Linda Xu Source:Global Times

I attended a special wedding anniversary celebration recently. It was held by a gay couple. They neither have a legal marriage license nor did they get "married" in public, but they have been known as an openly gay couple among their intimate friends for 16 years.

The party was private. The two men, wearing matching rings, blended in perfectly with their straight friends. They pledged they wouldn't separate until death. All attendants, both heterosexual and homosexual, felt happy for them and wished them the best.

Compared with advancements in same sex rights in other countries, China lags far behind. But now there is more tolerance and acceptance of homosexuality in China, especially in big cities and among young people.

Earlier this month, wedding photos of a British diplomat and his American boyfriend in Beijing went viral on Weibo. The post drew thousands of comments, with the vast majority of the commentators congratulating the couple. One netizen encouraged more same sex couples to come out and announce their unions, pushing forward the legalization of same sex marriage in China.

My gay friend and his mate are also hoping to cement their relationship by getting a legal marriage license, so that they can enjoy all the rights of married straight couples. However, China still has a long way to go in terms of homosexual acceptance and legalization of same sex marriage.

In many places of the country, especially the vast rural areas, gay and lesbian couples are still stigmatized. They are considered sick, shameless and dirty, and as a result, millions of homosexual people have migrated to urban areas to be the people they really are.

Besides, although some gays or lesbians confess their sexual orientation to friends, they don't come out to their parents unless the parents are very liberal.

The past year has witnessed great progress in same sex rights in some Western countries such as the UK and the US. Many same sex weddings took place after gay marriage became legal, which is inspiring in China.

Will the legalization of same sex marriage come to China? There is still no sign of this. But we could be optimistic and become more open to embracing progress. At least, compared to years ago, China has made strides in tolerance and acceptance of homosexuality, and there is actually increasing public awareness of gay marriage in China.

A few activists have been striving for pushing forward homosexual rights. It won't be an easy task and will take time. I am not discriminating against gays or lesbians, and I hope you won't either.

Linda Xu, a white-collar employee based in Beijing

As attitudes evolve, progress can be achieved on same sex marriages - Global Times
Click to expand...

Homosexuality is quite common in China or so one infers and so they are tolerant.

That is why they. use the word 'Tongzhi (åŒå¿—,)' which means 'same purpose' but was used in earlier days for "Comrade', and now for a homosexual.

— She dawdles, not daring to move closer, / Afraid he might compare her with leftover peach.

The Chinese society has been quite liberal and 'modern' historically.

Here is an example of how emancipated they were and are. 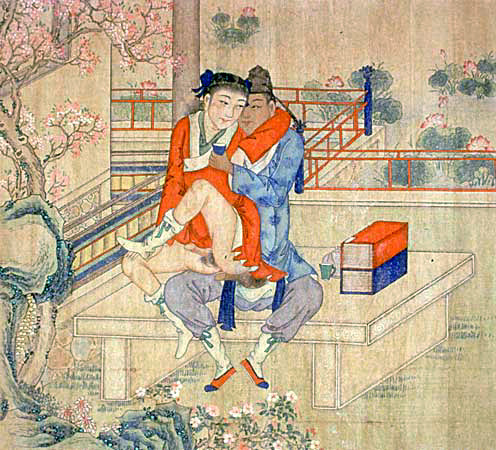 Just a clarification: being appended since it is in the public domain and can be seen at Kinsey Institute, US.

There is a skewed gender ratio that has led to a variety of social problems, including homosexuality in China.

However, if you are persuaded that homosexuality is in part influenced by social factors, then it is worthwhile to explore what impact such a large population of unmarried men might have on the issue of sexual orientation. There is already a thriving LGBT (lesbian, gay, bisexual, and transgender) community and subculture in China, but as 'coming out' continues to find acceptance and support in the younger generations, will this significant gender imbalance have any effect on the perspective of the LGBT community in the China's future mainstream consciousness?
China's Growing Problem Of Too Many Single Men - Forbes
Click to expand...

Therefore, if you can't beat them, then join them is China's way and so same sex marriages are gaining ground.
You must log in or register to reply here.
Similar threads
Non-Military implications of India-China Standoff 2020
Stocking up for a Possible Indo-China War in Sept-Oct 2020
GREAT WALL OF SHAME: They Signed The Letter Calling On Canada To Surrender To Communist China
India China Standoff 2020 Memes, Joke Thread
Share:
Facebook Twitter Reddit WhatsApp Link