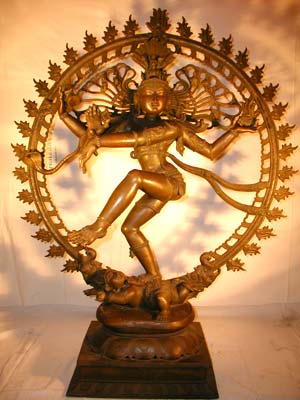 When I visited Chidambaram Temple as a boy of twelve during a school tour , my teacher told me about Chidambara Rahasyam (secret of Chidambaram). Who will not be fascinated by that dancing Lord, Nataraja ? Since then, I have read many articles about this Secret . Each referred to one but no two was the same. I always thought that there must be a bigger secret than all I have heard.

Recently, I read something which took me nearer the truth in this pursuit of this secret of secrets. As usual, I am sharing here all that I learned upto now . Most of the statements are in numbered format and given as short as possible.

Lord Shiva dances here in Chidambaram. Before we speak of the Dance , we will explore the stage that is Chidambaram.

A temple is called ‘Kovil’ in Tamil. It literally means( Ko- il) the abode of the Lord. Whenever the mere name ‘kovil’ is mentioned, it specially means Chidambaram which is split as Chit( gnana or wisdom) + Ambaram ( akasa or space) .

Structure of a typical Siva Temple

A classical Siva temple as per Agama rules will have five prakaras or circuits each separated by walls one within the other. The outer prakaras will be open to the sky except the innermost one. The innermost one will house the main deity as well as other deities. There will be a massive wooden or stone flag post exactly in line with the main deity.

The innermost prakara houses the sanctum sanctorum ( karuvarai in Tamil). In it sits Shiva, the supreme Lord.

Symbolism behind the structure of a Shiva Temple

1. The temple is so constructed as to resemble the human body with all its subtleties.

2. The five walls encircling one another are the kosas ( sheaths) of human existence .

a. The outermost is the Annamaya kosa , symbolizing the material body.

b. The second is Pranamaya kosa , symbolizing the sheath of vital force or prana.

c. The third is Manomaya kosa, symbolizing the sheath of the thoughts, the mana

d. The fouth is the Vignyana maya kosa, symbolizing, the sheath of the intellect

e. The fifth and innermost is the Ananda maya kosa, symbolizing the sheath of Bliss.

3. The sanctum which is in the prakara symbolizing the Ananda Maya Kosa sheath ,

houses the lord, seated as the Jiva within us. It is to be noted that the sanctum is an

unlit space, just as if within the heart closed on all sides.

4. The entry Gopuras are likened to the feet, as resembling a person who is lying on the

back with the toe up.

5. The flag post depicts the sushumna nadi which raises from the Mooladhar (base of the

spine ) to the sahasrar ( vertex in the head).

6. Some temples will have three prakarams. There they represent the stoola, sukshma

represent all the five.

Chidambaram temple and its symbolism: 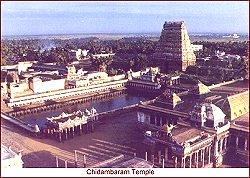 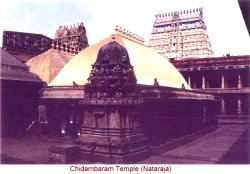 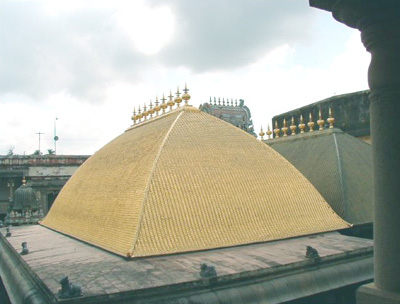 Saint Thirumoolar, whose legend is intricately woven with Chidambaram, says in his thirumanthiram

transliterated into English, it reads

Meaning: “Sivalingam is of the form of the human body; So is Chidambaram ; So is Sadasivam ; And so is his divine dance”.

1. The temple has the above five prakaras resembling the sheaths.
2. Nataraja gives dharshan from the sanctum called Chit Sabha with a golden roof.
3. The roof has 26,000 golden tiles (see picture), denoting the number of breaths of a person in a day.

4. These tiles are fixed to the wooden roof with the help of 72,000 nails depicting the number of nadis (the invisible ducts carrying energy to various parts of the body)
5. As the heart is to the left of the body, the sanctum in Chidambaram is also aligned slightly leftward.
6. On top of the Chit sabha roof, we find nine kalasas (made of copper) depicting the nine shaktis (powers)
7. The roof has 64 cross wooden reapers denoting the 64 arts.
8. The artha mandapa has six pillars denoting the six shastras
9. The mantapa next to the artha mantapa has eighteen pillars symbolizing the eighteen puranas.
10. There are five steps leading to the Chit sabha from the Kanaka sabha depicting the five lettered Panchakshara mantra ( Na ma chi vA ya)
11. The Chit sabha roof is supported by four pillars symbolic of the four Vedas.

1. Nataraja’s dance is said to indicate the five divine acts which are

a. Creation . Nataraja dances with a small drum called damarukam in one of his
right hands. Easwra is nada brahmam. He is the origin of all sounds (nadam).This is
the seed (vindu) from which the tree of the Universe emanated.

b. Protection (Operation)- In another of the right hands, he shows the ‘Abhaya
Mudra’, meaning he is the kind protector .

c. Destruction; He has fire in one of his left hands , symbolizing destruction.
When everything is destroyed by fire, only the ash will remain which the Lord has
smeared on his body.

d. The foot which is planted shows the act of hiding

e. The raised foot shows the act of bestowing

2. Nataraja swamy has the Vigraha ( icon) of Devi Sivakama Sundari to his left . This symbolizes Ardhanareeswara , ‘ the Lord who has the female as his left half’. To his right there is a screen. When the deeparadhana – showing lamps takes place to the swamy and to the left side , the screen is removed and we see five vertical long hangings of golden vilva leaves. We see nothing behind it. Sivakami shows the Saguna Brahman (the God with a form) that is Nataraja . The Saguna Brahman leads us to the Nirguna Brahman (the God without form or the God who has formlessness as his form). This is told as ‘Chidambara Rahasyam’ by the Dikshitars , who are the traditional pujaris in the temple.

4. Lord Maha Vishnu also saw the Divine dance. In a nearby mantapa called Chitrakoota, Maha Vishnu, gives us dharshan in his fully reclining Yoga Nidra pose on the snake bed. If one stands on a small lotus sculpted on the floor slab in front of Narayana, one can at the same time see Nataraja in his right side.

5. Sages Patanjali and Thirumoolar also saw Nataraja’s dance in Chidambaram. Their figures are embossed on the Silver doors of the Chit Sabha.

I think you enjoyed reading the above. Nataraja Rahasyam is said to have come to Tamilnadu from the Indus – Saraswati civilization. The Saiva Agamas, which teach tantric Saivism, reveal much more than the above. Next time you visit Chidambaram, remember all this, and worship Nataraja who will grant you release from the pains of the worldly life and show you the path of Gnana.
E

SATA... I bow to thee for going in so deep into the subject... In fact, there was this serial on Sun TV or some other channel by the same name "Chidambara Ragasiyam"...

I think Chidambaram must be one of the few places where Shiva is worshiped in his 'tandava murti'.I won';t be an exaggeration to say that the 'Ananda Tandava'(cosmic Dancer) is the greatest ever Visual art form ever conceived in our recorded history.No other piece of art work has veer been so able to bring a spiritual concept to such visual brilliance.