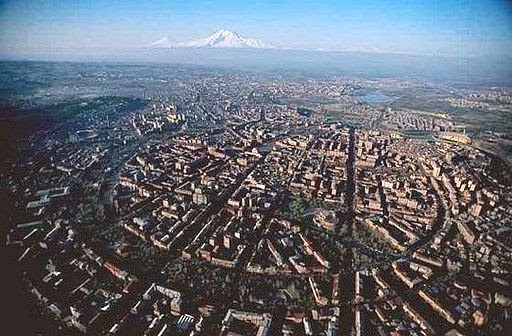 In Ramayana, the most ancient poem written in human history, sage Valmiki describes about a circular city which is towards west of bharata khanda (India).
When Seetha, wife of Raama was kidnapped by Raavana, king of Vanaras (humans with tails who wander in forest) Sugreeva sends 4 brigades in 4 directions to search her.

To the brigade that was supposed to travel west, he gives a route map which will lead them to Astagiri (Asta = sunset, giri = mountain). He asks them not to travel beyond Astagiri, as that is culmination point in west direction. Sugreeva directs the 'vanaras' to travel towards west from the Vindhya mountains of India, right up to the fourth quarter of the (Arabian) sea, via a point 'where the Sindhu(Indus) river falls into the sea'. The Indus joins the Arabian Sea at Karachi in today's Pakistan.
Going along this route, the fourth quarter of the sea would bring the Vanaras to the 'Persian Gulf'.
Here, Valmiki describes a coastal mountain by the name 'Hemgiri', whose peak is so high that it seems like touching the sky.
They will also encounter a waterlogged mountain named 'Paariyatra', which means that they travelled sea-side along the persian gulf. Then he describes Mount 'Vajra', which shines like a diamond – might possibly be a reference to the peaks of what is today known as the Zagros Range.
After crossing this, Vanaras would see a structure/city which looks like a 'wheel with a thousand spokes' on Mount Chakravan.
This city or structure was built on this mountain by the celestial architect 'Viswakarma'.
This is where 'Sudarsana Chakra', the weapon of Lord Vishnu was created by Viswakarma.
This could be the city of Yerevan in Armenia, which is one of the oldest continually inhabited cities of the world.

This is proof that Ramayan was real

josan420 said:
This is proof that Ramayan was real
Click to expand...

If the poem is indeed is describing a city of circular lay out ... then there is some thing to know about the ancient texts.

One thing is sure that the ancient epics whether it is Ramayana or Mahabharata they describe the places, geographic locations and events with respect to time correctly.
J

what about adam bridge??? Ramayana and Mahabharat both weere real events but not as we see in tv series. May be it was technology, not gods magic. read more here: Myth of Ancient Nuclear War | Mystery of india
J