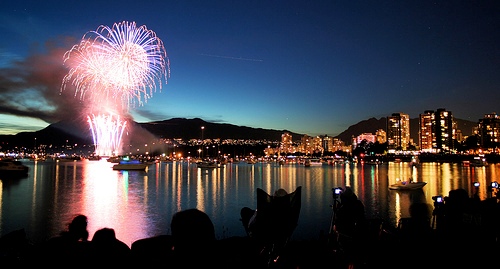 The good times roll in Vancouver


Vancouver, Canada, 28 July 2009. As Americans, we often jokingly poke fun at our northern neighbor by referring to Canada as the "51st state". We say they talk funny; their baseball is no good, and their beer is overpriced. And don't forget the ice hockey jokes. But really, I think we're just jealous.

To start with, we're envious of their solid healthcare system. Discussions on the healthcare reform underway in the US now often refer to Canada's system as a cheaper and better model. It seems to be the benchmark by which we judge our own.

The US healthcare system comprises 15.2 percent of GDP while Canada's is only 9.7 percent. And it still outperforms the US system by all measures. The life expectancy in the US is 78 years. Canada's is 81.

Car manufacturers have been moving jobs north for years to avoid the high healthcare costs in the US. Now Ontario is the largest carmaker in North America, even out-producing Michigan.

The next obvious point of envy is the Canadian banking system. It is the world's healthiest, according to The World Economic Forum. The US banking system ranked 40th while Britain's is 44th.

Despite sharing a huge border and plenty of trade with the US, Canada has not been contaminated by the financial epidemic which has brought down the US economy.

It hasn't had a single bailout, bank failure or need for government to interfere with its financial system.

US banks are leveraged at an average of 26 to 1, while Canadian banks only borrow 18 to 1. Even worse is European banks, which are geared 61 to 1.

Canada has stuck to the tried-and-true rules of banking, borrowing, and risk. It has remained conservative and sensible, and hasn't been tricked into thinking it could beat the markets, unlike much of the rest of the world.

Housing, the root of the US credit crunch, is also remarkably robust in Canada. While prices have dropped about 12 percent in Canada during the crisis, they have dropped twice that in the US.

How about that irritating budget deficit the US carries? Canada doesn't have that problem – it has run a surplus for the past dozen years. It now has cash that can pull it out of any economic drags it may be facing.

Immigration is another issue. Criteria to live in Canada are based on education, work experience, language skills and other merit-based criteria. It is not xenophobic like the American system that only permits a few of the many who want to work and live in the US.

As a result, Canada is drawing skilled and educated manpower, mainly from Asia. Microsoft even set up a Vancouver research center specifically to attract "highly skilled people affected by immigration issues in the U.S."

It might be cold and icy, but Canada has the fundamentals of healthcare, finance, and the economy down. And they still love beer and baseball.

What planet is he from?

Unemployment is up. Retail sales is down. Line ups for critical medical services can be as long as a year to the point where rich Canadians simply bypass the system and pay for it in the US.
You must log in or register to reply here.
Similar threads
Authoritarian State of Canada
Canada’s mass graves and history of persecution of indigenous population in the western world.
GREAT WALL OF SHAME: They Signed The Letter Calling On Canada To Surrender To Communist China
Muslim Charity in Canada Caught Giving Money to Hizbul Terrorists
Share:
Facebook Twitter Reddit WhatsApp Link