Cain and Able?: How India's Sugar Demand is hitting Brazil

Cain and Able?: How India's Sugar Demand is hitting Brazil

The price of raw sugar is hitting highs not seen for nearly three decades - and the surge is having a sweet-and-sour effect on two of the burgeoning Bric economies.

Brazil is the largest producer of sugar in the world

Sugar futures reached more than 24 cents a pound this week, the dearest they have been since February 1981.

That makes it a valuable earner for the Centre-South region of Brazil, the largest sugar-cane growing area in the world.

At the same time, Brazil's position is strengthened by a collapse in production in India, the world's number two sugar producer.

The weakest monsoon rains in the Asian subcontinent for many years have led to widespread drought, hitting crops hard. 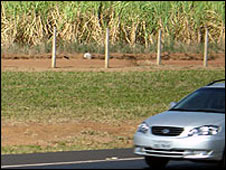 Brazil is the largest producer of
sugar in the world​

However, India remains the top consumer of sugar and is relying on Brazilian imports to make up the shortfall.

Up to one million tonnes of Brazilian sugar have been bought by India in recent weeks, according to traders' estimates - and producers are betting that prices may climb as high as 30 cents a pound before the current run peaks.

All splendid news for Brazilian sugar plantation owners, you might think. But whereas India has had a shortage of rainfall, Brazil's cane crops have been waterlogged by heavier-than-expected downpours.

Sugar-cane needs dry weather to ripen in order to maximise its sucrose content, but northern Sao Paulo state, one of the key areas of cultivation, has had its heaviest August rainfall in 60 years. 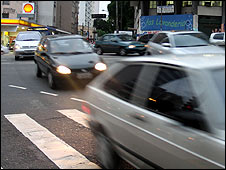 That means more customers chasing less of the sweet stuff - and those customers include not only people with a sweet tooth, but also the majority of Brazil's motorists.

In recent years, more and more Brazilian sucrose has been turned into ethanol rather than sugar, as the country's roads have seen a huge increase in the number of "flex-fuel" vehicles that run on a mixture of petrol and alcohol.

More than 90% of new cars in Brazil are adapted to accept ethanol as fuel, thanks to a state-run biofuel programme that began during the country's years of military rule as a way of reducing its dependence on oil imports.

So far, the cost of alcohol at the filling station has not reflected the 80% rise in raw sugar prices since the start of this year.

However, pump prices have started to creep up in recent weeks, and analysts expect them to rocket after the end of the sugar-cane harvest, which lasts from April to November.

"India is demanding sugar, which is priced 40% above cost, while alcohol is being sold below cost," says Arnaldo Luiz Correa of Archer Consulting in Sao Paulo.

For that reason, he says, factories will switch production from ethanol to sugar, pushing up fuel costs.

If world sugar prices remain high, farmers are bound to plant more canes in future, in the hope of cashing in on the boom.

There is already pressure on owners of prime Brazilian farmland to divert their resources from other crops, such as oranges, in favour of sugar.

Brazil is the world's biggest producer of orange juice, shipping both frozen and chilled produce around the world in specially-refrigerated vessels.

But orange groves have to be cultivated for several years before they bear useful fruit - and they need much more attention than sugar canes.

In India, the trend appears to be going the other way.

Many farmers moved away from sugar-cane in 2008 because they could get better, government-guaranteed prices for other crops, such as wheat and rice.

But irrespective of how much sugar Brazilian plantations can produce, the product is useless to foreign markets unless transport links allow it to be shipped to where it is needed.

And according to a recent report by the country's Institute for Applied Economic Studies (Ipea), a government research body, Brazilian ports are badly in need of investment. 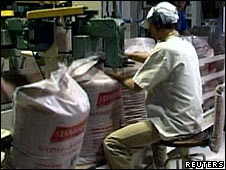 Processed sugar is just one use for Brazilian sugar-cane these days
Sugar-producing areas in north-eastern Brazil are served by ports such as Maceio and Cabedelo, which Ipea says are decaying facilities with poor installations.

In all, Ipea says 43bn Brazilian reais ($23.5bn) should be spent on upgrading the country's ports before the global economy recovers from the current downturn.

With sugar exports soaring, even Brazil's better-equipped ports are operating at close to full capacity. The current sugar rush looks set to be a real test of the country's infrastructure.

This is a result of gross managment by our country where we have come to a situation that we are forced to import large quantities of sugar from the international market.

I do not understand since last year we had normal monsoon where is the question of sugar stocks depleting. The monsoon has been a cause of concern this year and the crushing season will commence only from October november. Shortages if any should have come by the middle of 2010 and not in this year.

It is high time we get our priorities right for this crucial sector.
You must log in or register to reply here.
Similar threads
Meet the Two Vietnamese VinFast SUVs You'll Be Able to Buy in the U.S.
Chinese team test jet engine ‘able to reach anywhere on Earth within 2 hours’
China able to deploy warplanes on artificial islands any time: U.S. think tank
NSA able to target offline computers using radio-waves
Share:
Facebook Twitter Reddit WhatsApp Link