Dry taps, untreated sewage and piles of solid waste strewn all around.
This can become a stark reality of our urban landscape by 2030, when India's urban population will grow from 340 million in 2008 to 590 million — 40 per cent of the total population — and twice the present population of the United States, predicts a report by McKinsey & Company.
But this gloomy picture can be turned around if India invests $1.2 trillion (Rs 54 lakh crore) to keep pace with the growing urbanisation, says the report, India's Urban Awakening: Building Cities, Sustaining Economic Growth, which was released on Thursday.
India's current per capita spending of $17 (Rs 784) on urban infrastructure is just 14 per cent that of China's $116 (Rs 6,030).
The report states that if existing services are not improved drastically, the per capita water supply to a average citizen could drop from an average of 105 litres to only 65 litre a day in the next 20 years. Also, 70-80 per cent of the sewage generated in the country would go untreated, while of the 377 million tonne per annum solid waste that would be generated by 2030, only about 295 million tonne will be collected because of inadequate facilities.
The National Capital — with a GDP of $296 billion (Rs 13.32 lakh crore) — will become the largest economy by 2030, overtaking India's financial capital Mumbai of $265 billion (Rs 11.92 lakh crore). But India's IT hub, Bangalore will replace Delhi as the city with the richest individuals. The number of middleclass households in the country (earning between Rs 2 lakh and Rs 10 lakh) will increase from 32 million to 147 million.
Thirteen cities will have a population of more than four million by 2030 with five states — Tamil Nadu, Gujarat, Maharashtra, Karnataka and Punjab — likely to be more than 50% urbanised. Also, 70% of India's GDP will come from cities — up from 58% — and drive a near fourfold increase in per capita incomes. "India's approach to urbanisation is likely to result in urban gridlock and chaos, jeopardising the 7.4% growth rate. India needs to act with urgency for the well being of its citizens and economy," says Ireena Vittal, partner, McKinsey & Company. 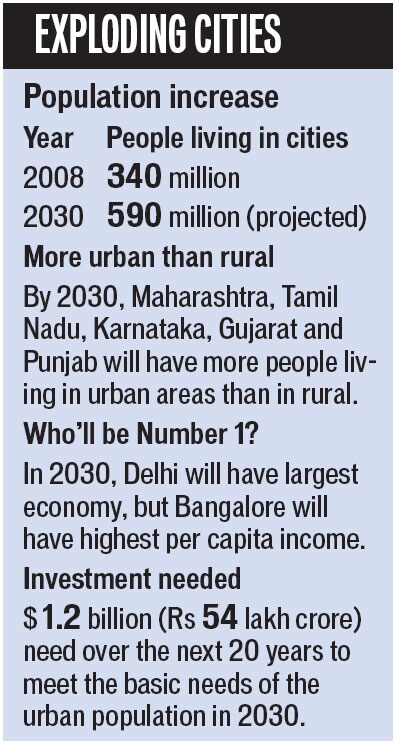 To make cities libable: $2tn over 20 yrs - Times of India

NEW DELHI: India will need to spend an additional $2 trillion or almost one-and-a-half times it's entire current GDP — over the next 20 years to provide basic services to its urban population, says a new report on India's urbanisation by the global consulting firm McKinsey. Half of this will be needed to wipe out the deficit in services and half to cater to future growth: the report projects an urban population of 590 million by 2030, 40% of the country's total projected population.

India currently has an annual capital expenditure of $17 per capita on urban infrastructure, far below China's $116 and New York's $292. Transportation and affordable housing will be the two sectors needing most of the capital. The report recognises the depth of the urban housing crisis and says that government will be required to directly construct 60% of the affordable housing stock, while 40% can be cross-subsidised by the market.

McKinsey's prescriptions on funding this scaling up of infrastructure, however, are likely to be controversial. The report proposes that 76% of the over $1 trillion operating expenditure for new infrastructure be raised through user charges, while by McKinsey's calculations, 36% of the capital and operating expenditure together is today covered by user charges. Similarly, close to 60% of the $1.2 trillion capital expenditure for the future should be raised by monetising land, the report proposes. In fact for Tier I and II cities, the report says that 80-85% of expenditure can be covered by their internal revenues including property tax. Simultaneously, the report calls for a tripling of the Jawaharlal Nehru National Urban Renewal Mission fund.

Urbanisation, already lopsided across states in India, will remain so by McKinsey's projections Gujarat, Maharashtra, Karnataka and Punjab will join Tamil Nadu in being more urban than rural by 2030. In 20 years, India will have 68 million-plus cities, 13 four million-plus cities and six megacities of over 10 million.

The report does, however, see cities as the drivers of prosperity. Cities will account for nearly 70% of India's GDP as against 58% in 2008, assuming an average annual GDP growth rate of 7.4% over the next two decades, the report projects. However, Tier I and II cities are not growing at their potential and are not outperforming the national average as cities in China, for example, do, the report notes. In fact Tier III and IV cities are growing almost as fast as far bigger cities with far greater municipal investment.

Where the report is likely to diverge with other prescriptions for India's urban development is also in its placing of faith in Tier I (over 4 million) and II (1-4 million) cities. The report calculates that it is more cost-effective to provide basic services in densely rather than sparsely populated cities and high-end services like airports are cheaper to run in Tier I than Tier III cities. While the report does also talk of development in smaller towns, its continued emphasis on big cities is likely to be at odds with calls for more dispersed urban growth.

What is up with the news.

HT is either ringing the alarm bell
or ringing "a" bell to get people to read their news
You must log in or register to reply here.
Similar threads
By 2030, five Indian cities would have economies as big as middle-income countries today
400 more fighter jets in Indian Air Force’s vision 2030
Will India surpass China with in 2030?
Maharashtra will become trillion dollar economy by 2030
Share:
Facebook Twitter Reddit WhatsApp Link