British woman Naheeda Bi 'held captive in Pakistan for 10 years'​
Woman from Glasgow claims she was forced to fix guns in slave labour camp, but police and Foreign Office say they are puzzled 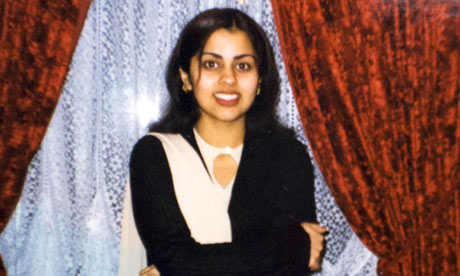 British detectives are investigating claims that a British woman spent 10 years working in a slave labour camp in Pakistan after being abducted while visiting relatives.

Naheeda Bi, 28, from Glasgow, says she was held hostage at a terrorist camp in a tribal area after she was seized by two men at Islamabad airport in April 2000 following a holiday with her mother.

In a newspaper interview, Bi said she was put to work repairing guns with other captive women. She said that her uncle Masood, who was sent to the airport to help her, was also abducted and kept captive for the past 10 years.

Her allegations – not yet verified – are being examined by detectives from Strathclyde police, the Serious Organised Crime Agency and Pakistani authorities.

Her case has puzzled the Foreign Office and the police, raising doubts about her experiences. Unusually, her case was largely unknown to the outside world. No ransom demand was made to the family.

In 2000, Bi's family told the Foreign Office and Pakistani authorities that she had been abducted. But the ministry had no further record of contact until her brother telephoned in 2007 to say she had been missing since 2000.

The next contact was on 28 May when police told the Foreign Office that Bi's abductors had been in touch with her family. British consular officials in Islamabad arranged for an emergency passport.

Police say this is a very unusual case because of the time period and the lack of contact with her alleged kidnappers.

Her claims follow the case of five-year-old Sahil Saeed from Oldham, who was kidnapped in Pakistan earlier this year.

In an interview with the Daily Record, Bi said her captors had originally discussed ransoming her for Â£500,000. But after two months of isolation, sedation and beatings, she was taken suddenly to a camp and put in a room with 20 others.

"The room was full of people who had been kidnapped, even kids. They treated us badly. People would be dragged by the hair from one place to another, they would be verbally abused and beaten," she said.

Women were separated from men and made to work. She said: "There were parts of guns and every day we would work, no matter how ill we got. We would polish gun handles, filing them, cleaning them."

She suffered bouts of illness and severe weight loss, and was routinely abused, she said. After being moved twice to other locations, she was suddenly released three weeks ago and dumped with her uncle and other hostages in Dera Ghazi Khan, Punjab.

Bi now believes she was held in the Swat valley in North-West Frontier province.

It is understood her uncle returned to his home in Pakistan after being freed.

The family's MP, Ann McKechin, first became aware of the case after her release. She has previously helped the family on unrelated visa issues, but has not yet met Bi to discuss her case. She said she had advised the family to urgently organise trauma counselling.

She said: "I have been in touch with the family in Glasgow and have offered my assistance to her as soon as she returns.

"This is a particularly distressing case for all concerned."

Detective Chief Inspector Andy Gunn of Strathclyde police said: "We are absolutely delighted that Naheeda has been reunited with her family and are happy to have played a part in her safe return to Glasgow. Obviously she has been through a terrible ordeal over the past 10 years and we will continue to support Naheeda and her family in every way that we can.

"We will continue to liaise with the authorities in Pakistan and the Foreign and Commonwealth Office to aid them with their ongoing investigations."

Ahh.. the wonderful facts of Pakistan that come out when captives and oppressed come out and speak their minds...poor woman happens to be another victim of the famous Thekedaars.

Tshering22 said:
Ahh.. the wonderful facts of Pakistan that come out when captives and oppressed come out and speak their minds...poor woman happens to be another victim of the famous Thekedaars.
Click to expand...

Yes the criminals who abducted her were supported by ISI... just like every crime in india.

Pakistani Nationalist said:
Yes the criminals who abducted her were supported by ISI... just like every crime in india.
Click to expand...

Tshering did not mention ISI at all. Why did you see a reason to bring them in? Thekedaars could have meant anything from the powerful to criminal elements or the establishment.