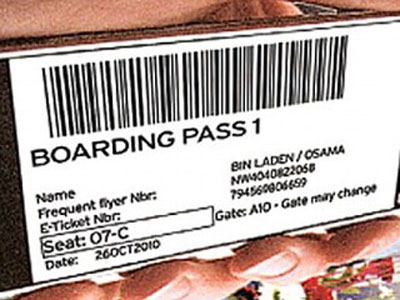 It just seems like a bad time for any firm with the word "British" in its title. We know all too well the various setbacks experienced by the oil giant once known as British Petroleum; now British Airways has drawn much unwelcome attention to itself with a photo touting its new mobile-boarding pass system as it appears to expedite the air travel of al-Qaida leader Osama bin Laden, the world's most wanted man.

The photo appeared in the LHR News, the company's internal staff magazine covering London's Heathrow Airport. The image accompanied an article spelling out the benefits of the mobile-boarding setup, which permits users of mobile digital devices to print out their boarding passes on the fly. The boarding pass reads "Bin Laden/Osama" and appears in the graphic panel of a user's iPhone. (AT&T reception in remote Pakistani caves is apparently better than anyone might have guessed.)
What's more, the image features a frequent-flier number for passenger bin Laden — so much for all those airport terrorist watch lists — and has him flying first class on Oct. 26, 2010. As the travel site Gadling.com mused, "sadly, knowing the brilliant minds behind the anti-terror organizations, the terror level will be raised to 'red hot' on October 26, 2010, while airport police all over the world try to figure out which airport the most wanted terrorist in the world will be flying to."
So how did this happen? The short answer is that no one knows — or at least, no one's telling if they do. A British Airways spokeswoman told ABC News reporter Scott Mayerowitz that "a mistake has been made in this internal publication and we are working to find out how this occurred." And in response to a follow-up call from Yahoo! News, another spokeswoman for the airline remained firmly on message, saying, "We're still working to find out how this occurred at this time."
The gaffe could be the result of a tasteless prank that got out of hand — but current speculation is running toward the theory that it's the handiwork of a disgruntled employee. British Airways is currently locked in a labor dispute with the union representing its cabin-crew workers, and the strike has grounded flights for thousands of travelers in one of the busiest travel times of the year. At issue in the labor fight is a proposed cut in the base salaries for new flight attendants. The company estimates that it has lost more than $150 million in revenue during the dispute.
Between the union woes and the Osama PR setback, British Airways executives must be fondly reminiscing about last summer, when the major controversy was the airline's plan to sell ad space on its online boarding passes.
You must log in or register to reply here.
Similar threads
Launch: LVM3 M3 with 36 OneWeb (British) Satellites (Second lot) - March 2023
Launch: LVM3 M2 with 36 OneWeb (British) Satellites - 22 October 2022 00:07 IST
Larsen and Toubro wins British Royal Navy design contract to develop bid for building Fleet Solid Support ships
Piracy - Root of british capital.
Share:
Facebook Twitter Reddit WhatsApp Link